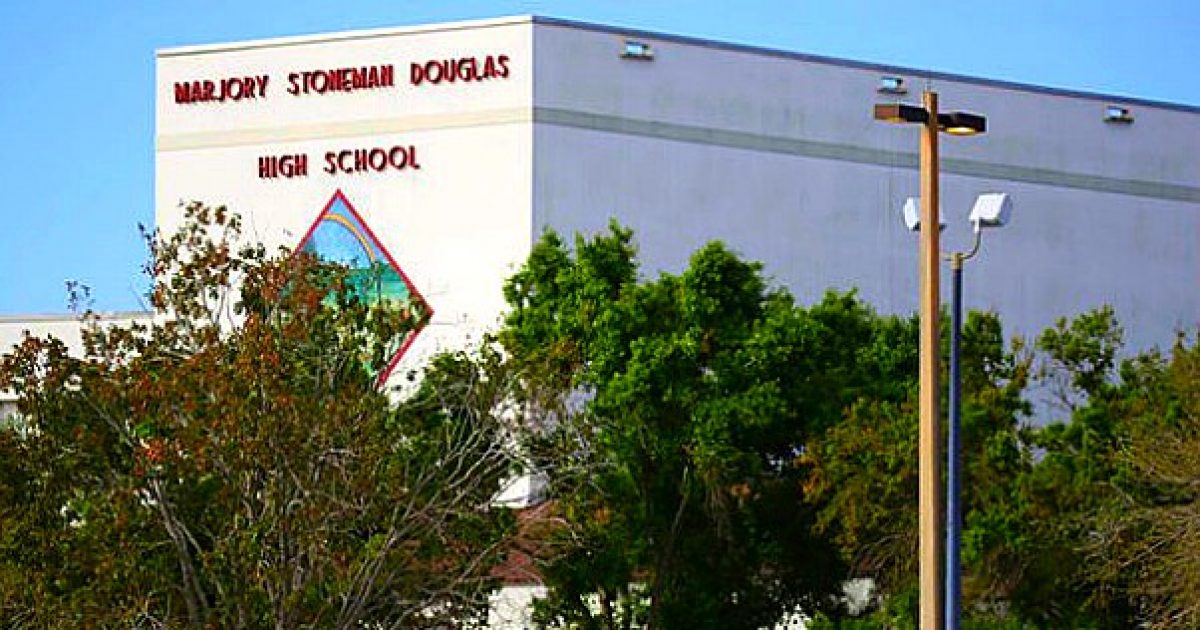 A few weeks ago, we broke the ‘real’ story behind the shooting at Marjory Stoneman Douglas High School.

We explained that the real reason the shooting at Douglas occurred was because of the failed leftwing policies put in place by the Broward County School District and their accomplices at the Broward County Sheriff’s Office. These policies allowed Nikolas Cruz to run afoul of the law on more than 30 different occasions (including acts of extreme violence), and still pass a background check when he went to purchase his gun.

In the wake of the Douglas High School shooting, these problems should be too big to hide.

Sadly, instead of covering the ongoing corruption of the law that has been happening in Miami-Dade and Broward counties since 2012, the media has chosen to focus their fire on gun control.

Instead of worrying about guns, the media should be asking how could local police pay 39 different visits (Broward Police claim it was “only” 23 visits) to one student without that student ever spending significant time in prison or a psychiatric ward. They should be asking why the local police wouldn’t share information about this high school kid with social services or other law enforcement agencies.

The truth is that our laws and law enforcement procedures were enough to stop the Douglas High School shooting before it ever happened, but because of the corruption sowed by the Broward County School District and local police leaders, those laws and procedures were ignored.

If the procedures (and laws) had been followed, Cruz would have never been allowed to purchase a gun. He would have likely already been incarcerated, and he never would have had the opportunity to kill 17 people.

This case isn’t about guns. And the answer isn’t more gun control.

This case is about school districts lying to their families in an effort to get more money and more political influence. It’s about local police forces being willing to ignore crime and refusing to abide by the laws that they promised they would uphold. It’s about government failures at every level and how that corruption and failure led to the death of 17 innocent people.

Don’t let the media sell you some sob story about how we need more gun control in this country. This is all about corrupt politicians and money.

It’s taken a few weeks, but it seems that more members of the national media are beginning to pick up on the real reasons the shooting was able to take place.

If you’re active on social media this month, you may have seen several articles and tweets touting a conspiracy theory related to the February 14 shooting at Marjory Stoneman Douglas High School in Parkland, Florida.

The essence of these claims is that the Broward Sheriff’s Office (BSO), in collaboration with the Broward County School District (BCSD), had ordered their deputies not to arrest juveniles for a variety of crimes in order to artificially reduce their statistics and qualify for lucrative state and federal grants. Both BSO and BCSD are controlled by Democrats, and this policy, the conspiracy believers claim, explains why the dozens of complaints about the Parkland school shooter, Nikolas Cruz, were ignored.

Here’s the wild part: there may be some truth to this conspiracy theory.

Fair disclosure: I initially disregarded the claims because they seemed to lack supporting evidence, except fuzzy PDFs to draft documents with unclear sourcing and links to long narratives on websites often described as “hyper-partisan clickbait” and “extreme conspiracy sites.” When I cite an anonymous source in my articles at RedState or elsewhere you see my byline, I’ve given my editors a heads up and it’s always someone I’ve communicated with directly, not some second- or third-hand hearsay. That did not appear to be the case with these posts.

Government corruption, incompetence, and laziness are quite believable, and there are countless examples to find connected to this school shooting, such as the BSO deputies’ failure to enter the school,Broward Sheriff Scott Israel’s ridiculous attempts to shift blame, and the BSO’s own protocols not requiring deputies to engage an active shooter.

But an active conspiracy to avoid arresting juveniles, even at the expense of public safety? Sounds like it’s time to get out the tin foil hats.

So, the media is finally paying attention? This is a good thing, even if it means they attack sites like ours with their backhanded criticism. They might not like how we present the facts, but our story included links to the appropriate articles, copies of the documents that proved the county was at least considering this policy, and links to sources that corroborated the story. We even independently verified many aspects of the story with local officials, though apparently, while the media loves using anonymous sources to attack the President, they did not like our use of “anonymous” sources to corroborate this story.

Either way, we’re just happy that they’re starting to pay attention. We simply cannot allow the media to ignore the real foundational issues in Broward County that led to the shooting at Douglas.

Earlier this week, Fox News’ Laura Ingraham finally picked up our thread and explained to her viewers how leftwing policies on education and justice, led to the horrible massacre in Parkland, Florida.

What has Ingraham learned about the policies that led to the shooting?

The more we learn about the school shooting in Florida, the more it appears that a Broward County invention may have played a role in what happened. And what am I talking about?

In 2013, Broward County and their new school superintendent, Robert Runcie had a novel idea. Lower school expulsions and arrests by reducing police involvement. Sounds simple. They called it the PROMISE Program — Preventing Recidivism through Opportunities, Mentoring, Intervention, Support, and Education. It’s quite an acronym.

You see, in 2011 into 2012 school year, Broward had the highest public school related arrest record in the state. More than 1,000 kids in that year alone were arrested. The Obama Administration Education Secretary Arne Duncan and Attorney General Eric Holder were so impressed by the PROMISE Plan that it inspired their own new national guidelines…

The Obama bureaucrats incentivized Broward to go even further, awarding the district nearly $54 million in grants to improve the lives of students in poverty and students of color. The standard to show that their lives are actually improving? Fewer arrests at schools, less police involvement, fewer disciplinary problems, at least on paper. So, school administrators were basically paid to deal with student crime in-house and keep the cops off the premises.

Had Nicolas Cruz been arrested or charged by police for bringing knives or bullets to school or for other various infractions, threats and so forth, he might not have been able to buy that gun he used to kill 17 people.

Ingraham also spoke with the Broward County Sheriff’s Union President Jeff Bell who relayed even more frightening information about what is going on in Broward County.

Here’s what Bell told Ingraham: “They don’t want the police officers making arrests on campus and they don’t want the drugs to be found on campus and they don’t want the warrants to be served on campus because it looks like there is bad stats at the school. So, I place a lot of blame on the school board with that and some of the programs that they have initiated with the state attorney and the sheriff’s office in the years past, for example, the PROMISE Program. The problem is, when that program started, we took all discretion away from the law enforcement officers to effect an arrest if we choose to.”

The reality is that the liberals who invented and perpetuated this policy of not arresting criminals when they commit crimes – from the Chicago educators who developed the policies, to the Obama administration for supporting and spreading these ideas, to the Broward County officials who embraced them – are to blame for laying the foundation that made the shooting at Marjory Stoneman Douglas High School possible.

Once again, we are left with the simple truth that the NRA and law-abiding gun owners across the nation had NOTHING to do with this terrible event. It was a violent, criminal madman who committed the heinous act and he was aided and abetted by a system that enabled his ugly behavior to escalate into mass violence.

The real villains, besides Nikolas Cruz, are the Broward County politicians who signed a deal that pardoned criminals before they even committed their crimes, so that the school system wouldn’t look so bad when they were evaluated. And why would they care so much about these evaluations? Because the county leaders knew that better school evaluations would mean more federal dollars pouring in to their schools and local government.

In the end, it’s almost always about the money, isn’t it?