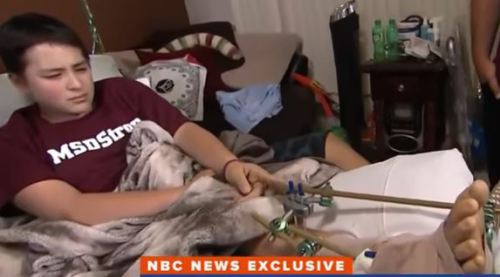 Yesterday, Tony Mead posted on his Facebook page a YouTube video of 15-year-old Kyle Laman, one of the wounded in the February 14 mass shooting incident at Marjory Stoneman Douglas High School in Parkland, Florida.

If you go to the link of Mead’s post, you now get this message:

So what was so offensive about Tony Mead’s post?

This is the NBC Today news video that Mead posted:

As Americans, whose exercise of free speech is guaranteed by the First Amendment to the United States Constitution, we respectfully ask the following four questions about the NBC news video:

In the case of a fractured ankle, New Health Advisor says:

“It is usually very difficult to put weight on your fractured ankle and you should not put any weight on your broken ankle for the first few weeks at least (most commonly 6-8 weeks). Just walk with assistance and shifting weight to the good foot . . . . Some people even feel dizzy or sick mainly due to the pain and shock of breaking their ankle.“

In Kyle Laman’s case, his ankle had just been “torn through” by “a round of AR-15”. How did he manage to not only walk, but “run down three flights of stairs”? He even had the presence of mind to give authorities a “complete description” of the shooter — what the shooter was wearing, and even the type of weapon he was using.

In the NBC Today video, which was published to YouTube on March 2, 2018, just 16 days after Kyle Laman’s ankle had been “torn through” by “a round of AR-15,” his shattered — not fractured — ankle is not in a plaster cast. Instead, in the screenshot below, from the 0:41 mark in the video, Laman’s leg is fitted with what appears to be a metal leg-stabilizer.

(3) The above image is curious for another reason — Laman’s foot doesn’t seem to have toe nails. Why’s that?

I’ve cropped the image and enlarged it:

Is the foot a prosthetic?

(4) Then there is the matter of Laman’s wandering wounded leg.

Here’s a screenshot I took at the 0:12 mark, showing Laman’s wounded leg to be his right leg:

But in the screenshot below, at the 1:56 mark, the curvature of Laman’s body suggests the wounded leg is now his left leg. I had to really slow down the video in order to grab that screenshot because right after the camera shows Laman’s wounded left leg, it quickly cuts away.