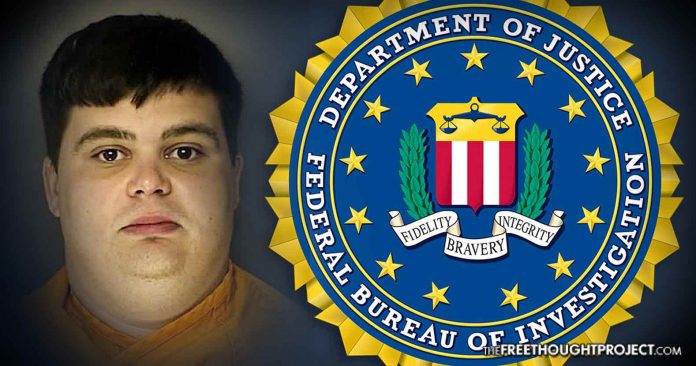 In the days after the school shooting in Parkland, Florida, it became painfully clear that the suspected shooter had given both the FBI and local police a number of warning signs that he planned to carry out the attack, and they did nothing. Now the mainstream media is responding by celebrating a fake terrorist attack that was initiated and then foiled by the FBI.

“White Supremacist Who Dreamed Of Attack In ‘Spirit of Dylann Roof’ Gets Generous Plea Deal,” The Huffington Post reported, noting that Benjamin Thomas Samuel McDowell, 30, will spend anywhere from 10 months to 3 years in prison for planning an attack inspired by the 2015 Charleston shooting.

McDowell apparently attracted the attention of an undercover FBI agent when he made a series of posts in a white supremacist group online. The informant claimed that he fostered a connection with McDowell, who said he wanted to “do something on a fucking big scale.”

“I got the heart to do that shit, but I don’t have the good training,” McDowell reportedly told the informant. “I seen what Dylann Roof did and in my heart I reckon I got a little bit of hatred and I… I want to do that shit. Like, I got desire… not for nobody else… it just… I want something where I can say, ‘I fucking did that’… me personally… If I could do something on a fucking big scale and write on the fucking building or whatever, ‘In the spirit of Dylann Roof.’”

When the informant offered to sell McDowell a firearm for a future attack, and McDowell agreed, the FBI interfered and arrested him. The Post also noted that McDowell is mentally disabled and he has been diagnosed with schizoaffective disorder and bipolar disorder. A previous mental health evaluation determined that McDowell’s “cognitive functioning is very low” and his intellectual ability is “significantly below average.”

The questions remain—would McDowell have actually attempted to purchase a firearm, and if he obtained a firearm from an individual in the group, would he have used it to commit mass murder? Or was he just saying all of the right things and trying to impress an FBI informant who he believed was an influential white supremacist?

While the FBI appears to have intentionally sought out McDowell and used one of their informants to encourage him to carry out an attack, their agents chose to ignore several reports about a suspect who was actually planning an attack.

The FBI received multiple credible reports that Nikolas Cruz was planning to commit mass murder in the months before the Parkland shooting. Less than six weeks before the shooting, someone the FBI described as “a person close to” Cruz reached out to the agency and desperately pleaded for their help. The person reported Cruz’s “gun ownership, desire to kill people, erratic behavior, and disturbing social media posts, as well as the potential of him conducting a school shooting.”

Local police also received at least “20 calls for services in the last few years” regarding Cruz, and police were called to the Cruz family home 39 times in the last seven years over reports of  a “mentally ill person,” “child/elderly abuse,” “domestic disturbance,” and “missing person.”

While the FBI was clearly negligent in its treatment of Cruz, the mainstream media has chosen instead to focus on the fake terrorist attacks the FBI initiates and then stops. A similar instance occurred in December when the media praised the FBI for stopping a man from carrying out an ISIS-inspired attack. In reality, the man was coerced by an FBI informant and when he refused to carry out the attack, he was still painted as a “terrorist,” and he now faces up to 20 years in prison.