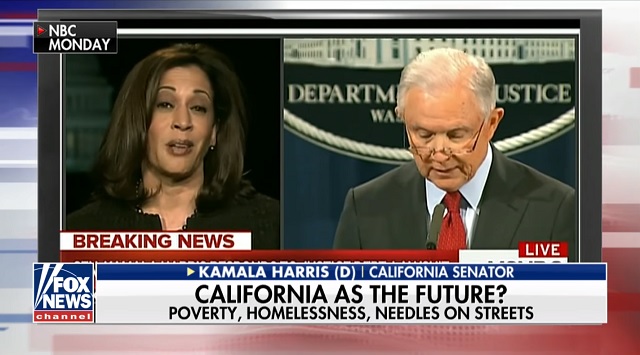 Democratic presidential favorite Senator Kamala Harris said Wednesday on MSNBC that the third world s–thole of California “represents the future” of America and it doesn’t matter if Americans “don’t like it.”

Harris said, “Indeed, indeed he did. Listen, as far as I’m concerned, Jeff Sessions should be advised, and I’ll advise him right now, that it’s a bad idea for him to start talking about anything to do with the history of slavery or Reconstruction or the Civil War in the United States. His credibility is pretty much shot on those issues. But on the topic at hand, Chris, I think Jerry Brown is absolutely right and Jeff Sessions, in particular, has clearly put a target on the back of California, and California’s going to fight. And I think that these folks are really mired in rolling back the clock in time, and that’s not going to happen. California represents the future, and they don’t like it, but there you go.”

She continued, “First of all they’re hypocritical. You can look at members of this administration, whether it is the head EPA—when he was attorney general of Oklahoma said that federal emission standards and other standards as it relates to greenhouse gas emissions should not apply to the states. You can look at this attorney general who has said that imposing the terms of the Voting Rights Act on the states creates an undue burden and is meddling with the affairs of each state. It’s hypocrisy at its height. Again, I think there’s a distraction in that they’re trying to suggest that this is about the Constitution when in fact, what they’re doing is playing politics. They’re playing politics, and they’re playing politics with California. This attorney general is doing that, and he’s going to lose.”

As Tucker Carlson highlights in the clip above, California was ranked dead last for “quality of life” in a recent study from U.S. News and World Report.