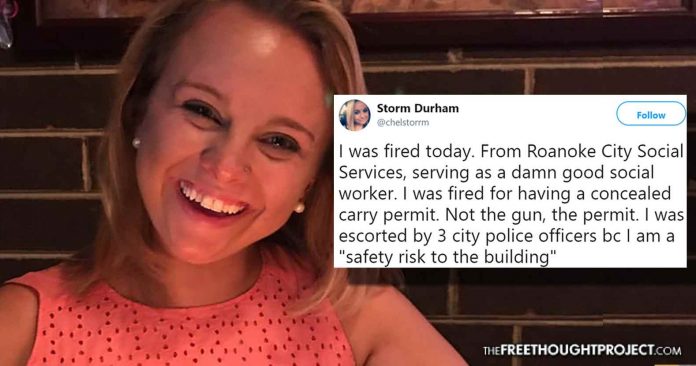 A social worker took to Facebook and Twitter to share that she was fired from her job at Roanoke City Social Services in Virginia and escorted from the building by three police officers—not because she came to work with a gun, but because her employer learned that she had a concealed handgun license.

Storm Durham claimed that she went from working as “a damn good social worker” to being escorted out by police officers who claimed she was a “safety risk to the building.” Her announcement on Twitter received more than 15,000 retweets and more than 20,000 likes:

I was fired today. From Roanoke City Social Services, serving as a damn good social worker. I was fired for having a concealed carry permit. Not the gun, the permit. I was escorted by 3 city police officers bc I am a "safety risk to the building"

Durham posted a longer version on Facebook, in which she wrote that the same department that claims to be devoted to protecting children and families, fired her because they found out that she had applied for a license to protect herself when she was not at work.

“I was fired today due to having a concealed carry permit,” Durham said. “Was my gun on me? No. Has it ever been on me during my job, or visits, or anything related to work? No. When I told them that it has never been on me during work, what did they say? ‘How do we know that.’ Search me.”

Durham described herself as a “22-year-old blonde who is 5’2 and about 140 pounds who loves everything Disney, pink, and basic,” and argued that she is clearly not a threat, and did not pursue a concealed handgun license with the intention of carrying out any illegal acts.

“I was escorted by not one, not two, but three Roanoke City Police Officers to my office where I packed up months of thank you cards, and pictures of kids I’ve helped,” Durham said. “I was escorted by officers who have been with me on visits where I placed a child with a relative due to risks, or when I was hugged by a child because they finally felt safe again. I was told to pack immediately and that I could not even use the bathroom to take a minute for myself because of my ‘serious safety concerns to the building.’”

During a Facebook Live video in response to the incident, Durham reiterated that the officers told her she was being escorted out because she was “a safety risk for the building for having a concealed carry permit.”

She also said she was given a written list of reasons why she was fired, which included her concealed handgun license, a performance requirement she said she corrected, and a complaint that she wore loafers during training.

In a post on Twitter, Durham said she was first called into her boss’s officer two months ago, where she was asked if she “felt safe at home,” because they had learned that there were guns in her home.

I was called in my boss’s office around 2 months ago asking if I felt safe at home and if there is any DV bc it was brought to their attention we have guns in the home. LEGAL GUNS.

While Durham said she does not intend to try to get her job back, she is questioning why the department treated her like a criminal for simply having a concealed handgun license, even though she is a law-abiding citizen.

“I have a concealed carry permit. I own guns. I hunt. I target shoot. I represent women hunters and outdoorswomen,” Durham said. “Does that make me a criminal? Does that make me a safety risk to others? A big enough safety risk to be escorted by three Roanoke City Police officers? So scary and threatening that I need to be treated like a criminal? To be humiliated and looked down upon for owning a gun? For legally having a gun, registering that gun, and having the appropriate documentation for that gun?”

Durham also claimed on Twitter that she never carried her gun on the job, “even though officers told me daily I should be carrying,” given the environment she was working in.

I didn’t even carry on the job or the property even though officers told me daily I should be carrying going into this homes alone.

Durham concluded her post by revealing that she is a survivor of sexual assault, and she obtained her concealed handgun license as a means to legally protect herself. By firing her because of the presence of the license—and not the presence of an actual gun, the City of Roanoke is setting a dangerous precedent that could lead to the termination of any employees who have obtained licenses outside of work that the department claims may present a “safety risk.”

“The Constitution of the United States of America. The one document that has followed us for years, and will continue to be the power resource of all we do as Americans. The second amendment: the right to bear arms. The Roanoke City Department of Social Services should be ashamed of themselves. They should be publically known that they did this,” Durham said.