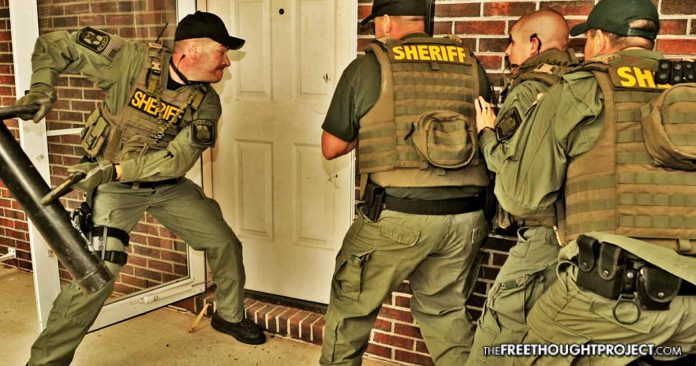 Illinois — The Illinois House has passed a bill that will require legal gun owners to hand over ownership of heretofore legally possessed guns. Now, this most tyrannical bill has moved to the Senate and is one step away from becoming law.

The bill, HB 1465 was sponsored in the House by Rep. Michelle Mussman (D-Schaumburg) and passed with a vote of 64-51 last month.

The legislation would prohibit anyone under 21-years-old from buying or possessing commonly-owned semi-automatic rifles, high-capacity weapons that can hold more than ten rounds, their subsequent attachments, and .50-caliber rifles and cartridges. They would have 90 days to turn in their guns to the government or become criminals.

Naturally, those opposed to the bill have been outspoken pointing out the tyranny of the government stealing once-legally owned property from individuals based on the arbitrary number of birthdays they’ve had.

Mussman claims that the bill won’t have cops going door to door to confiscate weapons—yet—but it will make keeping your once-legal gun a crime.

Rest assured that this is the exact same model that Donald Trump is pushing for on the federal level as he has already been outspoken about taking guns from 18-20-year-old adults.

Earlier this month, President Donald Trump betrayed his base and Americans in general as he advocated for confiscating guns with no due process.

This blatant attack on the very thing that makes America great, due process, has been in the making since before the Florida shooting, but Trump appears to be striking while the iron is hot. And his supporters couldn’t care less.

Earlier this month, president Trump told a group of lawmakers that they must do something to keep guns away from mentally ill individuals – even if that means raising the minimum age for rifle ownership to 21 and making all 18-20 year-olds who have guns, criminals overnight. He is also going after gun parts as well.

His attack on the Constitution has gotten him praise by the left and is met with silence by his supporters who are conducting mental gymnastics to praise this man who is calling for the removal of due process and the removal of their right to self-defense.

While the current legislation in Illinois claims to only go after semi-automatic rifles, the wording of the bill also makes it possible to go after handguns too if they decide to interpret the definition in a certain way.

As the bill states, it will ban any weapon with “a shroud that is attached to, or partially
or completely encircles the barrel.” This could technically be applied to most modern handguns.

Indeed, the now-expired Federal Assault Weapons Ban included a barrel shroud in its list of features for which a semi-automatic pistol could be banned (two features in the list were required), the logic being that a barrel shroud would be cool enough for a shooter to grip and better control their firearm.

It seems that the hollow claim by government that “nobody wants to confiscate your guns” is nothing more than a pack of lies used to calm those who aren’t paying attention.

Make no mistake, even if this bill does not affect you directly, it is just the beginning. Government works in increments to erode everyone’s rights but slowly enough so people can continue to think “it won’t affect me.” Remember this warning for the future as more and more people are stripped of their right to defend themselves—first, they came for the under 21-year-olds.