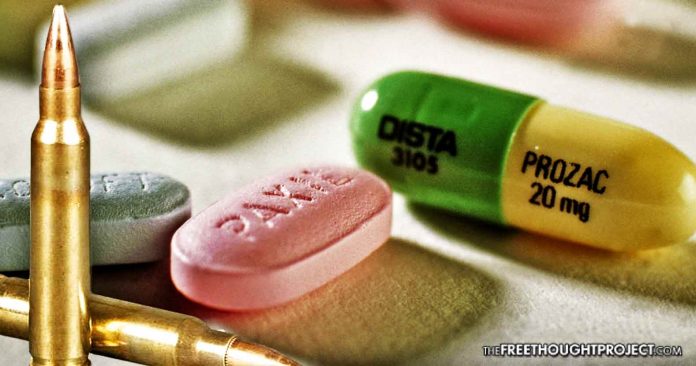 Every time there are reports of a mass shooting, there are a number of people who automatically question whether the suspect had mental health issues or was taking prescription medications such as antidepressants.

While history has shown that the most notorious mass shooters in this century were taking antidepressants or Selective Serotonin Reuptake Inhibitors (SSRIs) before they carried out the deadly rampages, there are a number of killings that have been linked directly to the dangerous drugs. In fact, the pharmaceutical companies behind the most popular SSRI’s have paid hundreds of millions of dollars in damages:

Joseph T. Wesbecker, 47, carried out a mass shooting in which he shot 20 workers at Standard Gravure Corp. in Kentucky, in September 1989. Eight of the victims were fatally wounded, and Wesbecker ended the rampage by shooting and killing himself.

Just one month earlier, Wesbecker had started taking the antidepressant Prozac, which included side effects such as “obsession with suicide and dangerously violent behavior,” according to an article in the American Journal of Psychiatry.

When the survivors of the shooting filed a lawsuit against Eli Lilly arguing that it had known about the propensity of Prozac to cause violent outbursts and suicidal tendencies, the company convinced the victims to agree to secret settlements outside of court.

GlaxoSmithKline Paid $6.4 Million to the Family of a Man Who Murdered Three Family Members Hours After Taking Paxil in 1998

Donald Schell, 60, was prescribed the antidepressant Paxil to treat depression in Wyoming in February 1998. Within hours of taking the first dosage, he burst into a fit of rage and fatally shot his wife, Rita; their daughter, Deborah Tobin; and their 9-month-old granddaughter, Alyssa.

Schell then shot and killed himself. His remaining family members filed a wrongful death lawsuit against the pharmaceutical company behind Paxil, and they were awarded $6.4 million based on “the company’s failure to sufficiently warn doctors and patients that the effects of the drug could include agitation and violence.”

Stewart Dolin, 57, was working as a corporate attorney in Illinois when he was prescribed the generic version of the antidepressant Paxil for depression and anxiety. While taking the drug, he committed suicide by jumping in front of a Chicago Transit Authority train.

His widow, Wendy Dolin, filed a lawsuit against GlaxoSmithKline, arguing that the company failed to warn her husband’s doctor that the drug he was being prescribed would increase his risk of suicidal behavior, which led to his death.

“This for me has not just been about the money. This has always been about awareness to a health issue, and the public has to be aware of this,” Wendy Dolin told the Chicago Tribune after she was awarded $3 million in compensation.

While the cases mentioned above are notable because they received significant media attention, there is still an overwhelming number of lawsuits that stemmed from cases in which pharmaceutical companies paid millions of dollars for failing to warn doctors that the antidepressants they were prescribing could drive patients to kill themselves and others.

According to reports, the first lawsuit involving a Paxil suicide case went to trial in 2001, and since then, GlaxoSmithKline has paid more than $390 million in settlements or verdicts for Paxil-related cases. If that is the price they are willing to pay, then the profit they are making off of the controversial drug must be incredible.