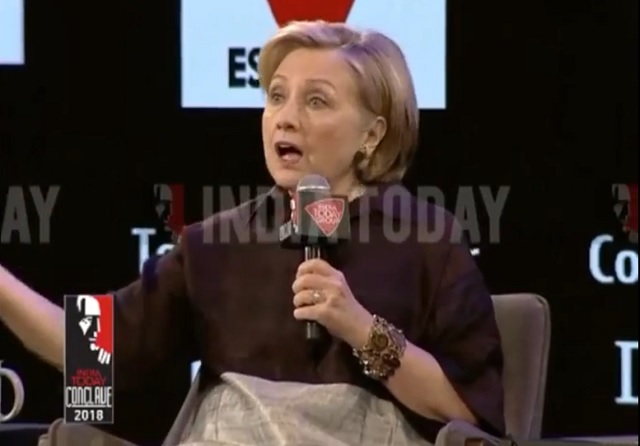 Failed presidential candidate Hillary Clinton said Sunday at the India Today Conclave that the reason she lost the white female vote and in turn the election was because Trump voters “didn’t like black people getting rights” and “don’t like women getting jobs.”

“If you look at the map of the United States, there’s all that red in the middle where Trump won. I win the coasts, I win Illinois, I win Minnesota, places like that,” Clinton said.

“What the map doesn’t show you is that I won the places that represent two-thirds of America’s gross domestic product,” Clinton explained. “So I won the places that are optimistic, diverse, dynamic, moving forward. And his whole campaign, ‘Make America Great Again,’ was looking backwards.”

“You know, you didn’t like black people getting rights. You don’t like women, you know, getting jobs. You don’t want to see that Indian-American succeeding more than you are. Whatever your problem is, I’m going to solve it,” Clinton said, about people who supported Trump.

Imagine if this was our president.