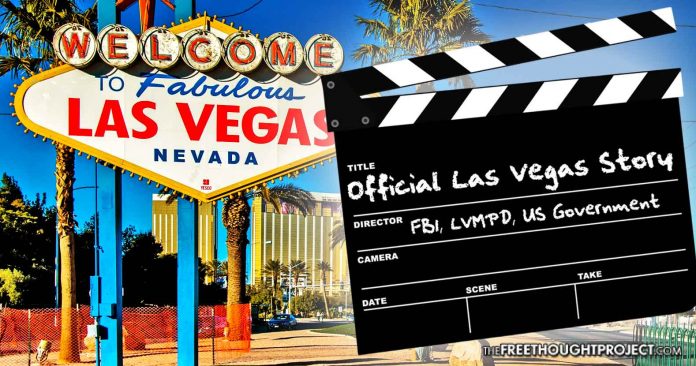 Damning information has allegedly been reported by FBI insiders who claim that the “official” narrative about the deadliest mass shooting in modern US history is a fiction, perpetuated by law enforcement to keep Americans ignorant as to what really happened in Vegas.

The report comes from True Pundit who claims to have been contacted by several FBI insiders and high-ranking intelligence officials who are making the bombshell claims.

“It’s a movie script that was written after the shooting to rewrite what really happened,” one FBI agent said, according to the media outlet. “The investigation is an entirely different story that we are not allowed to talk about. If we do and get caught, we get fired and probably charged (criminally).”

According to the report, the entire premise of the shooting—as in Stephen Paddock acted alone—is completely false.

As True Pundit reports, after months of corporate-infused spin by MGM Resorts and outright lies from officials in the FBI and the Las Vegas Metro Police Department, federal agents and intelligence officials are spilling the beans about what really happened on and before the Oct. 1 massacre.

According to the FBI officials, as reported by True Pundit, the following jaw-dropping cover-ups:

While some of these points attempt to paint a partisan motive for this attack, it is important to remember that all sides would love to use Paddock to “blame the other guy” and this should not lead to the creation and hatred of stereotypes nor should it be used to divide Americans. If it turns out that Paddock was indeed anti-Trump, then this should not be used to demonize others who are also opposed to Trump.

Anything outside of a thorough investigation to seek the truth is an insult to the victims and their families. Those who would attempt to use this tragedy for personal or political gain are no better than those trying to cover up the truth.

According to True Pundit, Monday’s report is one of many they will be releasing that will contain all the information given to them by their FBI and intelligence sources.

As we’ve done throughout this campaign of misinformation and lies that is the Vegas Massacre, the Free Thought Project will continue to sift through all the evidence to find the truth.