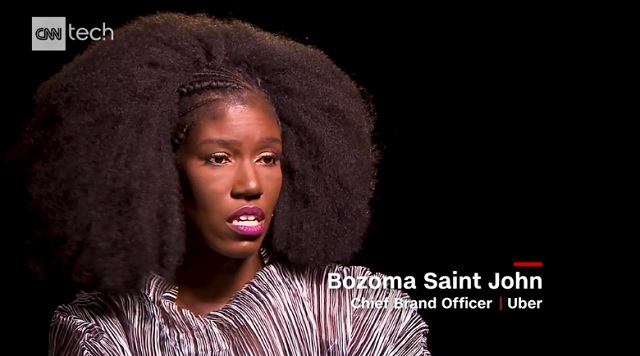 Uber’s chief brand officer Bozoma Saint John told CNN on Sunday that she wants white men to recognize that a bunch of white guys working together in an office is a problem which they need to fix.

"I want white men to look around in their office and say, 'Oh look, there's a lot of white men here. Let's change this.'"

“I want white men to look around in their office and say, ‘Oh look, there’s a lot of white men here. Let’s change this,'” Saint John said at the SXSW festival on Sunday.

Saint John said the onus should not be on people of color to improve diversity at work: “Why do I — as the black woman — have to fix that? There’s 50 of you, there’s one of me. Ya’ll fix it. … Everybody else needs to make the noise — I want white men to make the noise.”

Also, as men, aren’t they not supposed to treat women as “damsels in distress” needing to be saved?

Nah. This is simply racist. If they are better workers, sure hire them but NOT because of skin color

The retardation of America continues

That is the stupidest thing I’ve ever heard

How about white men look around and assess whether Merit was used for hiring and promotions!?