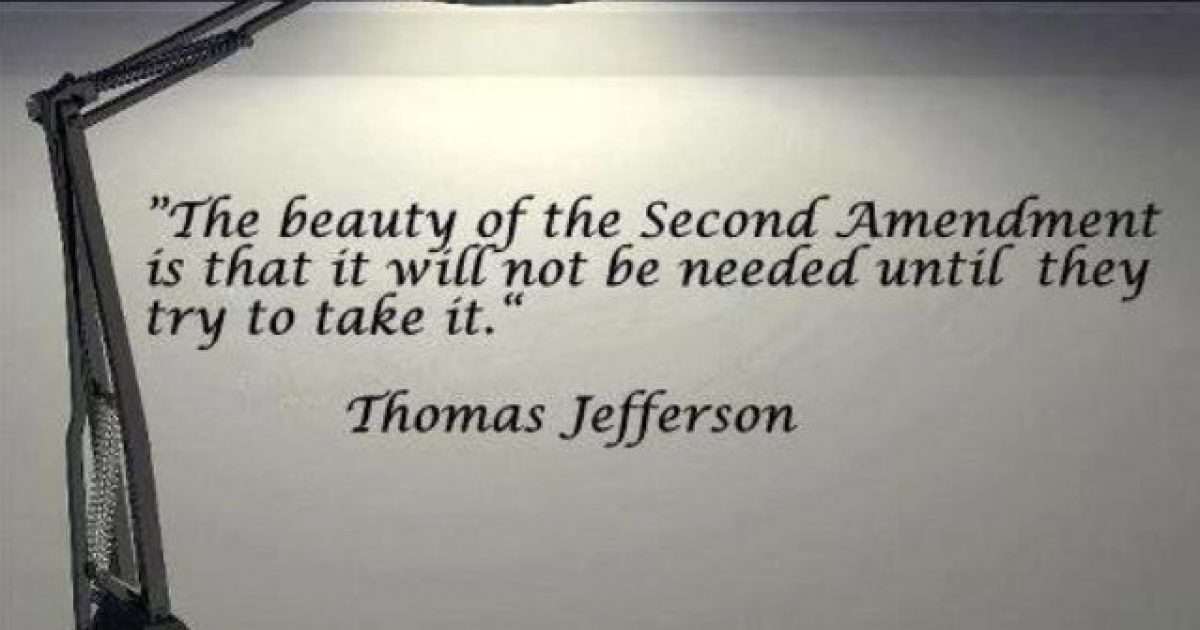 “A well-regulated Militia, being necessary to the security of a free state, the right of the people to keep and bear arms, shall not be infringed,”The Constitution for the united States of America, Second Amendment, ratified 12/15/1791.

It is almost incomprehensible that this one God-given individual unalienable right, recognized and protected by the Second Amendment, should come under such intense fire by both constitutionalists and anti-constitutionalists alike when history has shown that an unarmed populace is doomed to be controlled and often killed by the very people who declare, “there is no need for the people to be armed,” meaning the government.

Regardless of any argument made, backed with historical fact and reinforced with truth, many people of this republic, whose ancestors won freedom against tyranny through the use of arms, continue to fall prey to manipulation of emotion by individuals who know, or pretend to know, very little about arms or manipulation through interpretation of a clear, concise inherent right that maintains the freedom for everyone against despotism and tyranny.

By now, it’s quite obvious that no one actually knows where President Trump stands regarding the right of the people to keep and bear arms.  One moment he states, “Take the guns first, go through due process second.”  The next, a tweet from NRA-ILA executive director Chris Cox indicates Trump and Pence support the Second Amendment, the right of the people to keep and bear arms.  With Congress continuing to contemplate a “bipartisan” bill aimed at increasing the gun control laws on the books and States rushing to pass unconstitutional gun control laws, even at the State level, one can deduce that Trump and Pence stand in unison with violating the God-given individual unalienable rights of the people in contrast to the campaign platform of supporting that right through upholding the Second Amendment.

With the States rushing to enact unconstitutional gun control legislation, many people, constitutionalists and anti-constitutionalists alike, contend that States have “more leeway” to infringe upon the rights of the people than the federal government, pointing to the State constitutions as the basis for this stance.  However, no one ever asked if that is true or not.  With the Founding Fathers identification of “natural rights” through the “Laws of Nature and of Nature’s God” and men “being endowed by their Creator with certain unalienable rights,” would these men, who fought against government tyranny and despotism award any government, created by man, at the local, State or federal level, the authority to infringe upon any of those natural rights they held so dear?

Where would one go to find such an answer?  In studying the Constitution for the united States of America and all of its amendments, the answer should be clear.  In the first ten amendments, known as the Bill of Rights, it is clear these iteration of universal, natural rights endowed upon men by their Creator (God) precedes any government;  therefore, no government has the authority to usurp or limit those rights, except where indicated.  The First Amendment declares, “Congress shall make no law ….”, but, we know States are permitted to enact laws against libel, slander, defamation of character and speech such as yelling “fire” in a crowded theater.  Second, the Tenth Amendment declares, “the powers not delegated to the united States by the Constitution, nor prohibited by it to the States, are reserved to the States respectively, or to the people.”   The powers of the united States government are contained in Article I, beginning with Section 8, which are the authorized duty of Congress, not the States.  Article IV of the Constitution for the united States of America further covers what the States are required to do in regards to each other and exerts power of entry of States to the union to Congress and prevents the formation of new States by forming a “state within a state(s)” unless approved by the affected State legislatures.  It also outlines the responsibility of Congress regarding the States.

So, again, why would the Founding Fathers allow States, another form of government, to infringe upon the universal, natural, God-given unalienable rights of individuals?  These men lived under a despotic government tyranny inflicted by King George, which is akin to a national government tyranny.  However, these same men suffered under despotic “State” governments through the King’s appointed governors as well.  Some governors were worse than others, but all infringed upon the rights of the people in some way.  It would negate all the founders fought against to allow States to infringe in any way upon those universal inherent rights.

If the argument is the “States have more leeway to infringe upon the rights of the people” when it comes to the Second Amendment, one would have to contend that States can violate the inherent rights of the people recognized and protected by the Fourth Amendment, the Fifth Amendment, and all others contained in the Bill of Rights.  Remember, the enumerated rights in the Bill of Rights does not disparage or deny any others retained by the people, i.e. the right to privacy.  If the argument holds true that States do have the right to infringe upon God-given individual unalienable rights, then would it not hold true that States are the arbiter of rights, not God?  Accepting this argument would negate the entire first two paragraphs of the Declaration of Independence that recognized universal inherent natural rights, as the Progressives did beginning with Theodore Roosevelt, off limits to any and all governments to then place it in the hands of government, i.e. the State governments.

Those using the “States have more leeway argument,” because the particular State constitution allows an “out,” so to speak, to infringe upon the rights of the people to keep and bear arms, the State constitution in question is in violation of the self-evident truths the founders fought to preserve.  For, the purpose of government is to protect the rights of the people.  The people should rally to change those State constitutions, not support continued infringement of the people’s rights.  Those that support the States’ having “more leeway” to justify passage of legislation infringing upon the rights of the people to keep and bear arms at the State level have to contend that bypassing of the Fourth Amendment to conduct “no-knock, warrantless” raids against the people are justified under the same premise.  If one God-given individual unalienable right is at the discretion of the States, then all God-given individual unalienable rights are also at the States’ discretion.

The people have been conditioned to equate technological progress with societal progress to justify expansive government that requires people relinquish their natural inherent rights, espoused by the founders, to that government for preposterous and outrageous reasons.  The condition of man has not changed, meaning the men comprising society has not changed.  Men are still capable of terrible evils, as we see through the various crimes continuing to be committed despite laws against those crimes.  And, when groups of evil men band together, these evil men perpetrate evils upon the people – some with impunity, meaning the government does not protect the people from those evils.  Are the people so willing to entrust their safety to a government that is inconsistent on punishing criminals and inconsistent in protecting the people?

The federal government fails to repel invasions of illegal alien invaders, many foreign Islamic jihadis, into the united States along both the southern and northern borders.

The federal government allows the operation of some 33 Islamic jihadi training camps all across the united States where these “trainees” have fully automatic weapons and use incendiary devices.

State and local governments legislate to become sanctuary States and cities allowing illegal alien invader criminals to have impunity from their crimes in defiance of the federal government.

State governments have determined the age upon which a young girl can murder her own baby without parental consent or approval.

State governments have determined the age when a young girl can access contraception, age 12 in some states, without parental knowledge or consent.

The federal government continually violates the Fourth Amendment by hoovering every communication and internet activity made by US citizens without probable cause or warrant.

The federal government again violates the Fourth Amendment by requiring all US citizens traveling by air submit to illegal searches.

The federal government allows politicians and those in government to violate federal law with impunity while holding citizens accountable under the same law.

The federal government denies US citizens travel by airplane if one’s name appears on the “no-fly” list without any due process to challenge their name being placed on the list or advocating for their name to be removed from the list.

Both the federal and State governments engage in civil asset forfeiture without the allowance of due process.

Both the federal and State governments allow women to murder babies in the womb with impunity while infanticide is a crime.

The list could on to cover more, including growing your own food on your own property, making improvements to one’s property, participating in farming co-ops, criminalizing plants that have medicinal value in favor of Big Pharma, and so on.

Are we, as a people supposedly living in a free republic, comfortable with government – local, State or federal – infringing upon God-given individual unalienable rights under preposterous, outrageous and erroneous reasons?  In the past, it appears that many were and still are.  However, now that the very God-given individual unalienable right to keep and bear arms in order to maintain a free state is beginning to be infringed, starting with the young, it is time for many to rethink that position.  Today, the target is 18 to 20-year-olds.  Tomorrow, the target may be older citizens.  A little later maybe households with 18 to 20-year-olds who could access firearms of parents.  Then, households where children are caring for elderly parents could be targeted. Then so on and so forth until government, State or federal, has succeeded in ripping the right to keep and bear arms from law-abiding citizens, while criminals still have weapons, jihadi training camps are unfazed, government officials maintain their armed security, and law enforcement and the military have firearms.

When that happens, government can force individuals to do anything because all laws made in contradiction to natural law and God-given individual unalienable rights are enforced at the barrel of a gun.