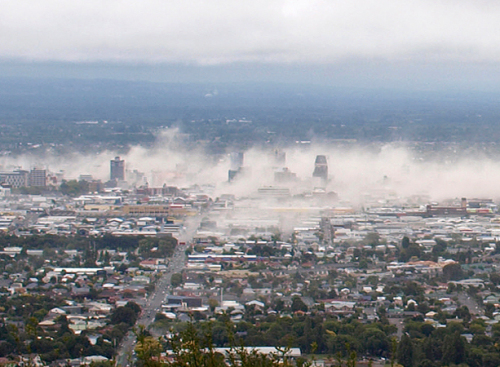 “There are no accidents in politics.” — Joseph P. Kennedy‘s remark to a reporter, 1960.

The earthquake was New Zealand’s 5th deadliest disaster, killing 185 people and caused widespread damage. In April 2013, the government estimated the total cost of the rebuild would be as much as $40 billion, up from an earlier estimate of $30 billion. Some economists maintain it will take the New Zealand economy 50 to 100 years to completely recover.

In a post on TheContrail, Peter Drew raises the troubling notion that the Obama administration had foreknowledge of the earthquake, based on the following:

(1) Email to then-Secretary of State Hillary Clinton called the earthquake “on cue”:

On February 21, 2018, at 7:32 p.m. ET, 41 minutes after the earthquake struck Christchurch, Jake Sullivan, Hillary’s Deputy Chief of Staff and Director of Policy Planning at the State Department, received an email alert from the State Department’s Operations Center:

There was no immediate confirmation of injuries or damage to the city from the quake, according to press.

Three minutes after his receipt of the OpsAlert about the earthquake, Sullivan forwarded the email to Hillary Clinton (“H”) and other members of her staff, with a three-word comment, “And on cue”:

Here’s the screenshot of Sullivan’s email from WikiLeaks:

The dictionary defines “on cue” as:

If you say that something happened on cue or as if on cue, you mean that it happened just when it was expected to happen, or just at the right time.

(2) U.S. delegates to a US-New Zealand forum fortuitously left 2.5 hours before the earthquake:

The day of the earthquake was the last day of the 2-day US-New Zealand Pacific Partnership Forum (February 21-22) of 200 officials from the U.S. and New Zealand at the AMI Stadium in Christchurch.

Although the forum was supposed to last all day, as reported by NPR, “A group of nine U.S. Congressmen had left the city before the earthquake struck” and relocated to Prime Minister John Key’s office in Wellington.

On February 24, 2011, two days after the earthquake, Northland New Zealand Chemtrails Watch posted a video on the early departure of the nine U.S. Congressmen 2½ hours before the earthquake struck. That video has been taken down by YouTube.

Then-Secretary of Homeland Security Janet Napolitano had been invited to address the US-New Zealand Pacific Partnership Forum on February 22.

Four days before her speech, on February 18, Napolitano canceled her visit, using the fatal shooting of a US immigration and customs enforcement agent in Mexico as an excuse.

(4) Coincidentally, the deputy director of FEMA was in Christchurch when the earthquake struck:

The White House is deploying a team of disaster-response and urban-search-and-rescue teams to New Zealand in response to the 6.3-magnitude earthquake that rocked the country Tuesday.

They will be greeted there by FEMA Deputy Administrator Timothy W. Manning, who is already in the country assisting with response efforts and is uniquely qualified to do so.