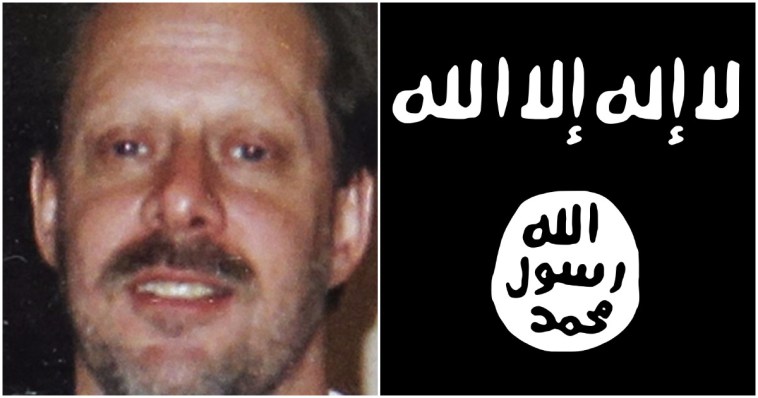 The shooting at the Mandalay Bay Casino in Las Vegas took 58 lives, and months later the FBI still has told us nothing about why it happened.

This monstrous slaughter took place last October, and still the FBI has nothing and has said nothing about the killer Stephen Paddock’s motive.

Yet, they have dismissed ISIS claims out of hand, despite the fact ISIS does not take credit for attacks that are not theirs.

Not only did they take credit, they did something they never did before – they doubled and tripled down. The Islamic State (IS) featured an infographic on the Las Vegas attack in the 100th issue of its al-Naba weekly newspaper, and indicated that the shooter, whom they called “Abu Abdul Barr al-Amriki,” had converted to Islam six months ago.

Jihad is the only motive that makes any sense. And the fact that the FBI has nothing and is engaged in a massive coverup points to that.

That Stephen Paddock left no digital trail might very well be deliberate – to show how incompetent our law enforcement agencies are.

ISIS took credit for the downing of the Russian jetliner in the Sinai. Everyone in law enforcement dismissed that too. Until ISIS provided proof a couple of weeks later, that is. I suspect we may see the same thing happen here. The Vegas attack mirrors the sophisticated planning and secrecy consistent with more complex ISIS plots such as the Sinai explosion of Russian airliner.

We have been told that because Paddock was white and 64, it is unlikely that he would be a convert to Islam.

Islam is ideological — it’s not a race or an age. It’s a belief system. It’s also being said that if Paddock was a convert, Homeland Security is going to have to change their whole approach to jihad terror in the Homeland.

We can only hope. Because this war has nothing to do with age, race or gender — it’s religious. And profiling is required. On the top of my watch list would be converts.

Who would be attracted to an ideology that is the cause of hatred, misogyny, subjugation and slaughter?

If you don’t believe that the FBI is capable of this level of corruption and dishonesty, just consider the fact that an undercover agent told one of the jihadis who attacked my free speech event in Garland, Texas to “tear up Texas,” and yet now claims that he didn’t know he was actually going to do it.

This is not an FBI of patriots. This is Obama’s FBI.

The “official” narrative you’ve been fed by the FBI and Las Vegas officials about the massacre at Mandalay Bay that claimed 58 lives is purely fiction, a polished story contrived to cover up the disturbing facts surrounding the worst mass shooting ever in the United States, according the FBI insiders and high-ranking intelligence officials.

And now, after months of corporate-infused spin by MGM Resorts and outright lies from officials in the FBI and the Las Vegas Metro Police Department, federal agents and intelligence officials are spilling the beans about what really happened on and before the Oct. 1 massacre.

“It’s a movie script that was written after the shooting to rewrite what really happened,” one FBI agent said. “The investigation is an entirely different story that we are not allowed to talk about. If we do and get caught, we get fired and probably charged (criminally).”

But why the cover up?

The answer to that is perhaps even more complicated than the revelations surrounding the shooting, which can only be explained as shocking and troubling to everyday Americans not connected to the law enforcement community and political machine that has become today’s FBI. While few if any bright Americans believed the official back story of the supposed Stephen Paddock rampage, the truth — it turns out — is even more bizarre than fiction here.

The FBI maintains that Stephen Paddock — the reported lone gunman — was a mystery man and his motive for killing dozens and injuring over 500 people still has not been pinpointed. Those assertions are simply untrue, FBI officials confirm. Lies. In the coming weeks, True Pundit will detail various parts of its investigation into the shooting and more importantly, paint a detailed portrait of the events leading to the shooting and Paddock’s likely accomplices and associates.

The major, shocking revelations include:

When FBI brass was provided with forensic evidence of multiple gunmen, they told agents to stand down and focus on Paddock only. Even a key internal audio captured by a hotel guest of multiple rifles firing from Mandalay Bay went ignored, covered up.

When FBI brass was provided the names of persons of interest who likely assisted Paddock, agents were instructed not to interview the individuals. One would-be target was never pursued despite pleadings from intelligence officials and agents that he was possibly the second shooter.

The FBI uncovered specific evidence showing that Paddock was anti-Trump and had an affiliation with ANTIFA, though it never was divulged to the public and agents did not follow such leads, per orders of their superiors.

When FBI brass was given evidence that the shooting was possibly linked to ANTIFA radicals working with an ISIS-linked terror faction — including the full identities of some of the suspects with ties to both radical groups and at or near Mandalay Bay the night of the deadly shooting — agents were never instructed to follow up on the investigation and pursue the suspects.

When intelligence officials approached the FBI and LVMPD with external evidence that Paddock was only one member of an organized terror cell — which included as many as five gunman who planned to fire from the Mandalay Bay suite — the compelling evidence was covered up. Never pursued.

When FBI brass was provided with forensic evidence that Paddock’s death was not a suicide, the intelligence was never pursued by the FBI and LVMPD. FBI sources said Paddock suffered two gunshots. His autopsy report only details a single bullet to the head. FBI sources maintain Paddock’s autopsy was doctored and is a fraud.

When an ISIS-linked “businessman” from Turkey was pinpointed in the investigation — and found to be residing near Las Vegas at the time of the shooting — FBI agents were not instructed to follow up and pursue intelligence leads showing possible links to the massacre.

FBI and intelligence officials believe Paddock and associates chose to strike the Las Vegas country music concert with over 22,000 people because they likely supported President Trump. FBI agents said they were instructed to keep that key motive quiet too.

When FBI agents and agents from the Bureau of Alcohol, Tobacco, Firearms and Explosives informed FBI bosses that Paddock didn’t start buying dozens of guns until after Trump’s election, they were told to keep that fact quiet and shrouded.

When FBI agents followed up on an ABC News report that Paddock wired $100,000 to the Philippines shortly before the rampage they confirmed the report was untrue. Instead of disputing it, FBI bosses embraced the false story, saying it helped build the narrative the Bureau was constructing about Paddock. FBI agents believe the story was planted with ABC by their superiors.

d there is much much more that is not detailed here today. This is only a summary of True Pundit’s investigation.

This FBI-generated smoke screen has occurred during the watch of FBI Director Christopher Wray and his Las Vegas Field Office Special Agent in Charge Aaron Rouse, a disciple of Andrew McCabe, the defrocked and disgraced former deputy director of the FBI. It has unfolded during President Donald Trump’s first year in office. Does Wray even know about what amounts to a conspiracy led by the FBI to cover up a mass killing of U.S. citizens? Whether he does or does not seems to matter little. This is no longer his problem to fix. Trump and others must investigate and provide honest answers. The FBI can no longer be trusted to do so. On any level. Especially in Las Vegas. It is difficult to imagine that any competent director of the FBI would not know about this. Unless he was lied to by FBI brass….