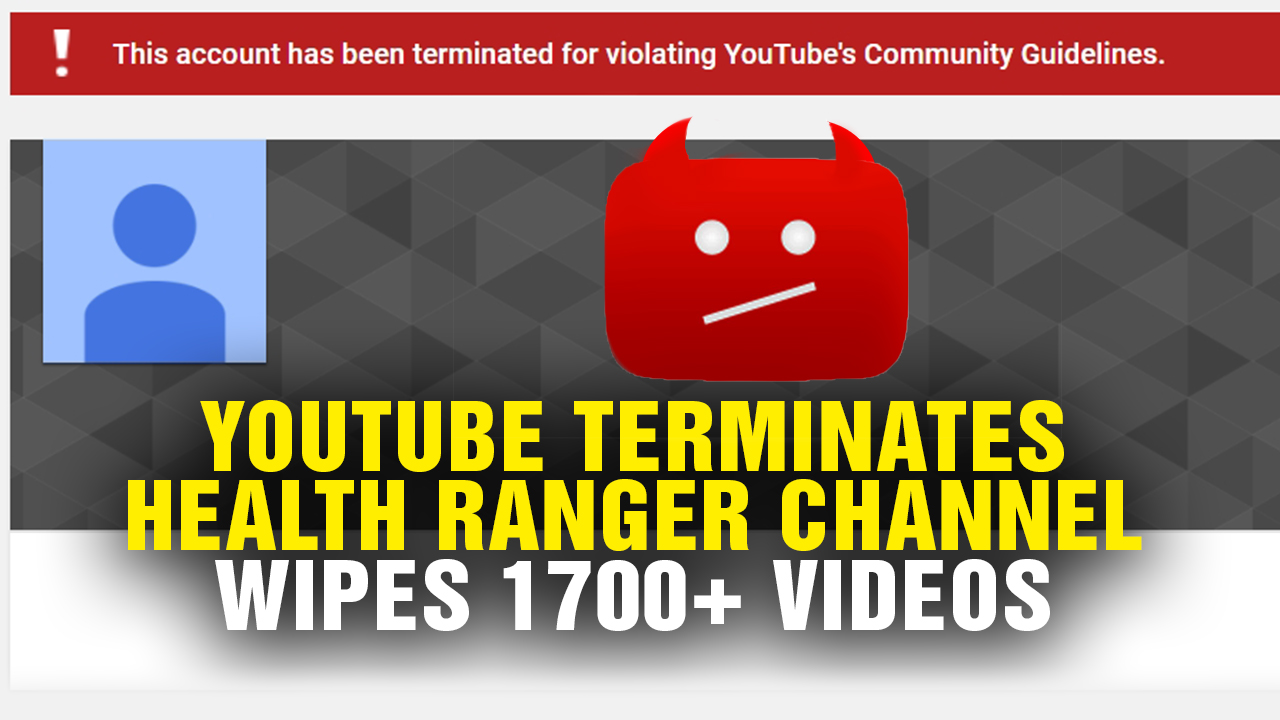 (Natural News) In the most egregious demonstration yet of outright tyranny and oppression of free speech, YouTube terminated the entire Health Ranger channel(“TheHealthRanger”) without explanation over a week ago. Since then, the internet has expressed increasing outrage toward YouTube for blatant censorship of a channel with over 350,000 subscribers, 1700+ videos and over a decade of video content covering natural medicine, home gardening, laboratory science and liberty podcasts.

The blatant censorship purge being carried out by tech gatekeepers like Google, YouTube and Facebook can only be called “techno-fascism,” and it’s rooted in radical left-wing ideology that has disturbingly morphed into an intolerance cult of totalitarian nut jobs. These people believe that censoring all political opponents is a “victory” for their twisted ideology, and they have now weaponized their power to censor into a campaign of oppression that’s so dangerous, even the creator of the World Wide Web is now calling for the tech giants to be urgently regulated to protect free speech.

“What was once a rich selection of blogs and websites has been compressed under the powerful weight of a few dominant platforms,” warned Tim Berners-Lee in this Web Foundation post. “This concentration of power creates a new set of gatekeepers, allowing a handful of platforms to control which ideas and opinions are seen and shared.”

“What’s more, the fact that power is concentrated among so few companies has made it possible to weaponise the web at scale,” Lee added. He’s referring to the tendency for concentrated power to be exploited and abused by those who wield it. Today, Google, YouTube, Facebook and Twitter pose a very real danger to democracy and freedom, and they are selectively targeting independent media voices for termination or suppression.

Watch Ben Swann explain it, if they don’t ban his video by the time you read this:

Today, my legal team has issued a demand letter to YouTube, seeking justification for why the channel was banned and demanding the channel be restored. When YouTube terminates your channel and memory holes all your videos, they provide no evidence whatsoever to justify their decision. They don’t name a video that was in violation, and they have no process for appealing the decision or defending yourself against false accusations.

YouTube’s censorship process is the very definition of techno-tyranny: You’re deemed guilty merely by being accused, even without a shred of actual evidence against you. That’s why we’ve demanded that YouTube present evidence of a violation of their community guidelines. Because, truth be told, no such evidence exists. YouTube fakedthe “violations” accusation in order to terminate my video channel for political reasons alone.

This is exactly what Google did over a year ago to blacklist the NaturalNews.com domainfrom the Google index for six days. They fabricated a completely fake technical reason, then deleted the entire Natural News website. Six days later, the site was turned back on, without explanation. Never in this entire process did Google provide a single shred of evidence of any technical violation having occurred. In fact, thousands of webmasters reviewed the Natural News website during that dust-up, and there wasn’t a single webmaster who could locate any technical violation that would have justified Google’s blatant censorship of the NaturalNews.com domain.

That’s why it’s no surprise that YouTube — owned by Google — pulled the same shenanigans a week ago, terminating The Health Ranger channel utterly without justification or rational explanation. A close review of Health Ranger content — now available at this Vimeo channel — reveals no violation whatsoever of legitimate community guidelines. My videos contained near-zero profanity, for example, and criticism against individuals was focused on public figures such as Al Gore, Joe Biden, Jimmy Kimmel or Hillary Clinton.

Health Ranger channel banned for claiming “there are only two genders?”

In the last few days, I was told by an individual who claimed to be a YouTube insider that my channel was terminated because I claimed there were only two genders.

It wasn’t the politics or liberty-oriented content that resulted in a termination, I was told: It was my unwillingness to bow down and lick the boots of the LGBT mafia, which has increasingly become a totalitarian mob of thought police and victimology experts who are now trying to memory hole genetic science and biological reality.

Any person who claims that children are born as either male or female — rather than the “undecided” status the LGBT cultists demand — is deemed an intolerant bigot. Yes, merely quoting biological reality is now enough to make you an enemy of the deranged, lunatic Left (which now saturates the twisted culture of YouTube and Google).

To fully grasp the insanity of the LGBT mafia’s demands for irrational conformity, imagine if there were a group of “anti-gravity” cultists who targeted you to be silenced if you dared mention that you believe in gravity. The sheer delusion of the LGBT nut jobs and their make believe “infinite genders” quackery is laughable to any legitimate scientist or biologist, yet these delusions have now become required “confessions” in order to maintain your right to speak online. In other words, to have any voice at all on YouTube, Facebook, Google or Twitter, you are now required to state outrageously false things, like believing that XX / XY chromosomes don’t control gender expression, or that human babies are born “gender-less,” requiring their gender to be arbitrarily “assigned” after they are born. (Yes, this lunacy is literally what the Left now believes… it’s beyond crazy…)

These ideas are sheer lunacy. They are blatantly, obviously false and self-contradictory. But they are pushed in such dangerous fashion that failing to publicly embrace these delusions can get you fired from your job, denied entrance into a college or censored on YouTube.

The Left has devolved into a cult of deranged lunatics who demand you “confess” to insane, false beliefs

This is what the Left has come to: A delusional, tyrannical cult of lunatics who invent new delusions each week while requiring you to progressively accept and profess your conformity to each one, even as they become increasingly bizarre. This week, you’re told that human babies are born as gender-less beings… next week, you’ll be told that all white people must be executed for “social justice” (or that all cops are evil and should be killed on sight). Before long, the insane Left will be insisting that sex between a man and a woman is an unnatural, evil thing, and they will fill all the men’s restrooms with tampon dispensing machines while celebrating man-boy pedophilia because “love wins.”

Once you abandon reason and detach your worldview from biological reality, you can be swept down the rabbit hole to believe any insanity that’s put in front of you alongside socially-enforced demands for conformity and obedience. It won’t be long before lunatic Leftists demand the elimination of all mathematics, philosophy and science from public education, citing the “white privilege racism” of history’s philosophers and scientists. In place of the hard sciences, universities and public schools will teach “social justice,” victimhood and left-wing “language conformity,” which is a collision of libtard lunacy and desperate virtue signaling gender-loony pronouns. Soon, you won’t even be able to talk to a leftist because they will have destroyed the meaning of words, language and rationality itself. Leftism will descend into a cesspool of conforming gender-babble and spontaneous victimhood posturing spouted by snowflake crybullies who claim the right to murder anyone with whom they disagree. This, they call “utopia.”

Even right now, college campuses across America have become sewers of deranged “social justice” indoctrination that utterly lack any basis in law, reason or rationality. Colleges have descended into what are essentially domestic terrorism training camps for Antifa activists who quite literally plan to carry out a violent, Stalinesque purge of this nation. They are being taught that committing murder is perfectly acceptable as long as their targets are conservatives, Trump supporters, white people or successful business owners.

YouTube, of course, is aiding and abetting these terrorists by silencing the channels that dare question the runaway lunacy of it all. That’s because YouTube is largely run by the very same lunatics who are building Antifa terrorism groups and planning a “revolution” to overthrow this nation. The inmates are truly running the asylum.

That’s how YouTube, Google, Facebook and even Twitter have become a clear and present danger to this Republic. It’s also why I believe the offices of these tech companies will be among the very first targets to be occupied and controlled by pro-America forces once the civil war begins (which seems increasingly near with each passing day).

It’s also becoming clear to me that the deranged, lunatic Left has crossed the tipping point into utter lawlessness and the rejection of abiding by any rules at all. This has become abundantly clear in California’s “Sanctuary State” laws that reject federal immigration enforcement and openly seek to protect illegal felons, rapists and murderers from deportation. To the deranged Left, violent illegals are more important and valuable than American citizens, because illegals are granted the instant right to vote in California, which means illegal aliens are literally electing U.S. members of Congress.

Consider the implication of that for a moment and you’ll realize the extreme danger of allowing the lunatic Left to have any power at all. That’s why the tech giants must be urgently regulated to protect the free speech of internet users. The so-called Internet Bill of Rights (IBOR) is gaining momentum, and indications are that President Trump is going to push for new protections that would limit the ability of tech giants to selectively censor people based on the content of their speech.

That’s exactly what needs to happen, of course. If we don’t regulate tech giants and force them to stop their outrageous censorship, we will lose this nation forever, and it will be overrun by a deranged liberal mob of hate-filled lunatics who seek death, destruction, censorship and tyranny over everyone else. The result of that will be, as All News Pipeline warns, “Rivers Of Blood Flowing Through The Streets Of America.”

In fact, that outcome may already be inescapable, as the lunatic Left seems so far beyond reach that the possibility of reinserting Leftists into a law-abiding, democratic society appears to be virtually zero.

Stay informed. Read NewsTarget.com for daily news on politics, liberty and our Republic.