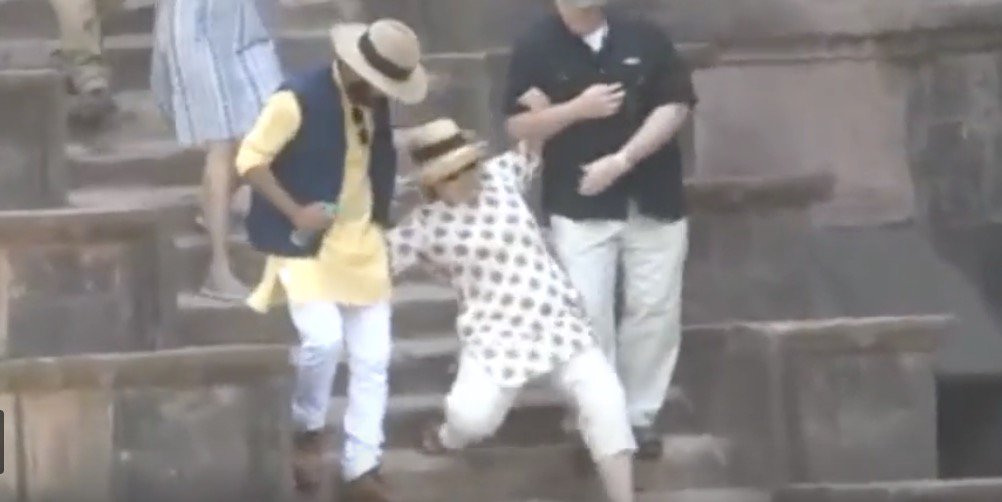 Failed presidential candidate Hillary Clinton nearly fell down a set of stairs twice on Monday despite having two men aiding her every step.

Clinton has been in the country taking part in the India Today Conclave, where she blamed her election loss on Trump voters who “didn’t like black people getting rights,” “don’t like women, you know, getting jobs,” and “don’t want to see that Indian-American succeeding more than you are.”

Note, the video goes great with the Benny Hill theme:

From The American Mirror:

Even though Hillary Clinton had help going down a set of stairs in India today, she still nearly fell down.

While visiting Jahaz Mahal in Dhar’s Mandu, Clinton was attempting to descend about 15 stairs.

She was holding the arm of an aide.

With Huma Abedin following behind, Clinton slipped about halfway down the descent, nearly tumbling down.

A man walking in front of her jumped to grab her as she reached for him.

Despite both men helping her get to the bottom of the stairs, she slipped again, nearly doing the splits.

This is who leftists wanted to be our president.