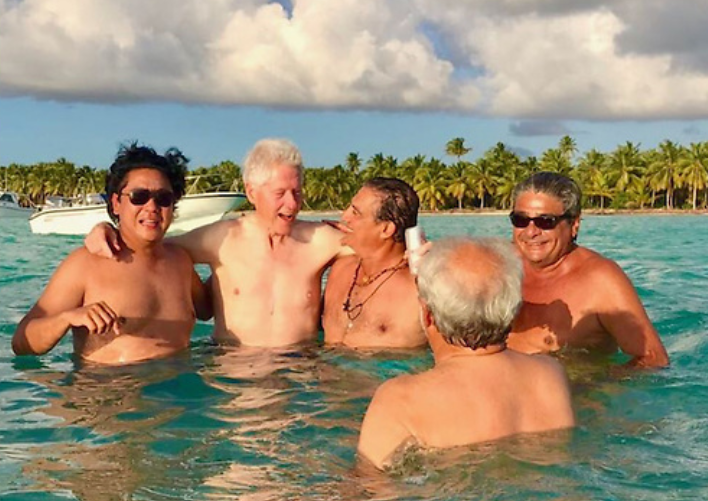 Damning photos were recently leaked showing the behind the scenes nature of the political elite and the facade that is the two-party paradigm. The photos show Bill Clinton partying with a rather unscrupulous individual at an elite island resort in Punta Cana who is tied to both the Clintons, President Donald Trump—and pedophilia.

As the political blowhards attempt to claim there is a difference between the left and the right, the truth is far different. While they may act like they hate each other in public, behind closed doors, the majority of politicians rub elbows and agree on what really matters to them, pleasing their corporate masters and expanding the empire.

The man in the photograph below proves this notion as he was a regular visitor to the White House and former associate of White House adviser and presidential son-in-law Jared Kushner. His name is George Nader.

Nader, a Lebanese-American businessman who has recently been in the news because of his current cooperation with special counsel Robert Mueller, is also an adviser to the United Arab Emirates—who wields massive influence over American politics.

Nader is getting press right now due to his involvement in a meeting in the Seychelles between Blackwater founder Erik Prince and Kirill Dmitriev, CEO of the Russian Direct Investment Fund. Dmitriev, whose role in the UAE-brokered meeting was revealed by The Intercept last November, had been appointed by Russian President Vladimir Putin in 2011 to administer the state-run sovereign wealth fund, according to the Intercept.

But Nader’s ties to back-channel intelligence deals is only the tip of the iceberg for this man. Highlighting the nature of his reach and power, in the 1980s, Nader was found with a cache of child pornography—only to have the charges thrown out and the records disappeared.

As the Atlantic reported last week, Nader was indicted in 1985 on charges of importing to the United States obscene material, including photos of nude boys “engaged in a variety of sexual acts,” according to publicly available court records.

According to prosecutors, as relayed in the U.S. District Court judge’s ruling on a motion to suppress evidence in the case, Nader received a package that included both a film of young boys engaged in sexual acts and pictures depicting nude boys. Authorities conducted a search based on a warrant, and similar material was found in a room that Nader rented in a Washington home, according to the court documents. The evidence discovered in the home was ruled inadmissible when the warrant was challenged, but the material delivered in the original package was not ruled inadmissible at the time. In July 1986, just ahead of a jury trial, the charges were dismissed, according a docket sheet from the U.S. District Court in Washington. Not all of the court filings are available online, and the reasons for the dismissal were not immediately clear.

In essence, the charges were thrown out because the key evidence — photos and film of nude children engaging in sexual acts — was also thrown out.

Then, years later this alleged pedophile surfaces behind the scenes and begins visiting the White House—frequently.

What’s more, as the images show, just before visiting the White House, Nader was partying away with Bill Clinton at some elite resort in Punta Cana.

You can’t make this up.

When we look at past associations with convicted pedophiles, it appears that these people have no problem associating themselves or looking the other way when dealing with them.

One obvious association shared by Clinton and Trump—which is similar to this one—is that of Jeffrey Epstein.

At the time, prosecutors from Acosta’s office, working with the FBI and documented for the court, foundthat, through assistance from several female assistants, Epstein “would recruit underage females to travel to his home in Palm Beach to engage in lewd conduct in exchange for money … Some went there as much as 100 times or more. Some of the women’s conduct was limited to performing a topless or nude massage while Mr. Epstein masturbated himself. For other women, the conduct escalated to full sexual intercourse.”

Rather than the minimum ten-year sentence the billionaire pedophile faced, Acosta’s arrangement with Epstein’s lawyers landed a part-time, eight hours per day county jail term for a scant 13 months in a club med prison—a travesty of justice indeed.

These are undisputed facts — yet, in April, Trump still appointed Acosta as his Secretary of Labor.

Acosta’s appointment should come as no surprise, given Trump’s outspoken praise for Epstein, including referring to the convicted pedophile as a “terrific guy,” he is “fun to be with,” and “he likes beautiful women as much as I do, and many of them are on the younger side.”

Giving Trump the benefit of the doubt with Acosta would be easier had he not made those comments. It would also be easier to overlook if he didn’t let George Nader, another alleged pedophile who’s extremely close with Bill Clinton who frequented Epstein’s private island on the infamous Lolita Express into the White House.

As Carlin famously said, “It’s a big club,and you ain’t in it.”

Below are three photographs that prove this notion and illustrate the disturbing reality that is the political elite.