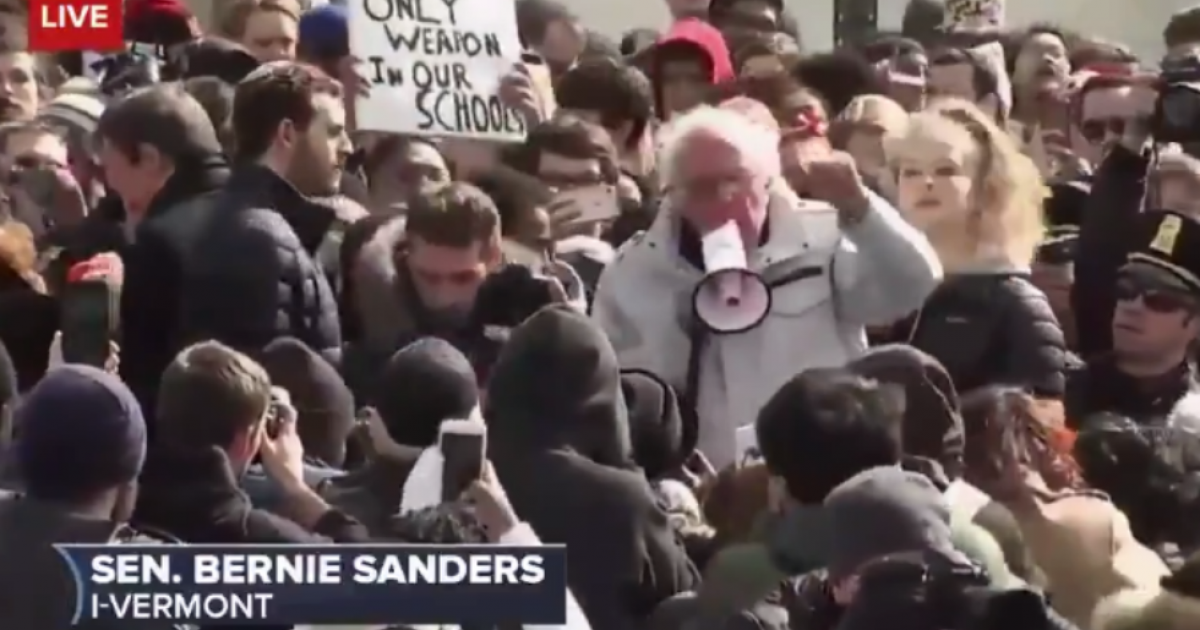 Well, you know the hypocrisy that is always on display with celebrities and Communist politicians who praise gun confiscation.  They inevitably are surrounded with armed guards.  Senator Bernie Sanders (D-VT) is no exception.

Sanders was flanked by armed guards as he attended the anti-Constitution, Communist gun grabbing protests led by children,  most of whom can’t even vote yet.

The Vermont senator live-streamed video of himself as he made his way through the crowd of gun confiscation advocates on Wednesday from Washington, DC.

At several points, you can see the armed guards positioning themselves between Sanders and the crowd.

The obvious question is, if these people are there to protest gun violence, why would there be a need for armed guards? Hmmm?

First, understand that these kids are only responding to a herd mentality, which is part of their indoctrination in US public schools now.  This is one of a plethora of reasons I advocate that God-fearing parents get their children out of public schools and start teaching them, not indoctrinating them, at home.  You can start for free here.

They are indoctrinating these kids to think they live in a democracy rather than a Constitutional Republic, something that is guaranteed in the Constitution itself (Article 4, Section 4).

It would do all of these kids well to have such a civic lesson taught to them for an entire year.  Then they may not be following the stupid narrative that people like David Hogg, CNN and Bernie Sanders are filling their heads with.

But it’s not just politicians like Sanders who demonstrate this hypocrisy.  Many of the celebrities who are cheering on these useful idiots are doing the same thing.  They advocate for gun confiscation while they surround themselves with guns.

Here’s what a few of these idiots had to say.

I am walking out with you in spirit, America- all the way from Dublin, Ireland! #NeverAgain https://t.co/sk1DLDL5dv

On the one-month anniversary of the Parkland school shooting, students are walking out in protest of Congress’ failure to act on gun violence. Let’s support them, and the March to Washington DC in ten days👊🏻 #MarchForOurLives

.@WhoopiGoldberg joined students on the streets in New York City who were taking part in #NationalWalkoutDay along with thousands across the country to rally for change in gun laws. https://t.co/f8u2wbJuik pic.twitter.com/USTIPRLluS

Proud of all of you! Never give up! You are THE change!

So amazing to see young people take back their power and USE it! #NationalWalkoutDay pic.twitter.com/nuUDdqkpkD

To all the kids walking out of school today, you are the change we want to see. Thank you. #NationalWalkoutDay

To all the students walking out today to honor of 17 killed in Parkland & demanding action against gun violence: We will follow your lead and protest with our voices, our bodies and our votes. This is just the beginning. See you in Washington on the 24th. #NationalWalkoutDay

Then there was this nonsense.

If more guns make us safer, why aren't we safe? #NationalWalkoutDay

The only way to stop criminals with guns is either to stop them with a person with a gun or have their hearts changed by the power of the Gospel of Jesus Christ.  Writing more pretended legislation won’t stop the shootings or any other crime.  Confiscating guns won’t do it either.  In fact, it will only make things worse, much worse.  If you don’t believe me, look to Russia or Chile.

However, as I’ve pointed out before, America is first in the world in terms of gun ownership and we aren’t even in the top 100 when it comes to murder rate.

Stick that in your pipe and smoke it gun grabbers!