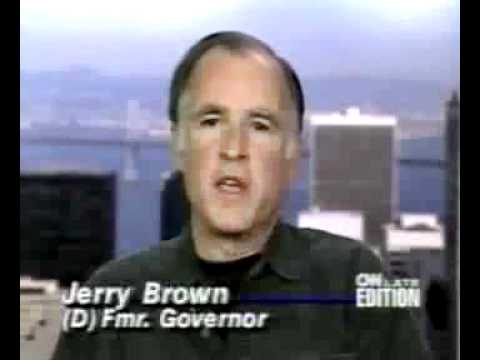 Psychopathy is a subcategory or extension of antisocial personality disorder. The hallmark attributes of a psychopath include pathological lying, a lack of empathy for others, selfishness, lack of guilt, and a superficial charm that’s deployed to manipulate others.

Not all psychopaths are violent serial killers. Many psychopaths actually find great success in the business world thanks to their ruthless nature — a disproportionate number of CEOs are psychopaths. Some other popular career paths for psychopaths include politics, law, media, and sales.

Jerry Brown is also a psychopath.

Brown said he didn’t have to lie anymore now that he’s no longer a politician. Responding to CNN anchor Frank Sesno’s question, “What did you lie about when you were governor?,” Brown said:

Despite that, Californians elected Jerry “It’s all a lie” Brown as their governor.

The most commonly used device for identifying psychopaths is the Psychopathy Checklist-Revised (PCL-R), a 20-item inventory of personality traits and recorded behaviors developed by Dr. Robert D. Hare in the 1970s.

Below is a self-administered psychopathy test, using 20 traits of Dr. Hare’s Psychopathy Checklist-Revised (PCL-R). For each attribute, give yourself a score of 0 to 2, where 0 = “not at all descriptive of me”; 1 = “somewhat descriptive”; and 2 = “describes me perfectly”.

When properly completed by a qualified professional, the PCL-R provides a total score that indicates how closely the test subject matches the “perfect” score that a classic or prototypical psychopath would rate. A prototypical psychopath would receive a maximum score of 40, while someone with absolutely no psychopathic traits or tendencies would receive a score of zero. A score of 30 or above qualifies a person for a diagnosis of psychopathy. People with no criminal backgrounds normally score around 5. Many non-psychopathic criminal offenders score around 22.

When I first posted the psychopathy check-list in November 2015, I had included a poll (see below), which showed that, happily and as we would expect, the majority of FOTM readers who took the self-administered test got a low score.

But there’s actually a simpler test for psychopathy.

Read this question, come up with an answer, and then scroll down to the bottom for the result. This is not a trick question.

A woman, while at the funeral of her own mother, met a guy whom she did not know. She thought this guy was amazing. She believed him to be her dream guy so much, that she fell in love with him right there, but never asked for his number and could not find him. A few days later she killed her sister.

Question: What is her motive for killing her sister?

[Give this some thought before you answer]

She was hoping the guy would appear at the funeral again.

If you answered this correctly, you think like a psychopath. This test was devised by a famous American psychologist who used it to determine if one has the same mentality as a killer. Many arrested serial killers took part in the test and answered the question correctly.