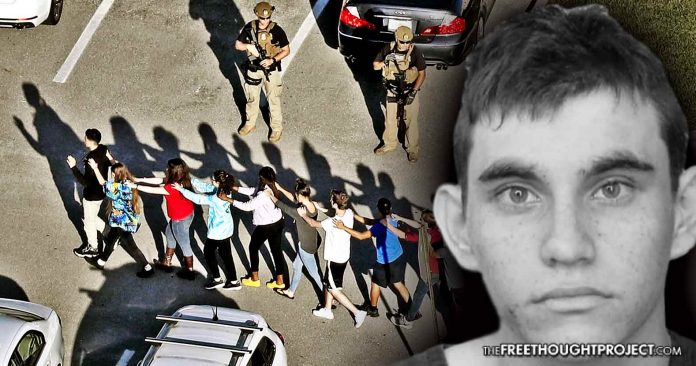 Parkland, FL — It has been one month since the deranged Nikolas Cruz allegedly walked into Marjory Stoneman Douglas High School with an AR-15 and began killing children. As expected, instead of providing answers to the public’s questions, the government’s reaction to the shooting consists of little more than stripping Americans of their rights.

Instead of attempting to find the cause of the shooting, the government and media alike are focusing on the inanimate object used to carry it out. On Wednesday, students across the United States—who’ve been subjected to massive propaganda campaigns to relinquish their right to self-defense—will walk out of class to beg the government to disarm them.

In the meantime, no actual solution to preventing another attack is being considered because the media and the government refuse to address the real issues.

Here at the Free Thought Project, we refuse to sit idly by as the hard questions about the Florida shooting go unanswered. Below is a list of five questions that need to be addressed. Until these questions are answered, all the legislative responses and government reactions to the tragedy in Florida are little more than political theater.

Why is the media refusing to report on Cruz’s alleged use of antidepressants?

In a likely attempt to protect their corporate sponsors in the pharmaceutical industry, the fact that Cruz’s family told reporters that he was on medication for depression has managed to remain all but a blip in the mainstream.

As TFTP reported, the people who knew Cruz described him as a troubled teenager who was adopted when he was young and then was forced to move in with a friend after both of his adopted parents died. Jim Lewis, an attorney for the family that gave Cruz a place to live after his mother died in November, told The Washington Post that they knew Cruz was depressed, but they believed he taking steps to manage his depression.

Family member Barbara Kumbatovich told the Herald, “she believed Nikolas Cruz was on medication to deal with his emotional fragility.” She was a sister-in-law of Lynda Cruz, the suspect’s mother, and she also told the Sun-Sentinel that she believes Nikolas has been on medications for several months.

The reason this information is so important is that the side effects of some of these medications are known to make people violent and suicidal. The makers of these drugs have been sued for hundreds of millions of dollars after people have tied their use to mass killings and suicides.

Some of the side effects of antidepressants include aggression, agitation, changes in behavior, hallucinations, suicidal thoughts — and homicidal ideation.

The use of these medications has been tied to nearly every mass shooting in modern history and the president thinks banning bump stocks takes priority.

Why were first responders told to stand down?

As the cops who failed to go into the school to stop the shooter garnered their well-deserved scorn in the media, news of the stand down order barely registered on the news cycle at all. Lives could’ve been saved but first responders were told not to help.

“Everything I was trained on mass casualty events says they did the wrong thing,” said the first responder, who spoke with WSVN Miami News 7 reporter Brian Entin on the condition of anonymity.

“You don’t wait for the scene to be cleared. You go in immediately armed. Retrieve the victims. You can’t leave the victims laying there,” he explained.

But they could not go in.

“I would hypothesize I could have saved lives. I can’t say for sure,” he said, adding, “I would have risked my life to go in. I was eager to.”

"Everything I was trained on mass casualty events says they did the wrong thing." I spoke with a seasoned emergency medical responder who was one of the first to the Stoneman shooting. He doesn't want me using his name for fear he will get fired. Here are his exact quotes. @wsvn pic.twitter.com/t9trsOEaek

“Broward County sheriff’s deputies were supposedly told not to enter Marjory Stoneman Douglas High School unless they had body cameras on, which they did not have,” reported The Daily Wire.

Why did the FBI and police essentially allow the shooting to take place by failing to act on the myriad of warnings?

According to a report by CNN, records obtained from the sheriff’s office by CNN show the law enforcement agency received at least 45 calls for service relating to Cruz or his brother from 2008 to 2017, before the attack at Marjory Stoneman Douglas High School in Parkland on Feb. 14. The sheriff’s office has insisted it received no more than 23 calls for service regarding Cruz or his family.

As TFTP previously reported, Cruz warned that he was going to shoot up a school and kill people and the FBI did nothing. “I’m going to be a professional school shooter,” A YouTube user named Nikolas Cruz commented on a video on Sept. 24, 2017. The video was posted on the channel “Ben The Bondsman,” and the owner, Ben Bennight, immediately took a screenshot and submitted it to the FBI. Nothing happened.

While this is bad enough, the Sheriff’s department records show that police were given this exact same warning—a year before—because Cruz had been declaring his wishes to shoot up the school publicly.

According to the records, in 2016, a neighbor warned police that Cruz posted on Instagram that he said he “planned to shoot up the school.” The person who made that call came forward last month and said that she begged the sheriff’s office to intervene. Instead of intervening though, police told her that they couldn’t act until Cruz actually did something.

The incompetence is staggering, especially given the fact that making a direct threat of violence is illegal.

A few months after he said he wanted to shoot up the school on Instagram—because the police failed to heed this warning and the dozens of other ones—Cruz bought the rifle he would use in the shooting.

What’s more, the school even warned police that Cruz said he wanted to harm himself and others and he wanted to “purchase a gun.” All of this was ignored and Cruz was still allowed to buy a gun.

On the day his mother died, Broward Sheriff’s office received calls from family members warning deputies that he had weapons and that Cruz was a threat. They begged the deputies to “recover the weapons.” Nothing happened.

Days later, yet another person called the Sheriff’s office and told them that Cruz was going to shoot up the school. The caller mentioned that Cruz was “collecting guns and knives,” and “could be a school shooter in the making.”

Again, instead of acting, records show Broward County “referred caller to the Palm Beach Sheriff’s Office,” which had jurisdiction over Cruz’s temporary home with a family friend. Within days, Cruz was back south in Broward County staying with another friend’s family, according to CNN.

Why haven’t we heard any more on the claims of multiple shooters?

In one chilling account, a high school student not only told reporters that she witnessed multiple shooters, but she also explained how she was talking to the suspect, Nikolas Cruz, as she heard rounds being fired down the hall.

Alexa Miednik told KHOU-TV journalist Matt Musil:”The fire alarm went off and the principal came on the speaker saying ‘everybody needs to evacuate right now,’ so that’s what I did.”

“As I was going down the stairs I heard a couple of shots fired, everybody was freaking out saying that it was a gun,” explained Miednik.

“As we were walking, the whole class together, I actually was speaking to the suspect Nikolas Cruz,” said Miednik, as she made quotes with her fingers when saying ‘suspect’.

“So, you were walking down the hall with him?” asks the reporter. “Weren’t you scared?”

“In the moment I wasn’t,” replied Miednik. “because there was obviously…definitely another shooter involved.”

“Oh, you think he was not the only one?” asks the surprised reporter.

“No, definitely not,” replied Miednik.

“Why do you say that?” the reporter asked.

“Because when shots were fired, I saw him after the fact. The shots were coming from the other part of the building. So, there definitely had to be two shooters involved,” she explained.

In spite of Miednik’s claims being backed up by other accounts of multiple shooters, we’ve heard nothing else about them from authorities.

Why are police refusing to release the surveillance footage?

Broward County Sheriff Scott Israel, who has already been caught contradicting the official story, is claiming that the surveillance footage must remain secret.

The South Florida Sun-Sentinel, the Miami Herald, and CNN have filed an open records lawsuit against the Israel and school Superintendent Robert Runcie for their role in this secrecy.

Officials claim that the video is exempt from Florida sunshine laws because its release would somehow put lives at risk and expose the district’s security system. However, as the NY Post reports, this is not true.

First, disclosure of the videos would pose no danger to students because Building 12, where the shooting took place, will be demolished.

Second, key investigative records, transcripts and logs in the active criminal probe against the Parkland school shooter have already been released to the public. Israel himself coughed up call logs documenting 23 times the shooter’s family or neighbors called deputies to the house. Additional dispatch records obtained by local and national media outlets revealed 22 more calls to law enforcement dating back to 2008 that had not been initially communicated by the selectively disclosing sheriff.

Moreover, the open-records lawsuit notes that Israel has already publicly described in detail what the video shows about Peterson’s actions: He arrived at the west side of Building 12, took position, got on his radio, had a view of the western entry of Building 12 but never went in for “upwards of four minutes” while the shooter slaughtered 17 innocent students and teachers.

By refusing to release the video, police are creating an environment that fosters distrust, and rightfully so.

Indeed, until all of these questions are answered, the people have no reason to trust the authorities at all.