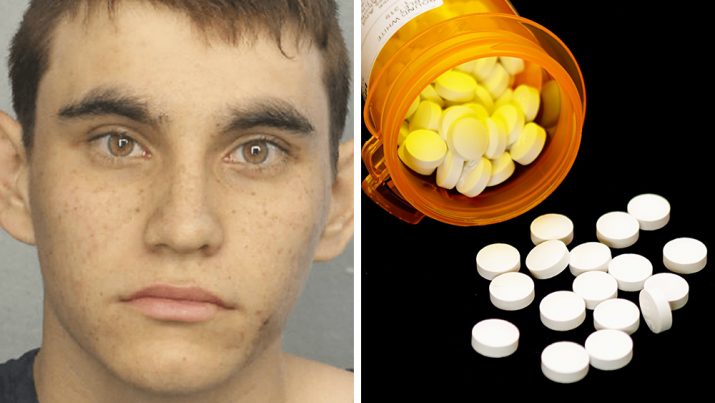 Let’s start with a question. When it comes to the debate over mass shootings in America, why does the discussion always go toward tougher gun laws?

And yet, we are not talking about the role of antidepressants and other psychiatric medication.

The truth? The connection between mass shooters and these medications is stunning.

Let’s give it a Reality Check you won’t get anywhere else.

The response to the mass shooting in Parkland, Florida has been call after call for tougher gun laws, but seems to ignore the issues once again surrounding antidepressants.

Without question, Nikolas Cruz, the 19-year-old man who killed 17 students and wounded more than a dozen that afternoon February 14, had for years exhibited signs of mental health problems. We talked about it on Reality Check a few episodes back.

Here’s what we know about Cruz.

Cruz’s adoptive father Roger Cruz died more than a decade ago, and his adoptive mother Lynda Cruz reportedly struggled with her son and his brother Zachary until her death in November 2017.

Barbara Kumbatovich, a former sister-in-law, told the Miami Herald, that Lynda Cruz “did the best she could,” and that Nikolas and Zachary “were adopted and had some emotional issues.”

Kumbatovich told the publication that she believed Nikolas was on medication to deal with those issues and that Lynda “was struggling with Nikolas the last couple years.”

In addition to Kubatovich’s statements, records show that police were called to the Cruz residence as many as 45 times since 2008, according to Buzzfeed News.

Between reports that Cruz had previously pulled a gun on his brother and mother, and an anonymous FBI tip from January that Cruz had been suicidal but then decided “he wants to kill people” and that he was “going to explode”… all evidence is indicating a clearly unstable young man with numerous documented concerns from those who knew him.

We still don’t know what, if any medications Cruz might have been on. But we do know that the number of high profile mass shootings over the past 30 years, and the link to psychiatric medication, is deeply concerning.

1998: 15-year-old Oregon school shooter Kip Kinkel, who opened fire in his school cafeteria, he was on Prozac.

An important fact about Luvox. According to author David Kupelian from his book, How Evil Works, “Luvox manufacturer Solvay Pharmaceuticals concedes that during short-term controlled clinical trials, 4 percent of children and youth taking Luvox — that’s one in 25 — developed mania, a dangerous and violence-prone mental derangement characterized by extreme excitement and delusion.”

In 2005, 16-year-old Jeff Weise, living on Minnesota’s Red Lake Indian Reservation, shot and killed nine people and wounded five others before killing himself. Weise had been taking Prozac.

2007: Virginia Tech shooter Seung-Hui Cho, he shot and killed 32 people. Officials found prescription medicine “related to the treatment of psychological problems” among his personal belongings, according to the New York Times.

2013: Navy Yard shooter Aaron Alexis sprayed bullets at office workers and in a cafeteria, killing 13 people including himself. Alexis had been prescribed Trazodone by his Veterans Affairs doctor.

2014: Elliot Rodger, the Isla Vista, California killer who went on a shooting spree after stabbing three men to death, had been prescribed psychotropic drugs, according to The Los Angeles Times.

2017: Las Vegas shooter Stephen Paddock, according to the Las Vegas Review Journal, had been prescribed diazepam.

Known by its brand name Valium, “a sedative-hypnotic drug in the class of drugs known as benzodiazepines, which studies have shown can trigger aggressive behavior.”

Paddock received the prescription in June 2017. That October, he carried out the deadliest shooting in modern American history.

And there are dozens of other examples. To be clear, we’re not saying that prescription drugs are to blame for mass shootings.

The underlying issues of mental health that these shooters seem to all have, however are alarming. And knowing that the majority of them were prescribed antidepressants, you have to consider this…

Some of the most alarming side effects of Prozac include suicidal thoughts, self-mutilation and manic behavior.

Zoloft can cause hallucinations, agitation and memory problems.

For Valium, it’s also hallucinations, depression, and thoughts of suicide.

These are dangers that drug makers themselves are required to disclose.

The use these antidepressants in America has skyrocketed. As of 2013, 12 percent of Americans were filling prescriptions for them. And while millions of people do not suffer violent episodes, the drug makers warn that some people may… and do.

You’ve heard some of those warnings in the commercials those pharmaceutical companies pay to run on mainstream media networks. According to the New York Times, “771,368 such ads were shown in 2016 … an increase of almost 65 percent over 2012.”

Pharmaceutical companies were estimated to spend $6.4 billion on direct-to-consumer advertising in 2016, according to USA Today.

So what you need to know, is correlation does not always equal causation. We do not know that the reason for these mass shootings is because of any one drug or any number of drugs. Nor do we know how much of a role these drugs may have played at all… but the question is, why is that?

Why are politicians and mainstream media pushing so many discussions about guns and virtually no discussion of whether or not antidepressants are playing a role? Because the numbers are compelling and beg a question that deserves an answer.

Article posted with permission from Truth in Media