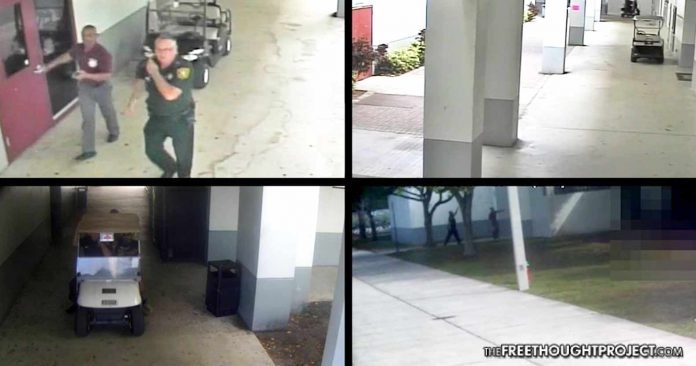 Parkland, Florida – More than 27 minutes of surveillance footage has been released from security cameras at Marjory Stoneman Douglas High School, for the purpose of showing former deputy Scot Peterson standing outside of the building, while students and teachers were murdered inside.

In response to the actions of the armed school resource officer, Broward County Sheriff Scott Israel said the footage “speaks for itself.”

“His actions were enough to warrant an internal affairs investigation, as requested by Sheriff Scott Israel on Feb. 21. After being suspended without pay, Peterson chose to resign and immediately retired rather than face possible termination,” a statement from the department noted.

According to the time stamp on the video, the footage begins at 2:22 p.m. on Feb. 14, less than one minute before police claim that suspect Nickolas Cruz opened fire inside the freshman building.

In the video, Peterson can be seen running towards a golf cart at about the same time the first 911 call was made to Coral Springs Police reporting a shooting. He then runs to another side of the building, and the surveillance footage changes to a different angle of the building.

It was during that time that Peterson reportedly said over his police radio, “Be advised we have possible, could be firecrackers, I think we have shots fired, possible shots fired—1200 building.”

According to a timeline of the shooting from the Sun Sentinel, Cruz was picked up by an Uber at 2:06 p.m. and dropped off at the school at 2:19 p.m. He then entered the freshman building at 2:21 p.m.

The school confirmed that Cruz exited the building at 2:28 p.m. and blended in with other students who were fleeing campus. A teacher at the school who witnessed the shooting said she initially thought the shooter was a police officer because he was dressed in full body armor, and was carrying a rifle she had never seen before.

Given that he may have set off more warning signs if he had been fully clothed in body armor when he was riding in an Uber or entering the school, the timeline gives Cruz just 7 minutes to load his rifle, put on his body armor, shoot 31 people, discard the gun and the body armor and then exit the building.

The surveillance footage released by the Broward County Sheriff’s office ends at 2:50 p.m., and while it does show some students walking by as they exit the building, it fails to show Cruz entering or exiting—details that would arguably help to put the public’s mind at ease.

As The Free Thought Project has reported, it has been one month since the shooting occurred, and even though 17 innocent people were killed, the surveillance footage that has just been released serves as a reminder that some of the most glaring questions and inconsistencies are the ones that both law enforcement and the mainstream media refuse to address.

What the release of this footage highlights is the insulting attempt to appease the public and media’s demands for actual video that shows the actual crime. Until this is released, authorities in Florida are doing an injustice the victims and their families alike.