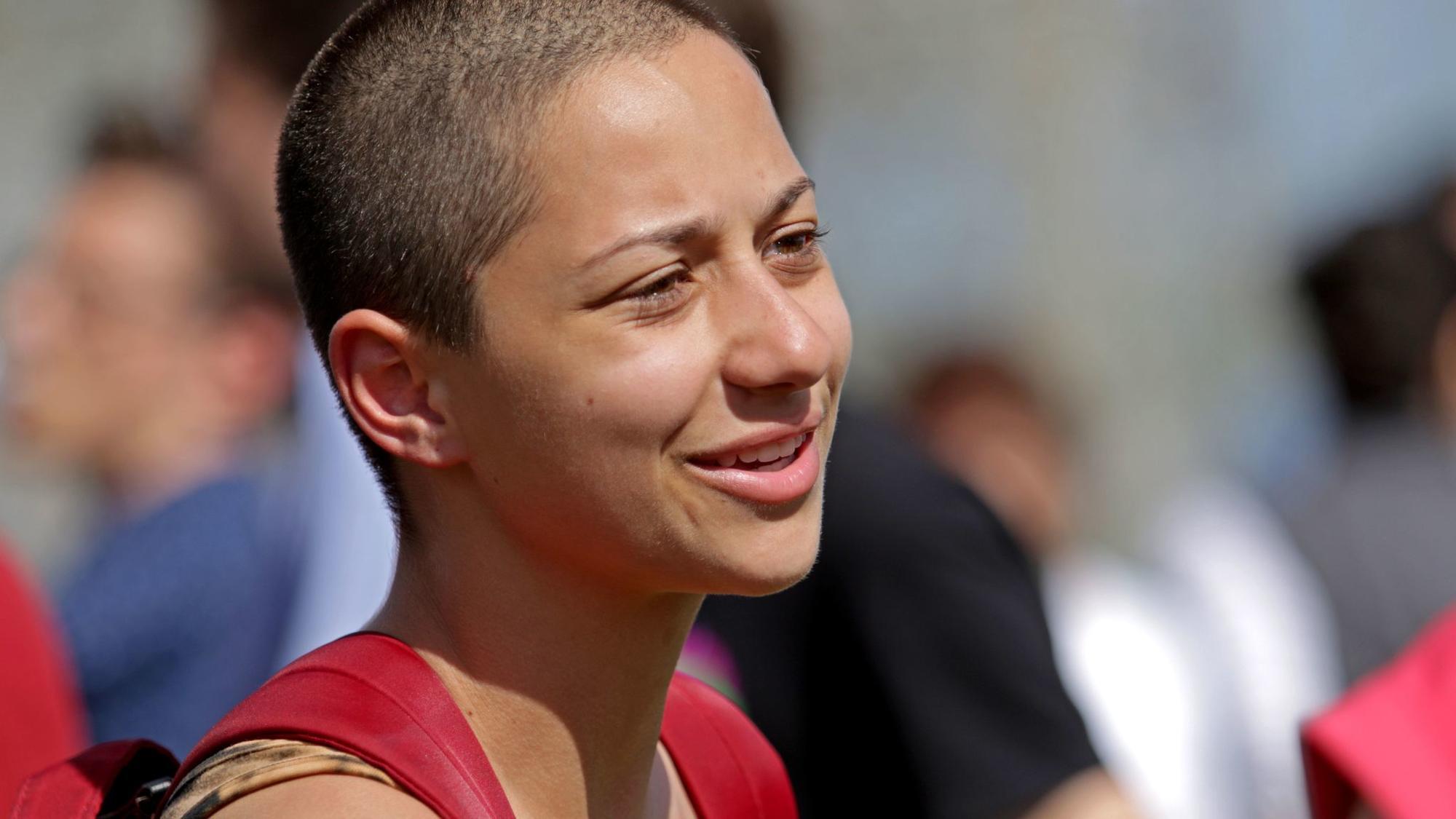 Note that at the 0:14 mark in the video, the CNN anchor woman clearly identified both Gonzalez and Hogg as Douglas High students:

“Two of those students who [sic] you’ll recognize join us now, Emma Gonzalez and David Hogg.”

Throughout the interview with CNN, Gonzalez repeatedly identified as a student.

“I do want to reiterate the FBI were some of the amazing first responders who were helping us get to safety.”

In response to the anchor’s question of whether they’ve been invited to President Trump’s listening session with “students,” Gonzalez said (3:03 mark):

“Um, I believe we’ve been invited but neither of us is going. We have a preset town hall meeting that we’ll be attending.”

“Hey guys, are you gonna be able to go back to school this week or next week? Are you going to go back into the building where this happened?”

With a deep sigh, Gonzalez says:

“Well, first of all, the freshmen building is being torn down. But the rest of the school is staying up and, as soon as we can, we are going to go back into the school, as soon as they say school is on Monday, I’m going to be there I’m pretty sure, unless I have interviews or somewhere to be, we are going to be at school with the people who need us. We need to stand with our peers.“

But an IT specialist named Dan Cromer (via James Fetzer) claims to have discovered two stunning things about Emma Gonzalez:

The problem is Dan Cromer does not provide sources, embedded or otherwise, with which we can verify his explosive claims.

Below is my effort to independently verify Cromer’s assertions.

(1) IS Emma Gonzalez the cousin of David Hogg?

To begin, David Hogg’s father, said by David to be a former FBI agent, is Kevin Hogg.

Kevin Ralph Hogg‘s profile on TruthFinder says that his wife is Rebecca Boldrick and that in 2014, he moved from Torrance, CA (4 miles from Redondo Beach, CA) to Parkland, FL.

Recall that David Hogg had graduated from Redondo Beach High School. Rebecca Boldrick has a family picture on her Facebook page — of David Hogg, Rebecca, David’s sister Lauren, and Kevin Hogg (see below). Rebecca is a proud supporter of the Planned Parenthood abortion mill.

I think we can confidently conclude that Kevin Ralph Hogg is the father of David Hogg.

According to TruthFinder, the birth name of Katherine J. Gonzalez (who lives in Rancho Santa Margarita, CA) is Katherine J. Hogg, which suggests she and Kevin Hogg are siblings.

Robert L. Hogg’s timeline has the births of three children:

From this, it’s safe to say that Kevin Hogg and Katherine Gonzalez are siblings, which means their respective offsprings are cousins.

Among her Facebook friends are Dorothy Hogg, Kevin Hogg, Rebecca Boldrick, and David Hogg. Among the photos on Kathy Gonzalez’s Facebook page is a pic of young David Hogg with his grandmother (Dorothy Hogg) in 2008:

However, there is no trace of any Emma or Emma Gonzalez in Kathy Gonzalez’s Facebook page — not a photo; not among any of Kathy’s 50 Facebook friends. Nor is Emma Gonzalez a family member of Katherine Gonzalez, Kevin Hogg, or Dorothy Hogg, according to their profiles on TruthFinder.

Dan Cromer does not provide any evidence that Emma Gonzalez is the daughter of Katherine Gonzalez — and therefore the cousin of David Hogg. All Cromer did is to put up a pic of Emma Gonzalez (see below), with the comment, “Emma is clearly a Hogg” — referring probably to the pic (above) of Vincent Gonzalez ( son of Kathy Gonzalez) with grandma Dorothy.

My conclusion, therefore, is that we don’t have evidence that Emma Gonzalez is David Hogg’s cousin.

Another angle to explore is whether Emma Gonzalez is a student at Marjory Stoneman Douglas High School.

Dan Cromer claims she had graduated from a California high school and from New York University, and is a professional actress and writer.

Cromer refers to the profile of an Emma Gonzalez on IMDb, which says: