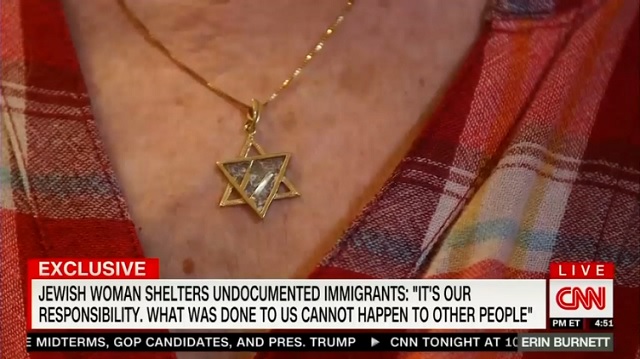 CNN ran a sob story on Wednesday comparing ICE agents’ enforcement of US immigration laws to Nazis rounding up Jews for the Holocaust.

In a segment for Erin Burnett’s “OutFront,” CNN correspondent Kyung Lah interviewed a Jewish woman who decided to hide illegal aliens in her home because she was “driven by thoughts of the Holocaust.” CNN said the Jewish woman is part of an “interfaith network” working to shield illegal aliens from deportation:

The network began after the election of President Trump and the fears — and then reality — that undocumented immigrants would face stricter enforcement action. For the woman, the link from the present to the history of World War II is strong.

“I grew up in the time where the Holocaust was not so far behind me,” says the woman. “There was always that awareness, as a Jew, that it’s possible to be kicked out of a country where people thought they were home. And many of those people didn’t make it.”

She says there is a strong feeling in the Jewish community. “We cannot let this happen. It’s our responsibility. What was done to us cannot happen to other people.”

As News Busters notes, “Lah went a step further in the accompanying Erin Burnett segment, actually provoking the Holocaust comparisons from the Jewish woman, asking, ‘Do you hear the echoes of history here?'”