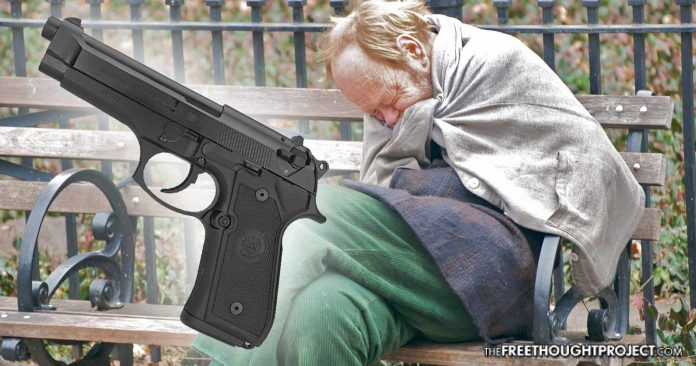 A candidate for Senate from Michigan named Brian Ellison is raising money to buy pump style shotguns for the homeless. Ellison says that homeless people have the right to defend themselves just like the rest of us do, and they are victims of violence more often than the average person as well.

According to a report published by Springer Publishing Company, LLC entitled Violence and Victims, Volume 29, Number 1, 2014, “Individuals who are homeless have an increased risk of experiencing myriad social problems including victimization and violence. The prevalence of violent victimization in the homeless population has been estimated to range from 14% to 21% and approximately one-third report having witnessed a physical attack on another person who was homeless. This rate of violence is highly disparate when compared to the general population in which only 2% report experiencing a violent crime.”

When Michigan Radio asked Ellison if he trusted the homeless people with guns, he pointed out that it is not fair to judge them like that and put restrictions on them.

Ellison told The Guardian that the individuals recieving the guns would be interviewed and it would be determined that they were qualified and had proper training.

Ellison is calling his campaign, “Arm the Homeless,” and the topic is obviously beginning to cause a stir in the media. He is not running as a Democrat or Republican but is instead running as a Libertarian.

On a fundraising page, Ellison pointed out that police have no duty to protect us and referred to the recent shooting in Parkland where cops hid during the most intense moments of the shooting.

“How long can we as a society sit back and allow peaceful citizens of this great country to be targeted for those that view them as weak targets? According to case law in the decision of Warren v. District of Columbia, the police do not owe a specific duty to provide police services to citizens. What this means is that as individuals we can not count on the police to protect us, as they are under no obligation to do so. We saw this recently in the Parkland shooting when Broward County Sheriff Deputies stood outside while a gunman killed 17 students and teachers. I believe it is time we take a stand against the injustice and victimization of the homeless,” the fundraising page said.

Ellison announced his campaign just as students across the country are taking advantage of a free day off school to protest for stricter gun control. When asked what he thought of the protests, Ellison said, “I’d say those kids have been watching too much mainstream media, because I don’t think they understand the reality of the situation.”