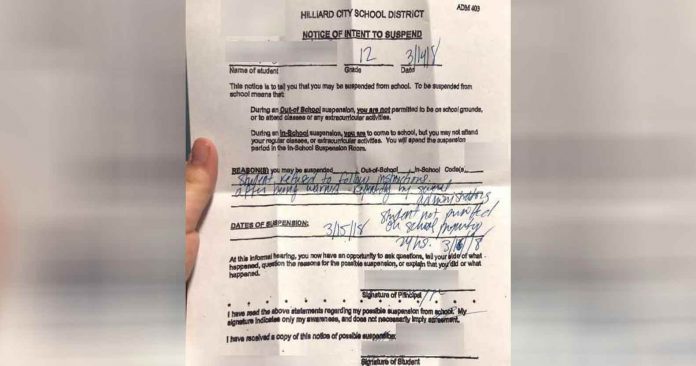 The idea that this week’s school walkout was some grassroots movement by students who are seeking to challenge the status quo is a farce. The entire walkout was organized and sanctioned by the establishment and, as an incident out of Ohio shows, in one instance, choosing a side was even mandatory.

On Wednesday, millions of students across the country were encouraged by the government, mainstream media, and even their own school systems to walk out of class and demand the government take away their rights. It was, by no means, a challenge of authority and, in fact, it was a celebration of it.

Hilliard Davidson High School senior Jacob Shoemaker proved this point when he received a suspension for refusing to leave the classroom to participate in the walkout.

According to school officials, students were told they could participate in the walkout or go to the commons area for an alternative study hall. Shoemaker said he did not want to choose a side so he remained in the classroom instead.

Shoemaker told the Associated Press that school is not the place for divisive politics and to make his statement, he chose not to take sides. So, the 18-year-old was suspended.

Shoemaker told 10TV that he knew remaining in class would come with consequences and he was prepared to receive whatever punishment he had coming.

When he received the suspension, a friend published a photo of the notice online where it quickly went viral.

“Student refused to follow instructions after being warned repeatedly by several administrators,” the letter said. “Student not permitted on school property.”

The school promptly responded to state that Shoemaker was not suspended for choosing to abstain from the gun control debate. However, as Shoemaker explains, by forcing the students to leave the classroom for a political event—when they are supposed to be in class—he was compelled to take a side by the school and he chose not to do so.

Scott Shoemaker, Jacob’s father told 10TV that he thought the punishment his son received from school was harsh and they had no idea how much attention it would garner them.

To show how politicized the public education system is becoming in America, Shoemaker was not the only one to receive punishment for their views or lack thereof that day.

According to Jerusalem J. Greer, a blogger whose 17-year-old son attends Greenbrier Public School in Greenbrier, Arkansas, her son and two other teens face actual physical harm from the school for participating in the walkout.

“My kid and two other students walked out of their rural, very conservative, public school for 17 minutes today,” said Greer. “They were given two punishment options. They chose corporal punishment. This generation is not playing around.”

As the Daily Beast reports, Greenbier Public Schools “authorizes the use of corporal punishment to be administered in accordance with this policy by the Superintendent or his/her designated staff members who are required to have a state-issued license as a condition of their employment.”

Students are “given an explanation of the reasons for the punishment and are given an opportunity to refute the charges.”

When people questioned why she would let the school physically harm her son over the walkout, Greer said, “They choose this and we supported their choice.”

Yep. They could chose in school suspension or this. They choose this and we supported their choice.

In the ostensible land of the free, children are swiftly becoming pawns of the establishment. These incidents illustrate the notion that through the public school system, children are being indoctrinated into the two-party paradigm.

What’s more, through this indoctrination, students are being divided and conquered before they become old enough to even challenge the establishment on their own. A bleak scenario indeed.