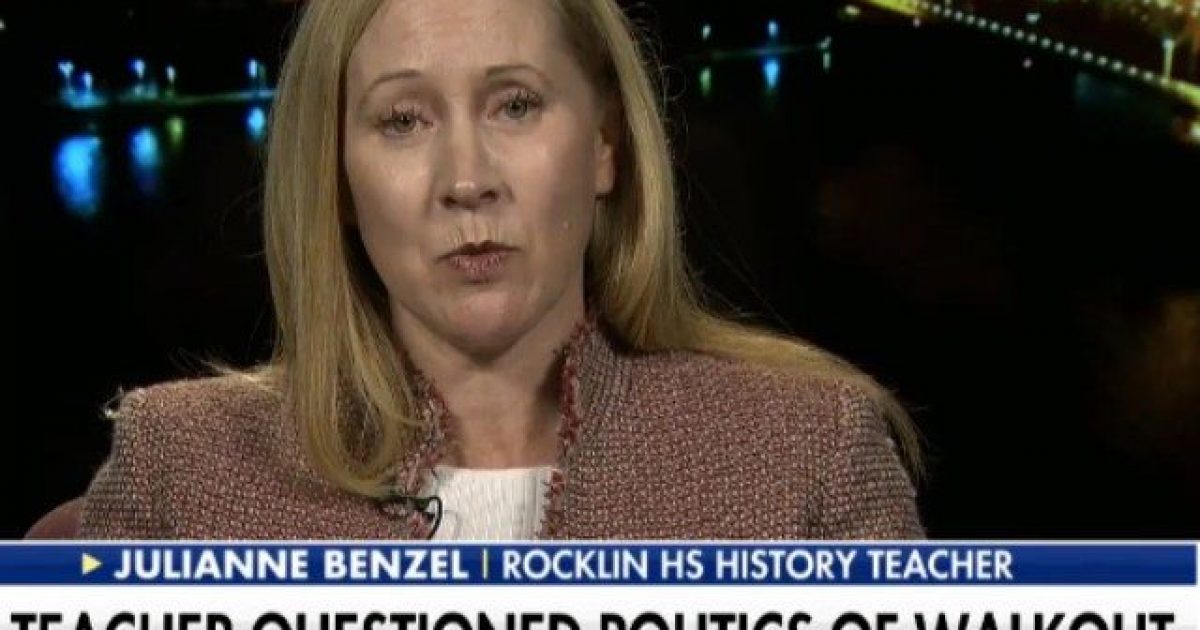 A California teacher was placed on paid leave after she dared to question if pro-life students would be allowed to walkout of schools in the same manner the anti-Second Amendment students did earlier this week.

Julianne Benzel, a teacher in Sacramento, California, was placed on paid leave after some viewed her questions as “anti-abortion.”

Diana Capra, the school district’s chief of communications and community engagement, said in a statement: “The teacher was not penalized or placed on leave based on her viewpoints. …The district can clarify that the action was taken due to complaints from parents and students involving the teacher’s communications regarding… the student-led remembrance activities.”

Right, so, it appears that Breitbart’s Senior Editor-at-large Joel Pollack was right.  The schools are siding with political agendas.  They are siding with parents and students who may support the murder of the unborn while trying to disarm the American people, but they cannot stand by their teacher for asking a simple question as to whether or not those students who support life can also perform the same type of protest as the anti-Second Amendment students.

Benzel said that she had to take a “mental health” day after being asked to return to work on Friday.  However, she seems intent on returning on Monday.

“I teach over 120 students and [administrators] took two students and one parent’s complaint and … took that minuscule evidence, did not corroborate it with any other students or parents and basically targeted me,” Benzel said.

According to Benzel, only one parent and two students took the issue up with Rocklin School District administrators.

“I teach over 120 students and [administrators] took two students and one parent’s complaint and … took that minuscule evidence, did not corroborate it with any other students or parents and basically targeted me,” Benzel said.

See that?  One parent and two students, a pretty small minority made an issue of this, but as they say, the squeaky wheel gets the grease.

Imagine if pro-American, pro-life and pro-Second Amendment Americans stood up and let their voices be heard and started calling out the little Communists in their neighborhoods in the same manner, and did it consistently to shame them for their deplorable stance on these issues.  We would probably see a major paradigm shift in the culture.

Good for Ms. Benzel for pointing out the absolute hypocrisy of her school district.  Other teachers should follow suit.  Shame on the school for not supporting her.