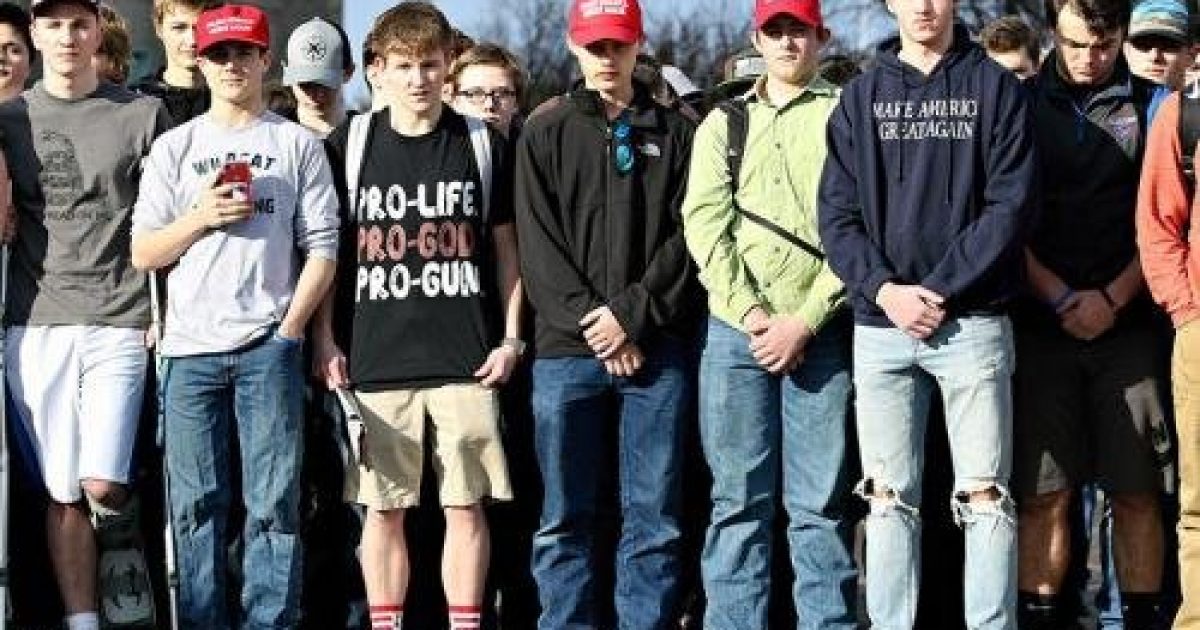 While the lamestream enemedia has paraded the children of Parkland, FL, who support people control and gun confiscation legislation, led by David Hogg, across the TV screens of America as the voice for all young people in this republic, it comes as no surprise these so-called news organizations are exploiting children for an anti-constitutionalist political agenda.  Hogg’s group is portrayed as “being the voice of young people across the nation” when it comes to petitioning government to limit the rights of individuals to keep and bear arms, particularly among 18 to 20-year-olds.  However, what the lamestream enemedia is not reporting is the huge portion of young people, 18 to 20 years of age, who support the right to keep and bear arms in order to be responsible for their own defense.

In the month since the high school shooting in Parkland, Florida, American television screens have been images of angry teenagers demanding that grown-ups do something about gun violence in the United States.

But there’s a huge part of the young adult population who aren’t making it onto the mass media’s television screens, but have evidently decided to do something about gun violence on their own:

Arm themselves so they can be responsible for their own defense.

According to the Bellevue, Washington-based Second Amendment Foundation, the organization has experienced a massive surge in people aged 18 to 20 joining or supporting the organization — a spike of almost 1,200 percent.

In a news release, foundation founder and Executive Vice President Alan Gottlieb attributed the spike to the fact that one of the most tangible results of the aftermath of the Marjory Stoneman Douglas High School shooting has been a new gun law in Florida that bans purchases of rifles by those under 21.

“We normally don’t get that many members or donors in that age group, since the gun rights movement typically trends toward older Americans,” Gottlieb said in the release.

“But the 18- to 20-year-olds have never been specifically targeted before, and they are obviously alarmed. This influx of young Americans into the gun rights movement is important, not just to respond to the current gun control threat, but as the movement has gotten older, it is encouraging to see so many young adults getting involved in support of Second Amendment rights.”

It appears the lamestream enemedia promoted “face man” of the gun-grabbing teenagers is not speaking for the entire “teenage” population.  But, everyone should know by now that the lamestream enemedia is biased toward anti-constitutional views one would consider progressive ideology.  And, despite Hogg and his cohorts claiming “expert” status for surviving a school shooting, they are not experts as they themselves have shown and this new surge among 18 to 20-year-olds to support the right to keep and bear arms proves.

As States across the Republic move to limit the unalienable rights of this group of young adults to keep and bear arms, the age group targeted is pushing back.  Despite the Supreme Court – the court anti-constitutionalists love to interpret their rulings as law – upholding the God-given individual unalienable right to keep and bear arms, the State of Florida enacted a new law that conflicts with this ruling by the Supreme Court.  This is how anti-constitutionalists play the game of “having their cake and wanting to eat it too.”

Moreover, this information comes on the heels of the massive school board and teacher union supported walkout of students in support of gun grabbing.

According to the Conservative Tribune:

The Second Amendment Foundation isn’t the only gun rights group reporting renewed interest since the country’s latest bout of anti-gun insanity began, though.

According to Time magazine, gun rights groups and shooting organizations have reported a rise in membership since the Feb. 14 shootings in Parkland.

The National Rifle Association keeps its membership information private, but Time reported that two sources familiar with the group’s data said membership and donations have risen even as the NRA has been demonized by the mainstream media and Democrat Party.

David Hogg and the other Parkland darlings have all done their share of attacking the NRA too (this bit on CNN on Monday was a good example), pretending to speak for all the nation’s young people in wanting to dismantle a constitutionally guaranteed right.

But the numbers of 18- to 20-year-olds contacting the Second Amendment Foundation tell a different story:

The anti-gun campaign is blowing up in their faces.

Gottlieb stated, “While the media has paraded high school students to push a gun control agenda, the age group that is now being targeted by that effort is energizing, and showing that there is another side to this controversy.”

Here is an example of someone claiming to support the Constitution arguing in support of banning certain weapons and being almost oblivious to what is occurring in many States.

“No one is saying that the people can’t keep and bear arms.  We are just saying there are certain types of arms that people just shouldn’t have.  No one needs an automatic weapon for defense or hunting.“

This adult friend has watched the reports of the lame-stream enemedia engaging in a false narrative concerning firearms while portraying these shooting survivor teenagers as “experts.”  As every argument she gave was countered, she eventually decided she didn’t want to discuss the issue anymore.  This is typical behavior for individuals who support infringing on the Second Amendment.  Moreover, when pointing out her view is anti-constitutionalist, supportive of progressive socialist ideology, and in violation of God’s word, she decided she had something pressing to do.

Despite the extreme push of the lamestream enemedia to portray Hogg and his group as representative of the age group being discriminated against, the increase in these individuals contacting the Second Amendment Foundation tells a different story – a story one is not going to get from Hogg or the lamestream enemedia.  As teachers, their union and the school board supported students from elementary to high school walking out in advocacy for people control and confiscation, another group of individuals quietly mobilized in support of the right of the people to keep and bear arms without being infringed upon by government.

Ben Shapiro of the Daily Wire received hundreds of email from students who do not support Hogg’s group’s position asking for advice on what do to regarding the walkout because these students are facing castigation from their peers for holding an alternative viewpoint.  The appropriate content begins at around 8:40 in the video.  The lamestream enemedia refuses to cover these students since their viewpoint doesn’t go along with the political agenda the biased, propaganda based media pushes.

Young adults and high school students standing in support of the right to keep and bear arms are coming out to voice their concern over the people control agenda of gun control.  These individuals need support in the face of peer pressure to “conform” or face bullying for their views.  If the lamestream enemedia won’t give these young people a platform, the alternative media absolutely should and is.  It’s another example of the lamestream enemedia propaganda and attempts at “brainwashing” the public, including our school-age children, into accepting their gun-grabbing agenda as the only one and the majority one or face repercussions.