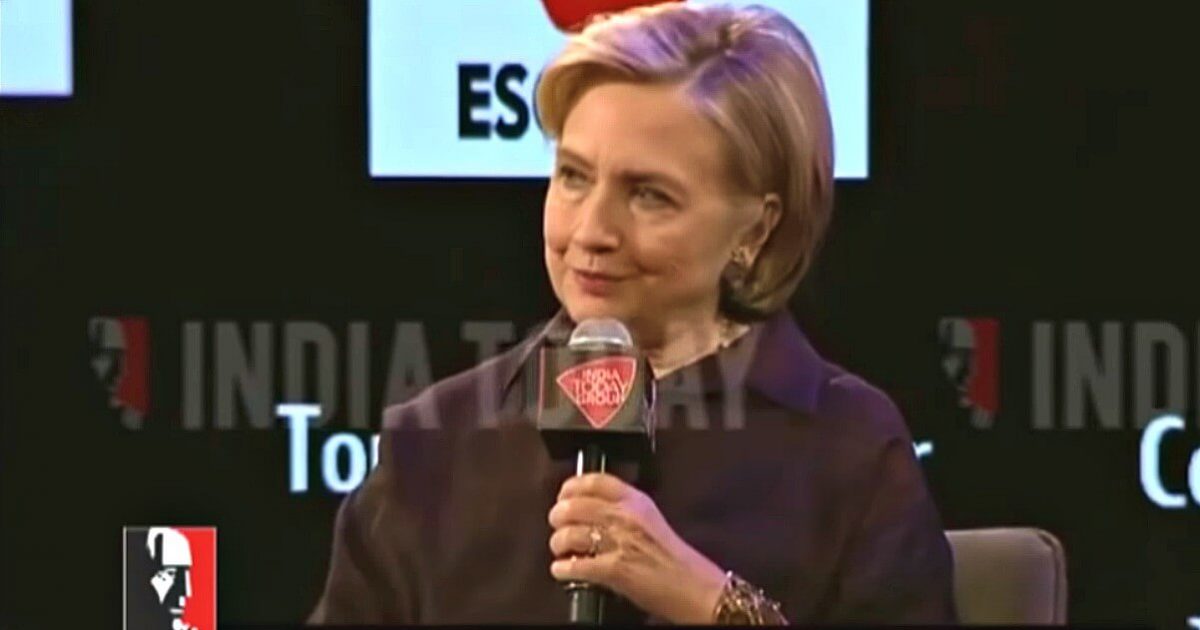 This is not shocking, is it?

I mean, no one is surprised that Hillary Clinton is as tone-deaf, prideful, and idiotic as she’s always been… are we?

The only thing that is surprising is that she allowed her mask to drop long enough to be heard being as honest as she was.

This past week, the failed Democrat candidate for President was traveling through India when she explained to a crowd of listeners the “real reason” that she lost the election.

As she tells it, her voters are “optimistic, diverse, dynamic” people… but those kind of voters are simply outnumbered by backwards, racist, misogynists who really don’t like Indian-Americans. And those kind of people voted for Trump.

Here’s her direct quote, and as you read it, please consider what it means that liberals believe this about America:

“There’s all that red in the middle, where Trump won. Now, I win the coasts, I win Illinois, Minnesota, places like that. But what the map doesn’t show you is that I won the places that represent two-thirds of America’s gross domestic product. So I won the places that are optimistic, diverse, dynamic, moving forward, and his whole campaign, Make America Great Again, was looking backwards. “You don’t like black people getting rights, you don’t like women getting jobs, you don’t want to see that Indian-American succeeding more than you are, whatever your problem is, I’m going to solve it.”

If you simply can’t believe that Hillary Clinton would say such horrible things about half of America, here’s the video so you can see it with your own eyes.

Jonah Goldberg explains just how wrong everything Hillary said was:

So, what’s wrong with what she said? Well, nearly everything, starting with the fact that she probably believes all of it. It shows that she really doesn’t like large swathes of the country. She has a Manichaean view that says people who voted against her are backward, racist, sexist, and kind of dumb. I didn’t love the slogan “Make America Great Again,” and Lord knows I didn’t like Trump’s campaign style. But for millions of decent Americans, Trump’s program was optimistic. “We’re gonna make America great again” may sound unequivocally racist to the race-obsessed, but that’s not how everyone who liked it heard it. How easy and comfortable it must be to think that anyone who voted against you is against “black people getting rights.”

Goldberg then dissects the real hypocrisy in Hillary’s arguments:

Now, I’m sure some liberals think everything she said is true — a sad commentary in itself — but even those liberals should understand how politically absurd all of this is, particularly coming after Hillary’s endless lists of other reasons why she lost. Her vision of America is a mirror version of the liberal caricature of the conservative vision, just as divisive, bigoted, and, ultimately, as arrogant.

Which brings me to this:

We do not do well with white men and we don’t do well with married, white women. And part of that is an identification with the Republican Party, and a sort of ongoing pressure to vote the way that your husband, your boss, your son, whoever, believes you should.

According to this theory, Hillary Clinton is the champion of women — but only women smart enough to recognize their interests or strong enough to defy the patriarchy. This is a pristine example of the lazy false-consciousness narrative that informs so much of feminism. It can’t possibly be the case that women agree with their husbands — or that their husbands agree with them. I mean, sometimes people who share a worldview marry each other. You either agree with — and ultimately love — Hillary or you figuratively toil in the fields in your Handmaid’s Tale habit.

This is the reality of many of the arguments that leftists make today. They argue on one hand that the traditional, white, male hegemony is oppressing people of color, women, and those who live un-traditional lifestyles. However, they make these declarations from a place of psuedo-leadership, acting as a voice for huge swaths of the population that may or may not agree with their arguments. In fact, when someone in these groups steps out of line to disagree they are immediately cast aside as an “Uncle Tom” or “brainwashed” token who is simply being used by those of us on the right.

It’s not just Hillary Clinton, either. Here’s New York City’s communist mayor, Bill de Blasio, making a similar argument during the “I am a Muslim Too” rally in New York last year. During his speech, de Blasio argued that Trump’s immigration policies were racist and bigoted, and so to were his supporters. So the civilized, cultured, and metropolitan folks living in New York City would show the people in Middle America just how wrong they are by holding this rally and showing their beautiful signs.

“We are here to show middle America our beautiful signs and, through our beautiful actions and intentions, that they have been misled,” he said. “They’ll see our rally; they’ll question their government.”

It’s incredibly offensive, and yet this is the narrative that the left advances every single day.

If the left is right, then the mass of humanity is filled with imbeciles and only a few, educated leftists are wise enough to make decisions for us.

This is seriously what they believe. Which is why they fight to outlaw MSG, sugar, tobacco, vaping, and other habits that they find unseemly. The average person isn’t smart enough to care for themselves, so the almighty leftist Big Brother must do it for them.

The left doesn’t want to “lead” America into the future, they want to rule over a perpetual servant class that relies on their handouts for all of life’s needs and wants.