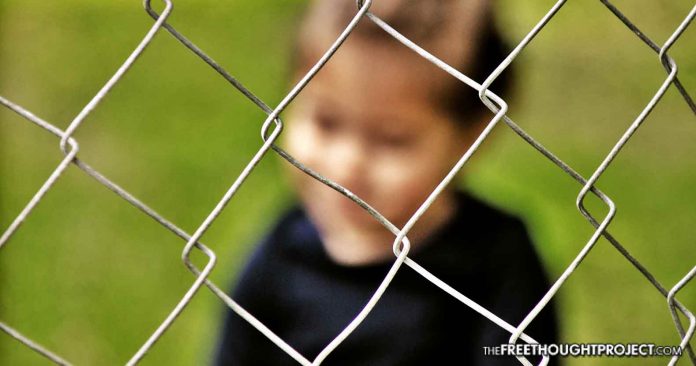 As the Free Thought Project reported earlier this month, a jaw-dropping independent investigation has revealed that hundreds of children, some as young as 11-years-old, are estimated to have been drugged, beaten, and raped over the last several decades in a single town. According to the investigation, the abuse was allowed and is continued to be allowed because authorities look the other way. Now, TFTP has confirmed that this is indeed the case.

The investigation claims that allegations dating back to the 1980s were mishandled by authorities, who repeatedly failed to punish a network of abusers, according to the Telegraph.

According to a new report, it appears police were told from within their own department—via an internal memo—claiming that “in most cases the sex is consensual.”

Countless victims and former victims have come forward detailing their abuse and the current abuse taking place in the British town of Telford. Despite hundreds of testimonies and graphic details, police have failed to act as they hide behind the idea that a child can somehow consent to sex with an adult.

The report found that West Mercia Police sent the memo out a year after the ostensible “investigation” into the ongoing child sexual exploitation in Telford. The memo determined that the children, who were being severely abused, were working as prostitutes.

“Gangs and their child abusing ‘customers’ that groom, rape and pimp out girls under 16 are rapists. If the police do not know this they are not fit for purpose.”

Telford Police memo on children consenting to abuse is despicable. The UK age of consent is 16. Gangs and their child abusing 'customers' that groom, rape and pimp out girls under 16 are rapists. If the police do not know this they are not fit for purpose. https://t.co/P0mwL7XkYz

In what is being referred to as “Britain’s biggest ever child abuse scandal,” the evidence is so damning that Lucy Allan, the Conservative MP for Telford, has called for an inquiry into child sexual exploitation. According to the Telegraph, Allan calls the latest reports “extremely serious and shocking.”

This is the second time Allan has called for such an investigation.

“There must now be an independent inquiry into child sexual exploitation in Telford so that our community can have absolute confidence in the authorities,” she told the Sunday Mirror.

Also lashing out at the memo is child abuse lawyer Dino Nocivelli, who said, “The authorities just don’t seem to get it. Children cannot agree to sex.

“Just because a child is not being physically forced to carry out sexual acts, it doesn’t mean they consented.

“Many of these children will have been groomed and manipulated by their abusers and would have been threatened to keep silent. How can you say an 11-year-old is capable of consenting to sex with a 40-year-old? This is rape.”

The release of the memo follows a statement from Telford police chief Tom Harding who claims that the abuse scandal is being “sensationalized,” and that he “significantly disputed” claims of the 1,000 children.

It is likely for this reason, according to the victims, that they have very little confidence in the authorities as they have looked the other way for the last four decades.

As the Telegraph reports:

The investigation claims that allegations dating back to the 1980s were mishandled by authorities in Telford, who repeatedly failed to punish a network of abusers. Victims claimed that similar abuse, which has been linked to three murders and two other deaths, has continued in the area.

According to the investigation, social workers were aware of the abuse in the 90’s and did nothing to stop it. Furthermore, police allowed the abuse to continue for more than a decade before they launched Operation Chalice which looked into child prostitution in Telford but only led to the arrests of a handful of men.

The abuse continued because government officials considered the sex-trafficked children “prostitutes” so they didn’t care about them. When asked why they didn’t keep details of the abusers, the council allegedly claimed that they did not want to be accused of racism.

It is also claimed that abused and trafficked children were considered “prostitutes” by council staff, that authorities did not keep details of abusers from Asian communities for fear of being accused of “racism” and that police failed to investigate one recent case five times until an MP intervened.

“These children were treated as sexual commodities by men who inflicted despicable acts of abuse. The survivors deserve an inquiry,” Nocivelli said. “They need to know how abuse took place for so long and why so many perpetrators have never been brought to justice.”

A dozen victims spoke with the paper and accused more than 70 abusers. A 14-year-old girl detailed her abuse, describing how she became pregnant twice as she was being trafficked and forced to have abortions.

“Hours after my second termination, I was taken by one of my abusers to be raped by more men”, she said.

“Night after night, I was forced to have sex with multiple men in disgusting takeaways and filthy houses. I must have been getting the morning after pill from a local clinic at least twice a week but no one asked any questions.

“I was told that if I said a word to anyone they’d come for my little sisters and tell my mum I was a prostitute.”

Child trafficking and abuse in the United Kingdom is a horrifyingly common practice. As TFTP has reported on numerous occasions, authorities are either ignoring most of it, or, they are complicit in the abuse. This case shows that they are not at all interested in stopping it.

Nathan Ryding, the Chairman of Young Independence, said: “That is utter nonsense and I am appalled that those comments have come from the police. These girls were below the age of consent, meaning just that, they can’t give consent!

“Absolutely disgusting attitude towards a case so sensitive. Actions like these are part of the many reasons why the public don’t trust the police.”