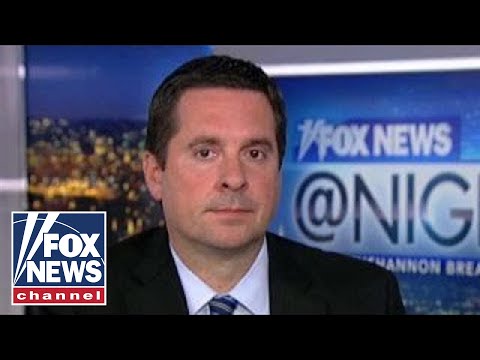 Beginning at the 5:20 mark in the video below, Congressman Nunes upbraided the “friends of the Democrats in the mainstream media”. Referring specifically to the New York Times, Nunes said the newspaper’s reporters “are heavily funded by Democratic Super PACs,” which the Times “should have disclosed”.

On March 12, 2018, after a 14-month investigation and who knows how much in taxpayer dollars, the House Permanent Select Committee on Intelligence announced that they had completed their Russia investigation and found no evidence of collusion, coordination or conspiracy between the Trump campaign and the Russians.

“We didn’t find any evidence of collusion and I don’t think [special counsel Robert Mueller] will either.”

“After more than a year, the Committee has finished its Russia investigation and will now work on completing our report. I’d like to thank Congressmen Trey Gowdy, Tom Rooney, and especially Mike Conaway for the excellent job they’ve done leading this investigation. I’d also like to recognize the hard work undertaken by our other Committee members as well as our staff. Once the Committee’s final report is issued, we hope our findings and recommendations will be useful for improving security and integrity for the 2018 midterm elections.”

Sessions said in a statement that investigators “concluded that Mr. McCabe had made an unauthorized disclosure to the news media and lacked candor — including under oath — on multiple occasions.”

As Deputy Director of the FBI, Andrew McCabe signed a FISA (Foreign Intelligence Surveillance Act) order, requesting the FISA Court to authorize electronic surveillance on Carter Page, a Trump campaign volunteer. The FISA orders were made under false pretenses because material and relevant information was omitted.

See “FISA Memo in text format. Lock them up!”

Devin Nunes, 44, is a farmer who became a politician, having grown up on his family farm in Tulares County in California’s Central Valley. His grandparents were immigrants from the Azores, a tiny group of islands more than 800 miles off the coast of Portugal.

Nunes has a Master’s degree in agriculture from Cal Poly. When he was 14 years old, he became an entrepreneur when he bought seven heads of young cattle. He once said, “I never pictured myself running for office. I always wanted to be a winemaker and make cheese, that sort of thing.” (See “The Devin Nunes You Don’t Know“)

Nunes is that rare politician who has not sought to exploit his public office for financial gain.