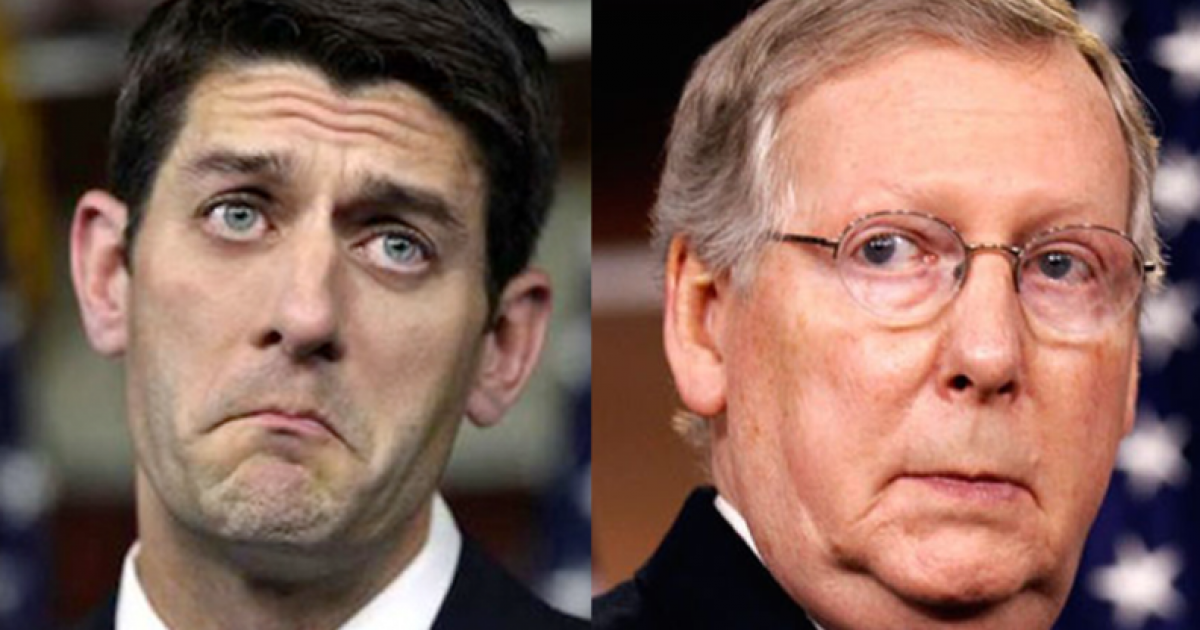 If there is any lesson that the citizens of this republic should learn and learn fast, it is that Republicans are no better than Democrats.  Moreover, citizens of this republic need to ditch the “R”/”D” faction mentality, the left/right paradigm, the “us” versus “them” mindset, the “conservative”/progressive (liberal) platform, and the victim/oppressor rhetoric and begin to look at things from the constitution/anti-constitution standpoint.  If you are not supporting, upholding, protecting and defending the constitution, then you are tearing it down;  in essence, you are being an anti-constitutionalist.  Until we rid ourselves of these “faction” labels, politicians will continue to give the American public the shaft, which Republicans are set to do, once again, in the upcoming omnibus bill lawmakers must agree upon before March 23, 2018.

Republican leadership is going to fund sanctuary cities in the must-pass spending bill next week, giving Democrats a huge victory while simultaneously undercutting conservatives who put them in power, a senior GOP aide told The Daily Caller News Foundation.

According to the unnamed senior GOP aide, “House and Senate leadership has rolled over and played dead on border security. When it comes to a border wall, they say it is not our problem. When it comes to funding sanctuary cities, they say it is not our problem. What they are essentially saying is we are going to pass bills with more Democrats than Republicans.  This is a sign to administration that leadership doesn’t care what the White House wants. Even though GOP members ran on these issues. Conservatives mean it. The administration means it.”

The White House is arguably more serious about immigration policy than any other campaign promise President Donald Trump made in 2016.

Within his first few weeks in office, Trump signed an executive order in January 2017 to strip federal grants from cities that harbor illegal immigrants. A federal judge blocked the president’s move that November, arguing that the administration did not have the legal authority to cut funding that Congress had already appropriated. The battle between the administration and federal courts is still ongoing, but Congress has the means to end the debate, given that it has the “power of the purse.”

Conservatives in Congress, along with administration officials, are currently lobbying leadership to stop funding sanctuary cities. The argument is if Congress stops appropriating the money for these federal grants in the spending bill, the court’s claim is undercut and the administration and Republicans could claim a victory.

The government shelled out roughly $27 billion in federal grants in 2016 alone, according to American Transparency.

“I’m calling on Congress to stop funding sanctuary cities so we can save American lives. The funding bill should not give precious and massive taxpayer grants to cities aiding and abetting criminals,” Trump said at the rally for failed Republican congressional candidate Rick Saccone. “It’s what they do.”

It isn’t just the funding of sanctuary cities and the failure to address construction of the southern border wall that will ruffle the feathers of the voting base that propelled Trump to the presidency.  An unnamed GOP aide claimed that the draft of the spending bill, being kept under “lock and key,” contains funding for Planned Parenthood, Obamacare subsidies payouts, a large tax on sales conducted over the internet, gun control legislation, and a myriad of other policies completely opposite of the campaign platforms Republicans peddled to the public.

David Bozell, president of the national grassroots conservative organization ForAmerica, stated, “This is why guys like Rick Saccone lose. The expectations for Republicans to maintain control ought to be very low. Republicans want to run on this platform of tax cuts and ‘my name is not Nancy (Pelosi)’.  How much currency does the ‘we aren’t Pelosi’ have any more? This is not 2012. These are base races. You have to have your base energized for you, and giving Democrats everything they want is going to keep base voters at home.”

This is not a lame duck session of Congress where the President is of a different party than both chambers of Congress.  Republicans hold majorities in both chambers.  However, if you remember the 2016 presidential election cycle, many of these Republicans, holding seats in the House and Senate, vowed to “stump Trump” with many espousing the moniker “Never Trumpers.”  Those that were up for re-election ran on many of the same campaign platforms as Donald Trump because they saw the reception “The Donald” received from the public.  And, of course, there are the RINOs who claim Republican status while being closet Democrats.

Now, right before the mid-term elections in 2018, these incumbents are going to shaft the American public, just as they did during the Hussein Soetoro era, when begging for majorities in both chambers of Congress then failing to deliver as they played the blame game.

What are these charlatans going to blame this time?

Probably use the same old excuses – Democrats wouldn’t support a bill without concessions;  we didn’t have the votes because some Republicans would not support the bill we really wanted;  to get what the president wanted we had to compromise;  we had a good bill but couldn’t get it past the Senate;  yada, yada, yada.

Did anyone record all the excuses under the Obama administration these charlatans used?  We will see them again this time with some variations on the theme.

Bozell told the DCNF, “There is nothing preventing Republicans from being on offense on all of the key issues, like immigration, Obamacare, Planned Parenthood — all of them.  You are talking about trillions of dollars that our representatives are spending under the cover of darkness. Their number one responsibility is to be stewards of taxpayer dollars.”

This is the crux of the issue – the House is the “steward of taxpayer dollars.”  Yet, time and again, the House refuses to use the power of the purse appropriately, which is contained in the Constitution for the united States of America.  Congress has the power to legislate immigration law, which it has done.  No money should be going to sanctuary cities or States nor any that are not since nowhere in the Constitution is Congress authorized to provide money to States or cities.

Likewise, the Constitution does not authorize Congress to fund Planned Parenthood and it definitely provides no authority for health care insurance or subsidies for the premiums and insurance companies.  Most importantly, Congress has zero authorization to enact legislation that infringes upon the right of the people to keep and bear arms.

Congress holds the authorization to protect the people of this republic from invasion, which it has failed to do through promotion of open US borders.  Part of the authorized duty to protect the States from invasion is strictly enforcing immigration law and securing the border with a sound, solid, border wall that can’t be scaled or tunneled under easily.

When the government fails to protect the people from invasion, the States may act when in imminent danger that will not permit delay;  however, the Congress has balked at States trying to do that.  One could say with the element crossing the border into the border States and the numerous crimes that are committed by this element, the States are in imminent danger.  But, Congress is too busy with investigating false dossiers on Trump/Russia collusion, playing “dialing for dollars,” promoting the murder of babies in the womb, engaging in insider trading, and legislating plants to be bothered with important constitutional business.

As expected, neither Speaker Ryan nor Senate Majority McConnell’s office responded to requests for statements by the DCNF.  That is predictable from House and Senate leadership when caught violating the American public.  Although, by this time, the public should be expecting this type of behavior from the factions, who are out for themselves and occupy the Swamp.

The Swamp that is Washington, DC, is infested with more different species of fungus than the Okeefenokee, when looking at all the different factions within the two main factions.

There will be citizens of this republic who cannot even consider voting along any line except the “party line.”  It would cause extreme cognitive dissonance, rendering these individuals unable to function.

However, if this republic is to regain its glory days of limited government;  government for the people, by the people and of the people, citizens need to ditch the “faction” mindset across every line and think in terms of the Constitution, the supreme law of the land.

So far, voting for liars, cheats, criminals and charlatans in either party has gotten the citizens nowhere.

In fact, the citizens of this republic have consistently lost God-given individual unalienable rights because of encroachments by both parties who view the Constitution more as a suggestion instead of law.

Put simply, Democrats and Republicans are both vile, regardless of which party controls the White House;  but, particularly so when the occupant gains favor from the people.

Isn’t it about time we, as citizens, choose the Constitution and select our representatives using that measuring stick?  Isn’t it time to ditch the parties and the lamestream enemedia propaganda to choose good men to serve as our representatives?  And, shouldn’t we return the Senate to the purview of the States?

It’s something to think about.