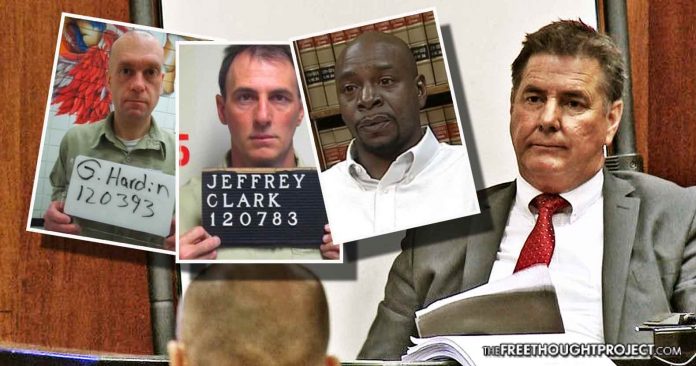 Louisville, Kentucky – Three innocent men have been released from prison after serving a combined total of more than 50 years for crimes they did not commit, and they all have one thing in common—a homicide detective who they blame for their wrongful convictions.

Edwin Chandler spent nine years in prison after he was convicted of shooting and killing store clerk Brenda Whitfield during a robbery in 1993. However, he was exonerated in 2010 after it was determined that another man, who was already serving 20 years on an unrelated assault charge, was responsible for the robbery and the murder.

Chandler sued the city of Louisville and the police department and received $8.5 million in damages. However, the officer who he blames for forcing him to give a false confession faced no repercussions.

Standing before the Metro City Council, Chandler shared his story and called for a new investigation into the actions of former Louisville Police Detective Mark Handy, according to a report from WDRB News.

Chandler said despite the fact that he spent nearly a decade in prison for a crime he did not commit, he has nothing against police, and he simply wants to raise awareness about “one individual who needs to be held accountable for his actions.”

“Mr. Handy has not been brought to justice for any of the wrongdoing that he’s done,” Chandler said.

Retired LMPD detective Denny Butler testified on Chandler’s behalf and accused Handy of threatening Chandler because he knew Chandler was innocent. “So to sum it up, Mark Handy tried to execute Edwin Chandler using our criminal justice system, knowing he was an innocent man,” Butler said.

The former detective also said that Chandler was not the only victim, and there were multiple other cases where Handy was responsible for innocent men being wrongfully convicted. “If you remove Mark Handy from those cases, these guys don’t even get charged,” he said.

Jeffrey Clark was also present at the meeting, and he said Detective Handy was the one who interrogated him and Keith Hardin when they were accused of murdering Rhona Sue Wardord in 1992.

Both Clark and Hardin spent 22 years in prison after they were convicted of murdering Wardord during a satanic ritual. However, they were set free last month after “new DNA evidence and accusations that investigators framed the pair led the Kentucky Supreme Court to vacate the convictions.”

“I would like to see him in the general population of a prison so he can understand what it’s like,” Clark told WDRB at the council meeting.

In another case from 1992, Keith West was convicted of murder in the shooting deaths of Kevin Harraway and Gerald White. He admitted to killing both men but claimed that he opened fire in self-defense because the men attempted to kidnap him with plans to sodomize him. Despite the fact that there was evidence to support his story, the evidence was never considered, and he faced the death penalty.

Handy was the main homicide detective in the case, and after West’s conviction was overturned, the Supreme Court of Kentucky admitted in court documents that Handy intentionally lied under oath in the case.

“While involved in another investigation in 1992, it is undisputed that Handy erased an eyewitness’ initial taped statement and recorded over it with a second statement,” the document stated. “When testifying under oath in that case, however, Handy stated that he did not erase or copy over any case.”

In addition to playing a central role in four murder convictions that have since been overturned, Handy’s record includes accusations of other abuses of power—yet he never faced consequences for any of his actions.

While Handy was allowed to quietly retire from the Jefferson County Sheriff’s office, the testimonies from men who spent decades of their lives in prison because of his manipulation and abuse have persuaded the Metro Council Public Safety Committee to pass a resolution that will request a new investigation into the actions of former Detective Mark Handy.