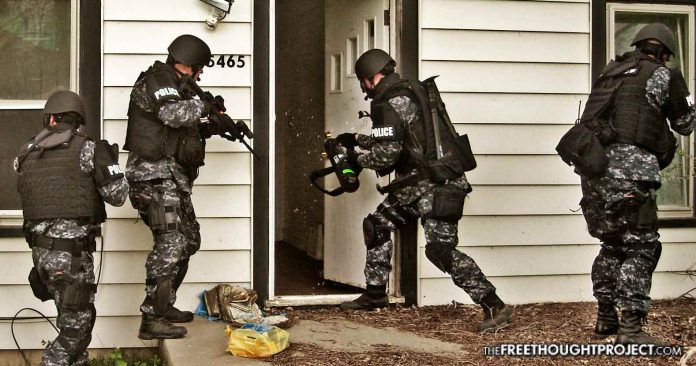 Broward, FL — In what’s being called the first gun confiscation of its kind in Florida, police have taken four guns and a couple hundred rounds of ammunition from a 56-year-old Lighthouse Point man. The man was not tried, had not committed a crime, and the guns were solely removed because “experts” deemed him a threat.

The guns and ammunition have been temporarily removed from the man under the state’s new “risk protection” law, which is also sometimes called “red flag” legislation, Lighthouse Point City Attorney Michael Cirullo confirmed, according to the Sun-Sentinal.

“We know it’s the first case of its kind in Broward County and we think it’s the first one in Florida, under the new law,” Cirullo said. “Up until the introduction of this law last week, there was no process for us to protect the public in this kind of situation.”

In Florida, prior to passing the new gun control law, people deemed psychologically unfit could be

Although the 56-year-old man was subsequently Baker Act-ed, his guns were taken before this happened.

To illustrate the insidious nature of Florida’s new bill and its rights-violating implications, prior to the new legislation, if police would have done what they did to this 56-year-old man—taken his guns with no due process—they would be fired and fined up to $5,000.

It is important to note that this man was certainly acting strangely and, according to the Sun-Sentinal, he told officers he “was being targeted and burglarized by the Federal Bureau of Investigation and a neighbor who lives in (his) building,” the judge wrote in his order. “(He) could not describe the neighbor but stated that the neighbor ‘shape shift, he can change heights and I’m not sure where he comes from’ and ‘to be honest, he looks like Osama Bin Laden.’”

He also turned off all of his power to the apartment he lived in. By all means, he was acting very strangely. However, he still deserved due process.

involuntarily hospitalized under what is called the Baker Act. During this involuntary admission to a hospital, the person is evaluated to determine if they are a risk to themselves or others.

Only after they had been psychologically evaluated and deemed a threat could the government then move in to temporarily disarm them. Now, however, this tiny bit of due process is no longer necessary and “experts” can simply deem someone a threat and take their guns.

It will now be up to the man to prove that he is healthy enough to ever be able to get his guns back again.

This law was a reaction to the shooting in Parkland, however, it is important to point out that there were already laws on the books that should’ve stopped Nikolas Cruz from ever getting a gun. Citing Cruz as the reason for advocating the removal of due process, the anti-gun activists are claiming he should’ve had his guns taken which would have prevented the tragedy. Sadly, however, they are ignoring the fact that he was accused of multiple felonies—and should’ve never been able to purchase a gun in the first place—but law enforcement failed to act on any of it.

In Florida, if a person making death threats intends for the victim to fear for her safety, specifically fearful of death or bodily harm, it is considered a credible threat under the law, which changes the crime from stalking, a first-degree misdemeanor, to aggravated stalking, a felony of the third degree. Cruz was reported at least 4 times for this very crime before he bought his AR-15 and police did nothing.

Florida’s law also mirrors another due process-removing law that was recently used in Washington state to remove a man’s guns.

As TFTP reported earlier this month, there is a law on the books known as the Extreme Risk Protection Order or ERPO, which went into effect in June of 2017. This law is used when a person is considered an “extreme” threat as reported by police and family members. An ERPO must be approved by a judge and only after this person is proven to be a danger to themselves or others can police move in to confiscate their weapons.

“We now have to go to someone’s house and knock on the door and say, ‘We’re from the government. Can we have your guns?’” Seattle police Sgt. Eric Pisconski told KIRO Radio’s Dave Ross. “That can get very dangerous.”

While touted as a necessary tool for police, an ERPO and Florida’s new law both remove due process as the person who is accused of being mentally unstable does not have to be present and gets no chance of facing their accuser.

To those who may be in favor of such laws, consider the following: There is no way to stop an estranged spouse from call police repeatedly and telling them their ex is threatening to cause harm to others. While the man in Florida had his guns taken for being psychologically unfit, the man in Seattle simply open-carried a pistol and looked out of windows and his guns were taken because his neighbors thought it was strange.

Anyone, any time, now has the ability to claim someone else is a threat and have police take their guns. One does not need to delve into the multiple ‘what if’ scenarios to see what sort of ominous implications arise from such a practice. What’s more, police now have the power to deem you a threat at any time and legally disarm you—due process be damned.

This is the exact scenario that Donald Trump advocated for in February. Last month, notorious gun-grabber Senator Dianne Feinstein, sat next to Donald Trump and likely salivated over his remarks as he called for the removal of due process and to “take the guns first.” Now, police are doing just that.

To those that support the removal of due process under the ostensible notion that it would make you safer, you would do well to remember history before you or someone you know finds yourself subject to these very laws.