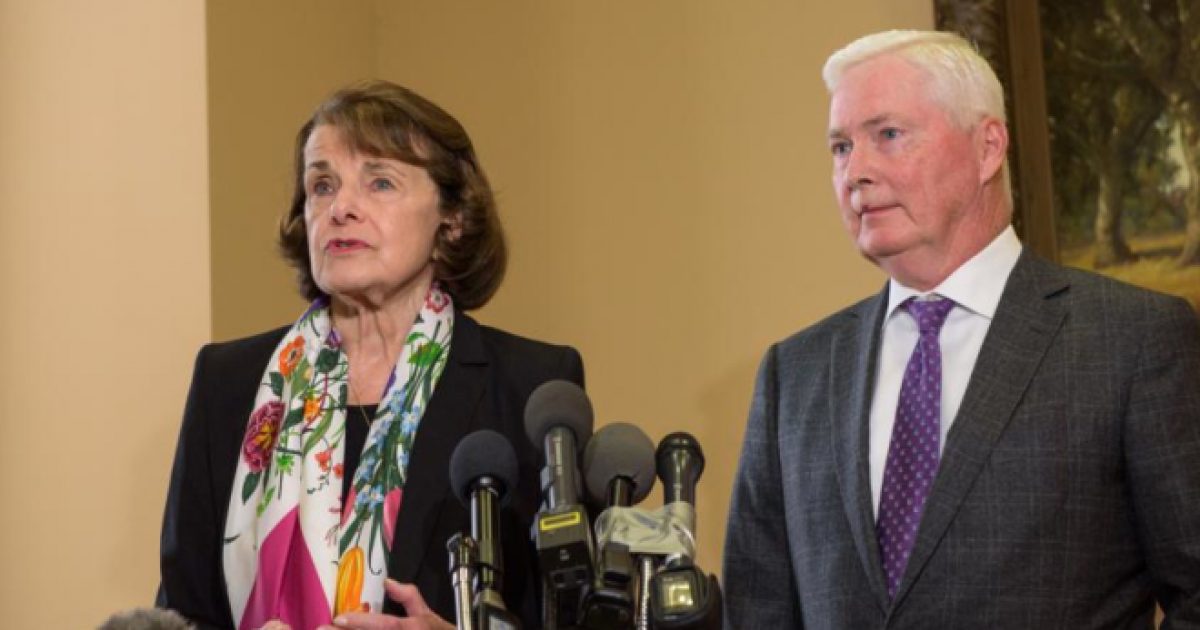 Can we expect anything less from a Communist gun grabber like Senator Dianne Feinstein (D-CA)?

“I was delighted to meet Ed Stack, who I think is a great American,” Feinstein said. “He’s a supporter of the Second Amendment and a gun owner, but also understands that we need reasonable controls on who can buy guns and what guns they can buy.”

Back in February, Dick’s changed their policies following the alleged Parkland, Florida school shooting.  This, in Feinstein’s opinion, makes him a “great American.”Beginning today, DICK’S Sporting Goods is committed to the following:

At the same time, we implore our elected officials to enact common sense gun reform and pass the following regulations:

“Some will say these steps can’t guarantee tragedies like Parkland will never happen again. They may be correct – but if common sense reform is enacted and even one life is saved, it will have been worth it,” Stack said.

Well, it is correct that this won’t stop any crimes.  It’s not a “may be correct.”  It is correct.  There is no “common sense reform” when it comes to arms nor the Second Amendment.

However, notice the hypocrisy here.  Stack gives the standard Democrat, gun grabbing, Communist line when it comes to these “reforms.”  He talks about saving just one life.  Well, I would then expect to see Mr. Stack leading the charge on the abolition of abortion in the US.  I would expect to hear him put his full support behind someone like Oklahoma gubernatorila candidate Dan Fisher.  But I won’t hold my breath because that would mean he would have to go against his agenda and actually do something that would actually save lives, not simply provide a feel good, do nothing smatter of policy changes and words.

This is not being a great American.  It’s being anti-American because it is against the founding principles and our Constitution.

Not only is Stack dishonest, but he is criminally minded in promoting such an agenda.

Now, frankly, I wish we didn’t have discrimination laws, as people should be free to sell or not sell their goods or services to anyone they choose.  This is most apparent when one understands the idea of the protections of the First Amendment that people may peacefully assemble together.  When that is expounded, then you come into the free market and people are free to discriminate against whomever they choose.

As I’ve stated previously, Dick’s is an overpriced retail outlet.  In my opinion, people who go there aren’t looking for deals in the first place.  Perhaps it’s some sort of social status that takes them there or something else.

However, for Dick’s to be promoting a political agenda seems to me to be out of sorts for a company, especially when it’s an anti-American agenda.

Perhaps the American people, the real great Americans who uphold the Constitution, will see this clear display from a Capitalist acting like a Communist and decide not to be a patron at Dick’s ever again.  I never darken their doors, and I won’t ever in the future.

They demonstrated their political correctness after Sandy Hook by hiding the Bushmaster AR-15 on their website, but continued to sell it.  Hypocrites!

Well, I’m sure that by depleting their inventory of guns, it hasn’t stopped competitors from selling and making a significant profit while those who own stock in Dick’s are losing.

Dick’s, as well as Wal-Mart, are already facing several lawsuits for their discriminatory policies for failing to sell rifles to those of legal age.  Kroger is also facing similar action.