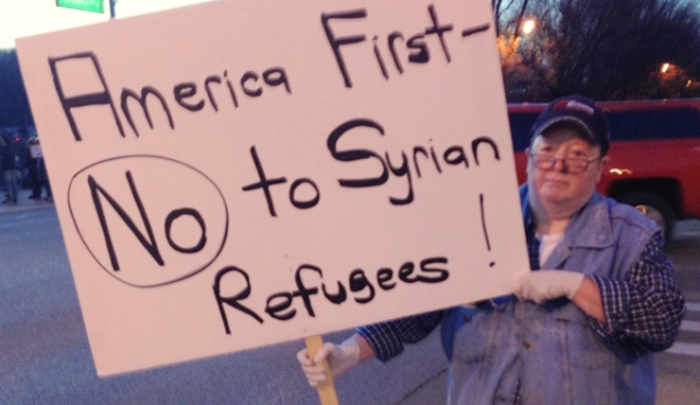 This is chilling, but not surprising. “Fusion centers were established a few years after the 9/11 terror attacks by the George W. Bush administration and expanded under Barack Obama.”

Obama. That explains it. These Fusion Centers harassing patriots for opposing the spread of mosques with ties to groups such as Hamas-CAIR were expanded under Obama. They’re part of the anti-American, anti-democracy deep state that has been and is still working so hard to undermine and destroy President Trump. And clearly they also want to clear away and destroy all resistance to jihad terror and islamization. This is another swamp that is in dire need of draining. The U.S. government has no business harassing law-abiding citizens. This has to stop.

Brenda Arthur received an unexpected visit on March 8 that, one week later, leaves her feeling more than a little uneasy.

At her door that day was an officer with the West Virginia State Police. He wanted to know about her involvement in a Freedom of Information request regarding a local mosque.

Arthur, who will turn 67 this summer, serves as leader of the West Virginia chapter of ACT For America, whose mission is to educate Americans about the advancement of Islamic principles in Western societies.

As a Jewish American, she was concerned about a major expansion of the Islamic Association of West Virginia in her hometown of South Charleston. This mosque has hosted an openly anti-Semitic preacher in the past, and so she went to city hall in late January to have a look at its construction permits and site plans, something that is within the right of every American citizen under the U.S. Freedom of Information Act and state open-records laws.

She had no idea that this perfectly legal activity, performed every day by citizen watchdogs across the U.S., would prompt a visit from the state police.

Arthur was not available to answer the door when Sgt. R.C. Workman came knocking, but Workman left his business card with a hand-written note on the back:

Workman’s unit is part of the West Virginia Intelligence Exchange, a secretive outfit that works closely with the U.S. Department of Homeland Security’s “intelligence fusion center” in West Virginia.

All 50 states have at least one DHS fusion center, and the story of Brenda Arthur lends credence to the views of civil libertarians that these centers, whatever their stated purpose, have been weaponized against law-abiding American citizens.

Fusion centers were established a few years after the 9/11 terror attacks by the George W. Bush administration and expanded under Barack Obama.

The West Virginia Fusion Center website says its mission is to “Embrace proactive intelligence efforts. Those efforts are key to inhibiting criminal networks, whether those groups are terrorists, drug-related groups, organized crime, or other criminal enterprises.”

But what is it about Brenda Arthur that could garner the attention of this specialized police unit? She seems like an unlikely candidate to be involved in terrorism or organized crime.

Arthur is a senior citizen who’s never broken a law in her life. She is a professional insurance broker, a great-aunt to six children, one of whom she helps with financial support for a private education at a Montessori school.

“The word mosque, it’s key words like that. If you don’t like mosques, they’re gonna be after you, they’re watching you, because everything is determined by algorithms,” said Whitehead, founder of the Charlottesville, Va.-based Rutherford Institute.

Being an “activist” also draws the attention of the fusion centers, he said.

‘Do not talk to them’

Whitehead has strict advice for any law-abiding citizen who is approached by law enforcement asking questions about their personal activities.

Whitehead said the intimidation tactics used by fusion centers are similar to the East German Stasi and other secret-police agencies.

“They’re copying the tactics of former totalitarian regimes and the slightest mistake can get you in trouble,” he said. “That’s why you shouldn’t talk to them. The threat assessments are very dangerous. Don’t talk to them. Call someone like us, let us issue one of our letters and that usually shuts them up, and also puts them on record.”

“Once you’re in their system,” Whitehead added, “you cannot get out.”

Arthur was typical in that she was caught off guard by the visit.

“So I called him at the number he gave me and asked ‘what’s this about?’”

Sgt. Workman did not beat around the bush.

“We came by your house and wanted to talk to you.”

“Yes sir, what about?” Arthur asked.

“It’s about that FOIA request you made about the building plans for the mosque,” he told her.

It did not immediately dawn on her that she was actually not the one whose name was on the Freedom of Information Act request.

“I hadn’t filed it, a friend of mine did. Within seconds it occurred to me, but I didn’t want the other lady to be brought into it so I just acknowledged it and said ‘you know I file a lot of FIOAs, I filed one with the Health and Human Resources, with the auditor’s office, with Bureau for Medical Services, and more.”

“Yes, but those FOIAs are within the normal course of things,” said the stern voice on the other end of the phone line.

Why is it that this particular request, for information on a mosque project, was considered abnormal? And who decides what is NORMAL in a search of public-record documents?

She explained that she is an upstanding citizen activist and member ACT For America.

“I explained we are an organization with 750,000 members, we support the Constitution, American liberty, American values, and we fight terrorism and the concepts of Sharia law, which are antithetical to the U.S. Constitution.”

In the course of the 10-minute phone conversation, Arthur did a lot of explaining.

She explained that she was perusing the website of the local mosque when she came across a photo that caught her attention. It was of a man standing in the middle of the mosque speaking to the congregation. That man was Nihad Awad, executive director of Council on American-Islamic Relations or CAIR.

“He’s a terrorist supporter, he finances terror, and is part of a terrorist-tied organization,” Arthur told the sergeant.

That prompted Sgt. Workman to hint at the real reason for his inquiry.

“Well, we have a good relationship with that mosque and when he came here they notified us he was coming,” he told Arthur.

That sparked something in Arthur’s memory.

When she and a friend had gone to city hall on Jan. 31 to inspect the documents, the city manager and another city official stood over their shoulders the entire time. They made a point of telling the two women, “We have a good relationship with the mosque.”

A SAR is defined as “the sharing of information concerning activity, incident, or behavior that the reporting individual considers to be outside of normal parameters,” the website states.

Inquiring about a mosque was not NORMAL activity. Arthur had been flagged for suspicious activity, probably by a city official who has a good relationship with the mosque, or someone at the mosque itself.

In West Virginia, the fusion center operates under the supervision of the West Virginia Department of Military Affairs and Public Safety [DMAPS].

I called DMAPS Tuesday and asked what could possibly be suspicious about a 66-year-old insurance broker with no criminal record going to city hall and inspecting public-record documents.

Lawrence Messina, director of communications for West Virginia DMAPS, said he would ask that question of his superiors and get back with me.

“I have consulted with my colleagues here at the Office of the Secretary as well as with the W.Va. Intelligence Fusion Center and the W.Va. State Police (the latter is also part of this department). We decline to comment on this matter.”

Arthur, as a Jewish American, has every reason to be concerned that an anti-Semite like Awad would be invited to speak in her community. He is a supporter of Hamas, which is on the U.S. State Department’s list of designated foreign terrorist organizations, and he rejects the right of Israel to exist. [See Discover the Networks for documentation of Awad’s long history of radical statements, activities and affiliations.]….