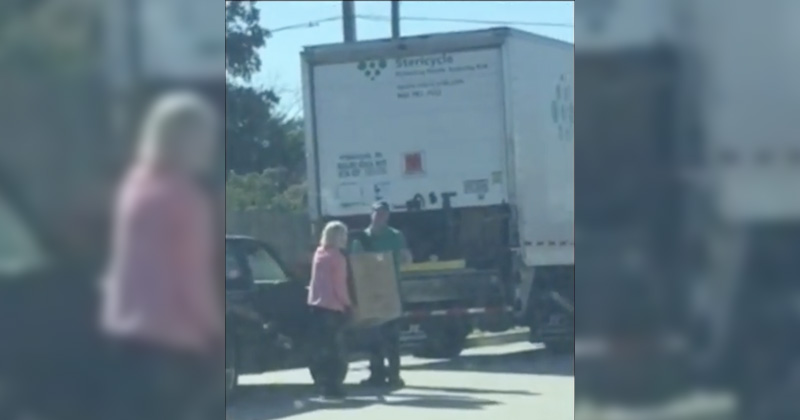 It isn’t bad enough that these abortion mills murder thousands of children every year, but then they turn around in an even more diabolical way and sell the babies’ bodies for money.

South Carolina abortion clinic Greenville Women’s Clinic had a representative illegally transport the bodies of babies they murdered and then transfer them to a Stericycle Waste Recycling truck at a local gas station.

The video below was filmed by pro-life group Created Equal.

The South Carolina Department of Health and Environmental Control saw the video and sent a letter to both Greenville Women’s Clinic and Stericycle, informing them of the allegations and demanding a conference on the matter.

According to the letter from the SCDHEC, “On December 8, 2017, the Department received a complaint alleging that Greenville Women’s transported waste to the Quick Trip gas station located at 1509 Grove Road, Greenville, South Carolina on June 21, 2017, October 4, 2017, and October 18, 2017, and that the waste was transferred to Stericycle, Inc. (Stericycle), a registered South Carolina waste transporter.”

Personally, I’m sickened to hear of the bodies of murdered children referred to as “waste,” but then this is what the culture of death breeds, a language the dehumanizes people.

Greenville Women’s Clinic is alleged to have violated the following:

Isn’t that amazing?  They are not considered guilty of murder.  No, no.  They are merely guilty of violating waste management regulations.  How sick is that??

And what’s the most that may happen to them?

According to the letter, they may face some monetary penalties.  This is how the state acts as God.  The crime they ultimately committed should cost the persons involved their lives, but the state will simply get its money with no real justice imposed.

The conference is scheduled for March 22 at 10 am in the offices of the Bureau of Land and Waste Management in Columbia, South Carolina.

Mark Harrington, Created Equal’s president, said “Abortionists and their medical waste enablers are the dregs of society and medicine and, therefore, are forced to conduct their nefarious activities in secret.”

“Because abortionists kill babies, they also break other laws,” he added.

“We thank the SCDHEC for bringing to light both the unlawful conduct of Greenville Women’s Clinic and Stericycle,” Harrington continued.  “We demand the SDHEC shut down both these operations over these violations, not just given a slap on the wrist.”

Amen, they should but there’s money at stake.

However, Personhood SC is believing that God may just deliver us a miracle here in South Carolina in which the Personhood Act of SC would effectively make the murder of the unborn illegal in the state of South Carolina and has the support of many representatives and the governor of the state.

This would go a long way in bringing people engaged in these activities to justice.

Let’s hope that we have the victory and stand against the holocaust we have allowed for far too long in our beloved South Carolina.