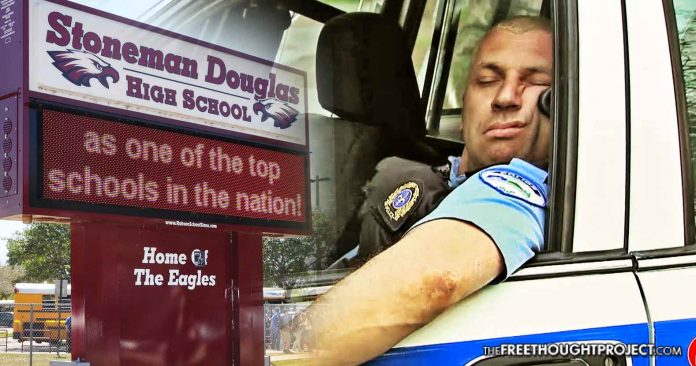 Parkland, Florida – When a mass shooting occurs at a school, the assumption may be that the school will go on to increase its security with the hope that such an event will not happen again. But the opposite seems to be occurring at Marjory Stoneman Douglas High School after a deputy who was supposed to be guarding the campus was found sleeping in his patrol car.

The Miami Herald reported that the Broward County Sheriff’s Office has launched an internal affairs investigation into Moises Carotti after he was found sleeping in his patrol car while he was supposed to be guarding the building where 17 students and teachers were killed last month after a suspended student reportedly entered campus and opened fire.

Another officer who was patrolling the campus was notified by a student that Carotti appeared to be sleeping in his car, and when the officer went to check on Carotti and confirmed the report, he called for a replacement.

“The sergeant responded to the marked patrol vehicle, which was parked on the Northwest corner of the 1200 building. He knocked on the window to get Carotti’s attention, who appeared to be sleeping,” a statement from the Broward County Sheriff’s Office said.

At the same time that Carotti was napping in his patrol car, Local 10 News reported that the brother of the suspect in the recent shooting, Zachary Cruz, was found riding his skateboard on campus. Although he had been told multiple times to avoid the campus, Cruz claimed he wanted to “reflect on the school shooting and soak it in.” He was then involuntarily committed under the Baker Act for the second time since the shooting.

Two students were then arrested at the high school on Tuesday for bringing knives to school. BSO spokeswoman Joy Oglesby said Jordan Salter, 18, pulled a 2-inch folding knife from her bra and showed it to a student who was making “sexual remarks she found insulting,” and Gavin Stricker, 16, had a 9-inch knife in his backpack that he was showing to students on the bus.

A third student is undergoing “a psychological evaluation” after he was reported for posting images on Snapchat showing off a gun in his waistband, bullets and threatening another student.

When the shooting at Marjory Stoneman Douglas High School was first reported, it left many wondering how a student who had already been suspended and who had been reported by multiple students after they heard his threats to commit mass murder in the form of a school shooting, could just walk onto campus without anyone alerting security.

Suspected gunman Nickolas Cruz was not alone—he was transporting guns, ammunition and body armor when he entered the campus. A teacher who witnessed the shooting said she initially thought the shooter was a police officer because he was dressed in full body armor, and was carrying a rifle she had never seen before.

While the shooting occurred inside the school, former deputy Scot Peterson can be seen on surveillance footage standing outside of the building and refusing to go inside and confront the shooter, even after he said over his police radio, “Be advised we have possible, could be firecrackers, I think we have shots fired, possible shots fired—1200 building.”

After Peterson received national media attention for his conduct during the shooting, it may be assumed that the deputies guarding the school would be more alert and aware that they are being watched. However, the latest case of a deputy caught sleeping on the job serves as a reminder that Broward County Sheriff’s deputies have a long history of corruption.

It should be noted that while Moises Carotti has been suspended and he is being investigated, he is still receiving his full salary, which means that taxpayers will still be funding his naps until the investigation is completed.