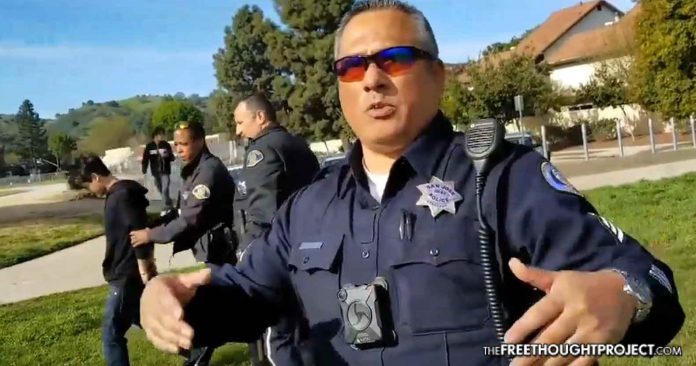 San Jose, CA — A video was submitted to the Free Thought Project this week showing a San Jose police officer tell the father of a boy—who had just been attacked by an adult—that it was okay for the adult to hit him because the boy used his freedom of speech. Seriously.

In a Facebook post on Monday, Manuel Miraball explained that his son was attacked by an adult on his way to school and when they called police for help, the officers arrested his son, not the man who attacked him.

So i went to work this morning and my 3 sons and my daughter all walk to school across the street. My 3 older sons go to a middle school right next to my daughters elementary school, so they walk her everyday then go to their school.
Today after dropping their sister off my sons were on their way to their school. Before they could even make it there, they were approached by some lady asking them hey where are you guys going, you need to go this way. My son ignored her and kept walking, she kept harassing them and then a guy got involved. My son told them that where he’s going and what he’s doing is none of their business. The guy got mad and said you ain’t shit bro, your all talk, to a 14 year old kid. Then ran up and started choking my son, at that time my son started fighting back and socked the guy in the face. He then called us while on our way to work and said dad and mom there is an older guy attacking me on the way to school. We get there and the officer asks my name, he immediately for whatever reason does a warrant check and probation check on me and my wife. After we came back clear, we asked to press charges on the guy who choked him. They let him go and arrested my son. There was even a witness another older guy who jumped in for my son, they never took his statement. They just arrested my son and now he’s in juvenile hall with his first charge as a minor.

Miraball then followed up his statement with video evidence of the cop telling him that his son was being arrested for his free speech and that the adult was justified in attacking the child because he talked to him.

“So, if someone says something to someone else, you’re telling me that that person can then go punch him in the face for expressing their first amendment right?” Miraball asks, likely expecting the officer to say, “no.” However, the officer agrees.

“Yes,” says the officer as he attempts to claim it is okay to initiate violence against a child for the mere act of talking.

“I got that on video,” Miraball says after the cop makes the insane statement. Police then haul the young boy off to jail, backing up their claim.

Certainly, if the boy had made threats of violence or if he said he planned on hurting someone, it would be justified to stop it. However, that does not appear to be the case in this scenario as the child was simply walking to school when the adult began to harass him.

After Miraball’s son was taken down to the juvenile detention center and the police actually examined the evidence, all the charges were dropped and the family was reunited, according to Miraball.

The Free Thought Project reached out to the San Jose police department for a statement on the incident, however, we have yet to receive a response.