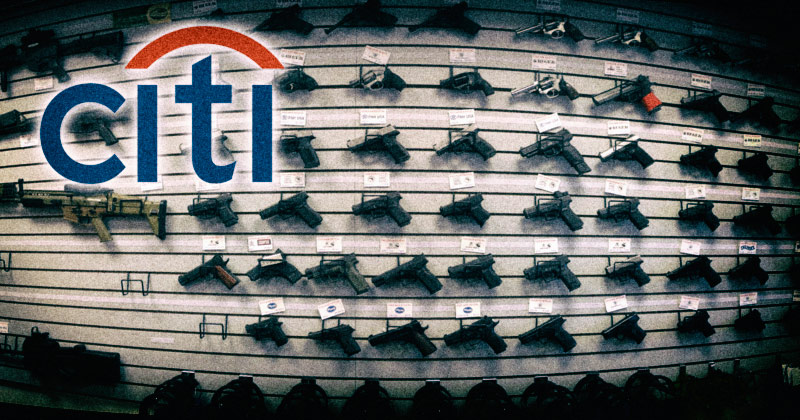 We’ve been told repeatedly over the last 30 years that transnational megacorporations have an obligation to rape our planet and our country because they’re “legally obligated” to “maximize profit for shareholders.”

Thursday, without consulting their stockholders, Citigroup imposed a host of gun control requirements on their clients which triggered their stock to immediately fall by over 4%: Citigroup wrote on their blog:

Under this new policy, we will require new retail sector clients or partners to adhere to these best practices: (1) they don’t sell firearms to someone who hasn’t passed a background check, (2) they restrict the sale of firearms for individuals under 21 years of age, and (3) they don’t sell bump stocks or high-capacity magazines. This policy will apply across the firm, including to small business, commercial and institutional clients, as well as credit card partners, whether co-brand or private label. It doesn’t impact the ability of consumers to use their Citi cards at merchants of their choice.

Here’s an email they sent to all their employees: These corporations are becoming our feudal overlords and leftists are literally cheering it on.

Since Donald Trump took office, corporations have been taking a growing role in public life, as progressive globalists try to use corporate power to advance their agenda. Leftist publications like the New York Times and Vox have gone so far to declare corporations the new “moral voice” of America — a stark contrast to the usual anti-capitalist attitudes of the left. This is the opportunity of a lifetime for the Republicans to step up and fight back against this insanity to defend their people but instead they’re busy selling out the country with this new $1.3 trillion omnibus bill.

It’s a good thing we have Republican control of Congress or the Democrats might bust the budget caps, fund planned parenthood and Obamacare, and sneak gun control without due process into an Omni…wait, what?

The cowardly Republican establishment needs to take a clue from the good people of Georgia and fight back against these corporations waging total war against us.

Mass censorship and corporate feudalism is not a winning platform.