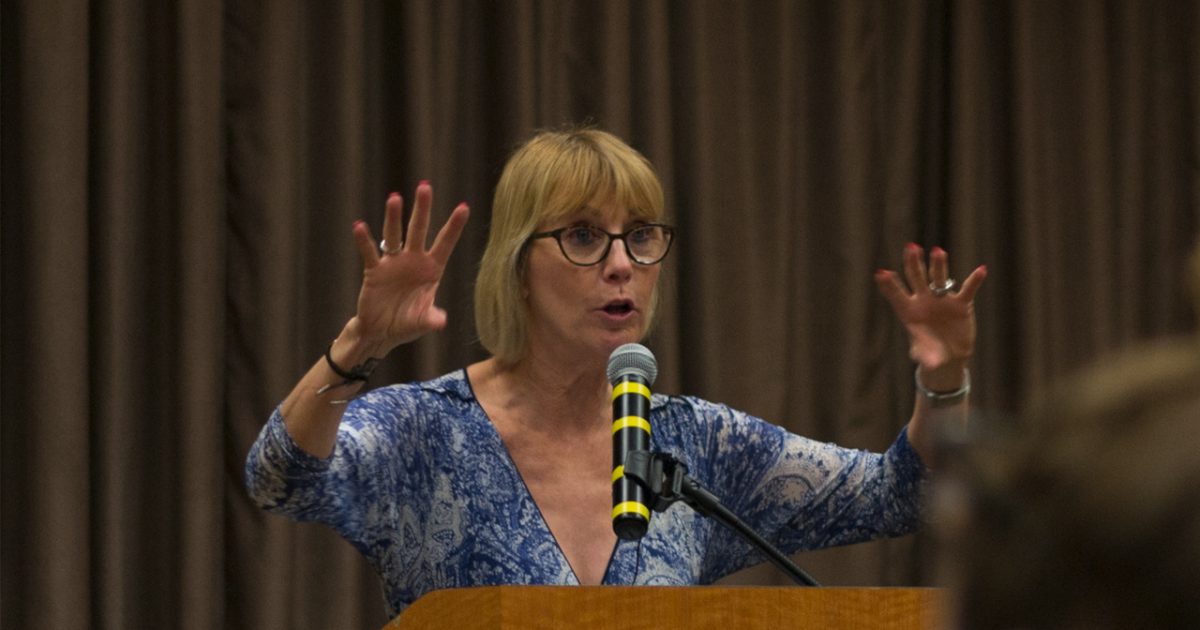 And you won’t hear about this in the mainstream media, I can guarantee you that!  Investigative journalist Laura Loomer was provided an audio recording of a meeting that occurred on Tuesday between students from Parkland, Florida and anti-Second Amendment activists as they told exactly what they planned to do this weekend during #MarchForOurLives.

The meeting was presented as “non-partisan” and claimed to be informative to students, their parents and staff members, including teachers of Marjory Stoneman Douglas High School.  However, it seems that leaders from the Democrat Party were in complete control of the meeting, and it not only exposed criminal activity regarding what they planned to do, but also the scripting of students’ talking points, as well as a misappropriation of school resources.

Held at the Marriott Hotel in Coral Springs, FL, the meeting was organized by Debby Miller, who teaches at Beachside Montessori Village, a Broward County Public School. Miller introduced herself as a representative for the Giffords Foundation, which has decided to fund and sponsor over 200 students, staff, and parents from Parkland, Florida to attend the march in Washington. Miller stated at the beginning of the meeting that the meeting space was donated by the Marriott Hotel.

The Giffords Foundation, a 501(c)(3) and 501(c)(4) non-profit founded by Gabby Giffords, the former Democratic congresswoman from Arizona, describes its mission as, “We research, write and propose policies that make Americans safer and mobilize voters and lawmakers in support of safer gun laws.”

During the meeting, Miller also revealed that “Southwest Airlines has decided to donate all of the seats” for everyone who is traveling to Washington with the Giffords Foundation for the illegal march.

In recent weeks, other airlines have entered into the political battleground where guns are concerned. Following the Parkland shooting, both United and Delta airlines cut their corporate ties to the National Rifle Association following the #BoycottNRA social media campaign that was launched by students in Parkland and liberal activists. However, the cutting of ties by these airlines quickly backlashed after Georgia lawmakers approved a bill that stripped out a $50 million tax break for Delta Air Lines by Republican lawmakers as a result of Delta’s new position on firearms.

When contacted for a statement regarding Miller’s claim that Southwest was bankrolling the anti-gun travel, Chris Mainz, a spokesperson for Southwest Airlines said, “That is not true. Southwest airlines is not providing any travel for students.”

Miller, who thought she was speaking to a room full of supporters with no cameras, revealed in the leaked audio what she called “top secret” information about the politically charged march, including Nancy Pelosi’s secret plans to participate in the anti-Trump and anti-Second Amendment protests.

“We’re also going to have things that are not on the agenda that are kind of top secret,” said Miller.  “So all of the press here just pretend like you’re not hearing this. We will be introduced on Capitol Hill by Nancy Pelosi, so that’s kind of cool. And it’s quite possible we are going to have a private meeting with Joe Biden. Don’t say anything to anyone.”

She also told students, “I want you to feel like it’s going to camp.”

What she meant by that was that they will be provided little Commie t-shirts and backpacks supplied by Giffords as they are in DC.

Here’s the thing though, Miller informed those in attendance that the Giffords Foundation failed to secure the proper permits for the march, thus making it illegal.

“It was supposed to be a march, but shockingly they wouldn’t give permits for the march, so the march became a rally,” Miller said.

Consider that since the march is illegal, Miller also was contributing to the delinquency of minors by encouraging them to “raise hell” by participating in the illegal march where they could be arrested.

“Now I’ve heard rumors from kids that since the rally is right on Pennsylvania Avenue and the White House is like a twenty minute walk up the street, that that might happen So it’s conceivable that we could leave at the end of the rally and walk to the White House where we rally some more, and hold up our signs and say our piece, and create a little hell. And then go to the [National Education Association] building and have hot chocolate,” said Miller.

When Loomer reached out to Miller regarding her illegal behavior and encouraging students to break the law, she responded, “I have no problem with civil disobedience.”

Miller also admitted on tape to abusing tax-payer resources designated for the operation of Broward County Public Schools. With a wink and a nod, Miller laughingly told attendees how she used school resources to print off nearly 200 copies of Giffords Foundation itineraries to organize the political event.

“If you don’t have an itinerary, it’s because when I got up to like 200, my principal was like, “I’m assuming that’s not for school,” and I was like “hmmm sure it is.”

When asked about her misuse of taxpayer resources to print propaganda, Miller said, “I was kidding. I was trying to be funny. I have never used the school printer for anything.”

Miller also told DANGEROUS she is not being paid by Giffords’s foundation.

A copy of the official #MarchForOurLives itinerary obtained by DANGEROUS’s Laura Loomer indicates that the Giffords Foundation has organized a three day leftwing political bonanza for the soon-to-be voting-age students.

Of course, the students and those in attendance protesting the Second Amendment will have private security officers who will be fully armed.  Oh, the irony!

I just wonder who is picking up the tab for all of this.  Is it the usual suspects or just Giffords and the school district?