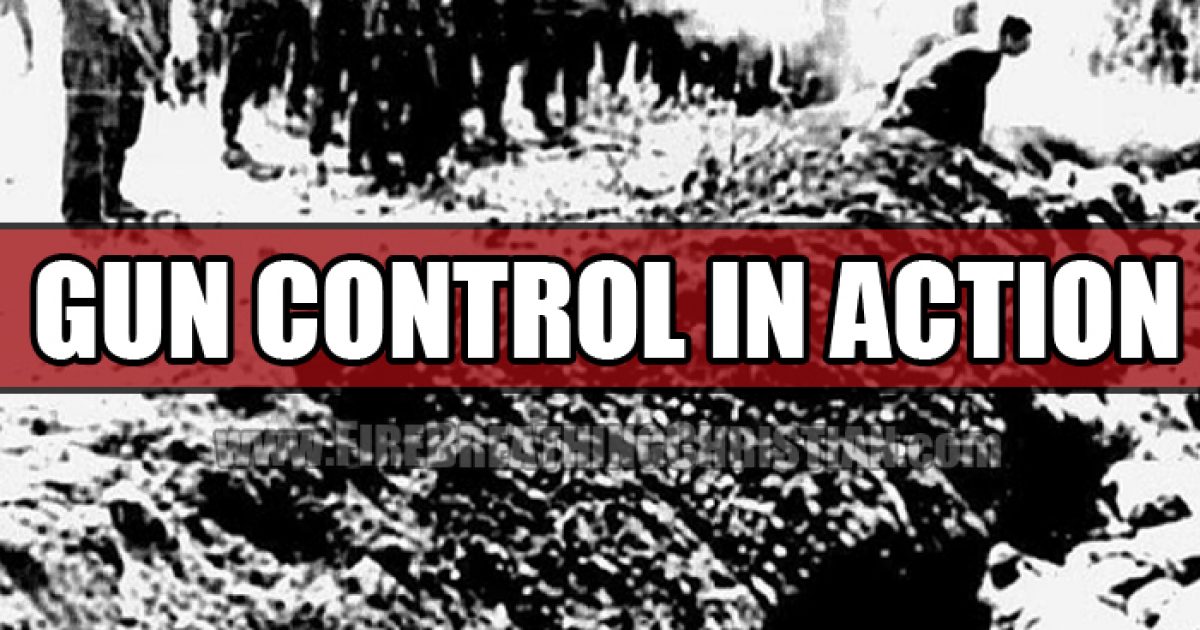 Every time there’s a mass shooting in America, advocates of centralized power in media, politics, and government use that event as an opportunity to do two things:

1. Continue to ignore the most massive of mass shootings and mass murders in human history while they…

2. Aggressively promote the core policy that made most, if not all, of those most massive of mass murders possible, namely: Gun control.

Without hesitation or delay, advocates of gun control (which is another way of saying “the consolidation of dangerous weapons in the hands of the most dangerous organization in all of human history: Government”) leap into action and are out in force making the case for disarming the population so that the State can finally enjoy what they see as a good, proper, and necessary State monopoly on the use of force and violence through guns.

In this context, some simple math might help us better understand exactly what’s going on here:

This formula has been proven true time and time again throughout human history. The twentieth and twenty-first centuries alone have provided both proverbial and literal mountains of bloody evidence as to the unparalleled threat of disarming masses of people and leaving them under the “care” of a well-armed, everything-managing State.

When we use the term “Mass Murder” in the above formula, it’s important to understand just how massive the “Mass” part really is.

Deep…at least as deep as the innumerable mass graves covering God’s green earth and filled with the unidentified bodies of men, women, and children who were brutally executed by their government (often if not always “for the common good”, of course).

In the twentieth century alone, the death toll imposed by armed governments upon disarmed citizens is staggering…and barely touched upon in most American State-managed children’s “education” programs. (Coincidence? Puh-leeze!)

Last year in What Gun Control Really Means, we elaborated on the simple yet profound evil of “gun control” this way:

“Let’s be clear about one thing: “Gun control” is not about the elimination of guns. It’s not about removing guns from the culture.

Gun control is about the consolidation of dangerous weapons in the hands of the most dangerous organization in all of human history: Government.

Which leads us to democide, a term defined as “murder by government”. More specifically, “the murder of any person or people by their government, including genocide, politicide and mass murder.”

Which leads us to the literally hundreds of millions of people murdered by government in the twentieth century alone.

Let that sink in: Hundreds of millions of people.

Truth be told, nobody wants there to be guns more than Leftists.

They love for the State to have all of these things.

To impose their ideology.

To enforce their will through the coercive power of the State upon people who are, practically speaking, incapable of resistance.

So as we endure yet another tragic event in which scores have been murdered or wounded by another deranged (and usually pharmaceutical-fueled) monster, let us pray for those directly impacted by this nightmarish situation while, at the same time, keeping our eye on the ball where “gun control” is concerned, lest our children or grandchildren find themselves defenseless in a land where tools of defense and aggression have been consolidated in the hands of the State.

For a brief, concise video exploration of this subject, please check out The Evil of Gun Control (1 Minute of Truth VIDEO).