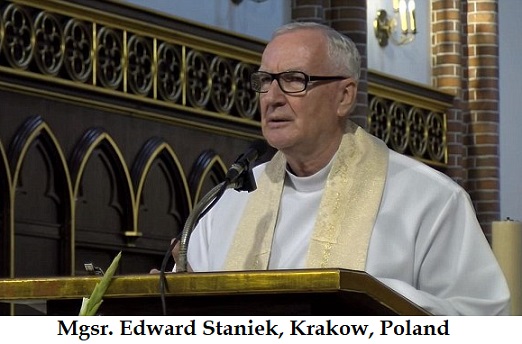 Pope Francis, real name Jorge Bergoglio, has called on Christians in Europe and the U.S. to open their doors to Muslim refugees and migrants. Last August, he went so far as to pontificate that refugees’ wellbeing trumps national security., while he himself is safely ensconced behind the Vatican’s 40 ft. tall walls.

Wall that surrounds the Vatican

Bergoglio’s stance on Muslim refugees and on other issues has so alienated some Catholic clergy that a former high-ranking member of the Roman Curia, the administrative apparatus of the Holy See, penned an open letter. Addressed to Pope Francis, the anonymous cleric lays out the “difficulties” he and “many others have with the way you talk and act.”

Speaking through various mouthpieces, Bergoglio’s response is to threaten his critics, both laity and priests, with excommunication, like Italian priest Alessandro Minutella.

All of which has resulted in what a cardinal calls a “pervading sense of fear” within the Curia, a church in schism, and conservative Catholics “in rebellion”. The editor of the reputable religious journal, First Things, went so far as to declare Francis’ papacy a failure.

The latest development is another, shocking indicator of church schism.

A senior conservative priest in Poland publicly said he wishes Pope Francis a quick death if he continues to refuse to listen to criticisms.

CBS13 Sacramento reports that on February 25, 2018, in a church speech in Krakow, Poland, prominent theologian and former seminar rector Monsignor Edward Staniek said Pope Francis has departed from the teaching of Jesus, and wrongly interprets mercy as opening up to Muslims and allowing communion for divorced Catholics.

Note: According to the Catholic Church’s longstanding teaching, Catholics who had divorced (not annulled) and remarried (outside of the Church) live in mortal sin and are not allowed Holy Communion.

Calling Pope Francis an “alien body” in the church, Msgr. Staniek said the pope’s words are used by secular media that are hostile to the church. Staniek said he’s praying for wisdom for Francis and a “heart open to the Holy Spirit, and if he does not do that, for a quick passage to the House of the Father” — meaning death.

Poland’s leading archbishop, Krakow Archbishop Marek Jedraszewski, said he “deplores” Staniek’s remarks with “great pain and regret”. Jedraszewski said he has discussed them face-to-face with Staniek, and that the Krakow diocese is praying ardently every day with only the best intentions for Francis.