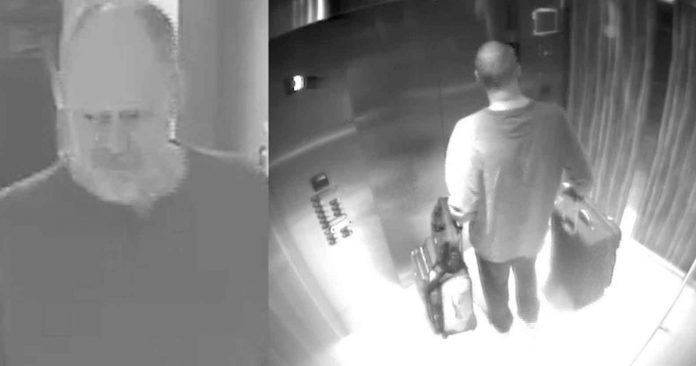 Las Vegas, NV — It’s been close to six months since Stephen Paddock allegedly rented a room inside the Mandalay Bay Casino Resort in Las Vegas and then opened fire on on thousands of innocent people, killing 58 or them and injuring hundreds of others. Since that tragic day, victims, media, activists, and citizens have been calling for the release of surveillance footage that shows Paddock inside the hotel and, until now, these demands have fallen on deaf ears.

In spite of the dozens of Freedom of Information Act requests by local media and lawsuits demanding the release the surveillance footage, somehow the New York Times was able to obtain the exlusive footage allegedly showing Paddock inside the hotel.

In the chilling video, we see Paddock alone and blending in, never looking suspicious and even raising his hands in delight when he won $1,000 while gambling and eating sushi.

However, behind the scenes, Paddock was filling his room with dozens of weapons and thousands of rounds of ammunition.

“Over and over in the clips, Mr. Paddock is seen leaving the Mandalay Bay for his home in Mesquite, returning with a dark minivan loaded with suitcases,” the Times reported. “Over and over, valets take his keys; over and over, bellhops stack his luggage on gold carts, helping him transport at least 21 bags over the course of seven days. As they take the service elevator upstairs, Mr. Paddock chats with them. He cracks a joke. He tips.”

The questions as to how Paddock was able to get this small arsenal in his room now appear to be answered thanks to the video—Paddock had the hotel staff load them up for him.

However, upon the release of this video, another question remains. How, exactly, did hotel staff not find bags with hundreds of rounds of ammunition—that would be far heavier than any clothing bags—suspicious?

Also, how, exactly Paddock managed to conceal the small arsenal of weapons from housekeeping is just as big of a mystery as to how he got them in the room in the first place without the staff noticing the weight of the bags.

“Toward the end of the footage, two guests carrying shiny plastic inner tubes get off the elevator, padding out in flip-flops. Mr. Paddock pauses to let them off, then gets on,” the Times reported. “It is the afternoon of Sept. 30. They seem to be on their way to the pool. He is on his way upstairs, where his guns await.”

What the video from the NY Times also reveals is that during the same time he was staying at the Mandalay Bay, he also rented a room at the Ogden just down the street. Internet records show that he researched the artists and setlists of another music festival which would occur just down the road from the Ogden.

This video provides some much-needed insight that the victims and their families—as well as all Americans—deserve to know.

However, it does not explain why he allegedly began shooting into a crowd of country music concert goers. It also does not explain why local police and the FBI have been covering up evidence and contradicting themselves repeatedly. Also a mystery is how the New York Times managed to obtain all this footage from MGM resorts and where is the rest of it. If they possess footage outside of Paddock’s room, surely they have the video of Jesus Campos being the ‘hero’ that police made him out to be. Where is it?

While the release of this footage is certainly a step in the right direction, this case remains shrouded in secrecy and deceit and until all the footage and evidence is publicly released, we all need to constantly keep asking these questions.