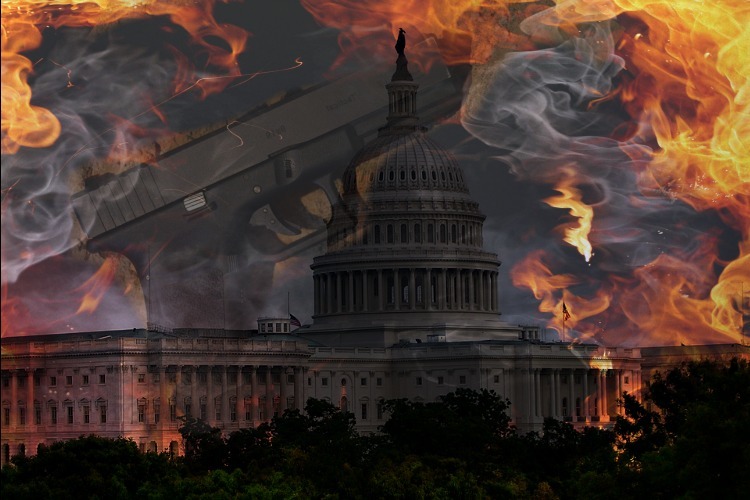 Everyone likes to blame the Democrats for gun control, but here’s a news flash: those of us who fervently believe in the Second Amendment are actually being betrayed by members of the Republican party who are in Congress right now. The budget bill on the table right now would gut the right to bear arms for millions of Americans, it’s already passed the House and Senate, and the Congress is controlled by Republicans.

UPDATE: President Trump, a Republican, has signed the bill which has no funding for his beloved border wall, reduces gun rights, and fully funds Planned Parenthood. Whatever your beliefs on those things, it’s pretty clear that it is not a conservative-friendly bill.

The spending bill that Congress hopes to pass is more than 2200 pages, according to Senator Rand Paul, who was outraged at being given less than a day to read the entire bill. Senator Paul live-tweeted his reading of the bill last night, and it’s a pretty safe bet that nobody else in Congress spent the evening reading it before they voted.

Well here it is, all 2,232 budget-busting pages. The House already started votes on it. The Senate is expected to soon. No one has read it. Congress is broken… pic.twitter.com/izvJlUEgUM

How the spending bill affects our Second Amendment rights

In this budget bill are some insidious things that affect our Second Amendment rights.

The bill revives an Obama-era restriction on firearms for senior citizens.

Just before President Obama left office, his administration finalized new regulations banning Social Security recipients from buying a gun if they have trouble managing their finances.

About 10 percent of all people 65 and older risked being classified as “financially incompetent” – about 4.2 million in all.

Using the Congressional Review Act, Republicans and two Democrats passed a bill overturning the regulation. But the bill did more than that. It also prevents any future president from reinstituting the ban without new legislative authorization from Congress.

Unfortunately, the spending bill passed Thursday allows the ban to be reinstituted because it reauthorizes the 2007 National Instant Criminal Background Check System (NICS) Improvement Amendments Act. This act allowed government agencies, not just the courts, to determine if someone is mentally incompetent to buy or possess a gun.

House Rules Committee Chairman Pete Sessions, R-Texas, said during testimony late Wednesday that he was “disturbed” that the bill would undo part of Republicans’ good work. But by Thursday morning, the House leadership had decided to go ahead with the measure. (source)

At the same time, the bill forbids the use of federal money for arming and training school staff. That’s right – our tax dollars will be put to work against us. And representatives that are supposed to be pro-gun are allowing it to happen.

Finally, the bill will authorize the CDC to research “gun violence.” But the CDC has been allowed to research this for years, despite what you see to the contrary from the MSM. In 1996, the Dickey provision prohibited the CDC from using government funds to advocate or promote gun control.” There is no such provision in the current bill.

It isn’t just Democrats who are passing this bill.

In the wee hours, it went before the Senate, where 60 votes were needed to pass it.  The Senate has 51 Republicans and 47 Democrats, and the bill was passed by a vote of 65-32.

In short, the “pro-gun” Republicans have betrayed their constituents yet again. Way to go, Republicans.

The President will most likely sign it according to White House budget director Mick Mulvaney.

“In order to get the defense spending primarily, (and) all the rest of our priorities funded, we had to give away a lot of stuff that we didn’t want to give away,” Mulvaney said. (source)

The spending in this bill is truly obscene. You’d think an American budget would be focused on American interests, right?

Here are the Republican representatives who voted against this bill. If your representatives are not on this list, you’ve been betrayed by someone promising to represent you who voted for laws he or she probably didn’t even read:

I’ll update with the Senators when I can find the list.

If you voted Republican to protect your 2A rights, you were betrayed.

The long and the short of this?

As long as our government passes bills with thousands of pages instead of single item bills, the public will continue to be betrayed and deceived. Those who believe that voting Republican will ensure their continued right to protect themselves have been deceived and until we refuse to keep putting these people in office who are there to serve themselves, not their constituencies, we will continue losing our rights as guaranteed by the Constitution.

How is voting for the “lesser of two evils” working out for you?

When are we going to say that we’ve had enough? At the rate we’re going, probably when it’s already too late and our corrupt system has enslaved us to the point that rebellion is futile.

The mainstream media is acting like Senator Rand Paul is a lunatic who is determined to shut down the government, but in reality, Senator Paul seems to be one of the only people in Washington DC who performing his due diligence.

Write to your local Senators and call their offices. (Find the contact info here.) Demand that they vote no on this spending bill.  We have to stop passing policies that haven’t even been read by those voting on them. Lawmaking should not be a game of “Let’s Make a Deal.”

Government shutdowns have happened before and they’re mostly theater. We’ve been perfectly fine without them.