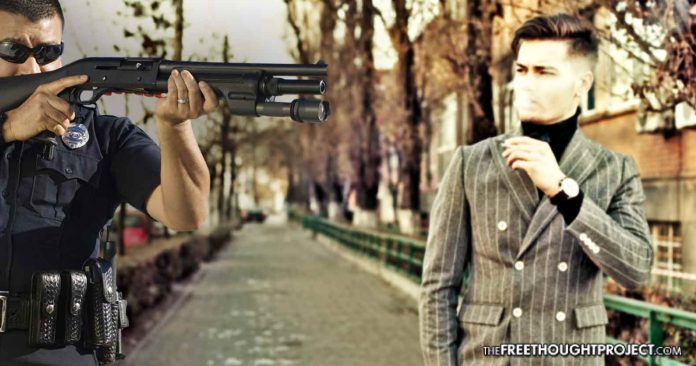 New York, NY — Currently, within the city of New York, it is against the law to smoke a cigarette on mass transit, in public restrooms and restaurants, businesses, libraries, sports arenas and gyms, zoos, bars, and parks, and a myriad of other places. These smoking bans are upheld by police who enforce them and they can and will use extreme force to make sure you comply.

Now, however, lawmakers want to have police go after people who dare to smoke and walk at the same time. On Thursday, a Queens Democrat proposed legislation to the New York City Council to ban smoking while walking. Seriously.

“In a perfect world, every smoker would have the self-awareness to realize that smoking and walking down a crowded sidewalk subjects everyone behind you to breathing in the fumes,” City Councilman Peter Koo said in a statement. “Unfortunately, we’ve all had the experience of getting stuck behind a smoker while walking down a crowded city sidewalk. If you want to smoke, stand off to the side. People can easily walk past you. But if you’re smoking and walking down the sidewalk, you’re forcing the people behind you to breathe it in.”

While no one is advocating for innocent bystanders to be forced to breathe in someone else’s cigarette smoke as they walk down the sidewalk, the answer to stopping it is certainly not going to be found in the police state.

However, this country appears to be unable to solve problems without using the force of the state.

As it stands, New York already has some of the strictest anti-smoking laws in the country for which police officers will already go after you for and banning smoking while walking will put it over the top.

To those who may be considering supporting this legislation because they get aggravated when they smell smoke, consider the following scenario.

An innocent person is walking down an empty sidewalk in an empty neighborhood and one of the many NYPD police officers who’ve been repeatedly documented harassing, beating, and killing innocent peopleuses the cigarette as an excuse to engage. This not only endangers the lives of innocent civilians but it also creates dangerous interactions for police officers who will likely receive resistance from people who think they’ve done nothing wrong and are being harassed.

If you think this sounds over the top, read the legislation. It specifically prohibits walking while smoking anywhere that is under the jurisdiction of the DoT.

But that is not all. As Courthouse News reports, in addition to the act of walking, Koo’s law would ban all smoking on pedestrian routes like medians as well as parking lots and on sidewalks adjoining public parks.

If you think this bill sounds tyrannical, you’re right. However, it should be expecting when we consider the fact that Mayor Bill De Blasio attempted to ban smoking inside your own home just 3 years ago.

Mayor de Blasio’s plan at the time to attempted to coerce developers and landlords into banning smoking inside of apartment buildings as part of his administration’s agenda to reduce smoking in New York City.

The claimed impetus behind the bill was so that neighboring tenants don’t have to inhale secondhand smoke.

To non-smokers, the smell of cigarettes is repugnant. No one wants to smell it. However, even as Koo admits, “We live in a city of over 8 million people, and we all share the same sidewalks. One person’s actions impacts everyone around them.”

Indeed they do—including turning innocent smokers into criminals for the mere act walking.

First, they came for the smokers.