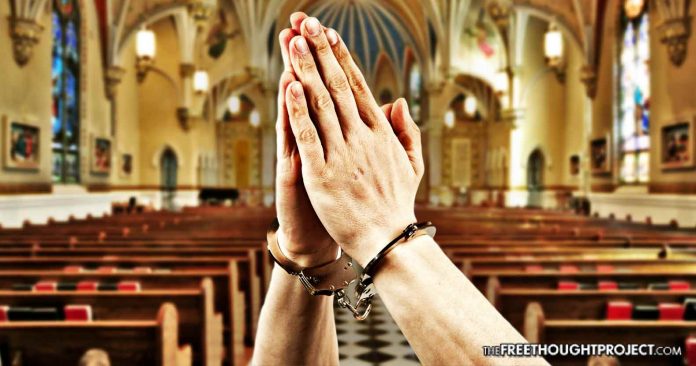 Saginaw County, MI — On Thursday, the residents of Saginaw County looked on as dozens of police officers raided two Catholic Diocese of Saginaw properties and the home of Bishop Joseph Cistone. The raids were carried out as part of an ongoing investigation into apparently rife sexual abuse in the church—and their history of covering it up.

According to Saginaw County Assistant Prosecutor Mark Gaertner, the police raids were necessary because the church was refusing to cooperate with the ongoing investigation into a torrent of sexual abuse allegations.

“Contrary to the statements of the diocese and the bishop that they would fully cooperate with law enforcement, they did not,” Gaertner said. “Therefore it was necessary for law enforcement to use other investigative tools, including search warrants.”

As MLive reports, Gaertner said search warrants were executed at the bishop’s home on Corral Drive in Saginaw Township, the rectory at Cathedral of Mary of the Assumption, 615 Hoyt in Saginaw, and the Catholic Diocese of Saginaw offices in Saginaw Township.

The scandal seems to be exploding the face of the church after one of their priests was arrested last month. Rev. Robert DeLand has been criminally charged after he was accused of sexually assaulting a 21-year-old and a child—both males—and both in his Saginaw Township residence paid for by the church.

DeLand’s arrest sparked a myriad of complaints alleging further sex abuse against adults and children alike, involving other members of the clergy. The complaints date as far back as the 1980’s which have flooded police departments, according to investigators.

Highlighting the breadth of the abuse, another priest was just suspended by the diocese after a minor came forward with allegations that he abused him. The diocese priest, Rev. Ronald J. Dombrowski, however, has yet to be charged.

According to MLive, six years ago, Cistone was accused of misleading a grand jury by not acknowledging that he witnessed the shredding of documents that contained the names of priests suspected of child molestation in 1994 while he was serving as a church official in the Philadelphia area. He never faced any criminal charges in that case.

The shredding of documents and failure of the clergy to cooperate with authorities—essentially protecting child rapists—should come as no surprise given the sordid history of sexual abuse in the Catholic church.

As TFTP reported last year, the “Pope explained that the Vatican has a 2,000-case backlog in processing clerical sex abuse cases and says criticism of the slow pace was justified. But he says more staff are being added and insists the Vatican is ‘on the right path.’”

For victims of the alleged abuse, “on the right path” probably translates into, “we’re doing nothing about it.” For the Catholic Church, arguably the largest religious organization on the planet, to know about 2,000 cases of alleged pedophilia in its ranks, and to be doing nothing about it, may be as egregious as the heinous acts themselves.

The renewed pressure on the Catholic Church, and specifically the Vatican, stems from the resignation of Marie Collins, a sex abuse survivor who resigned in March from Pope Francis’ sex abuse advisory commission.

Collins said she quit because her commission, formulated to root out pedophile priests was being met with, in her words, “unacceptable” levels of resistance from the Vatican. In other words, they were ignoring the recommendations set forth by the investigative and reform group.

Now, it appears that this constant pressure is turning into results as police are actually investigating and making arrests in Michigan—in spite of resistance from the church.

What’s more, as TFTP reported last year, after the #meToo movement brought so much attention to the Hollywood sexual abuse epidemic, #ChurchToo renewed the much-needed scrutiny into the allegations of sexual abuse happening in multiple religions.

As Twitter user Elizabeth Halford noted, after the hashtag “MeToo” went viral, several of the nearly 2 million users from around 85 countries who shared their stories, were sharing account of sexual abuse that occurred at the hands of religious leaders.

“Following the #ChurchToo hash with interest. Many #MeToo stories at the hands of the church,” Halford wrote. “And me? I was made to sign a purity contract at age 11. And witnessed a man confess from the pulpit having sex w/a child. Praised for his bravery. No further action.”

Hopefully, as the awareness campaign continues, the abusive clergy who remain protected by the church will be rooted out and brought to justice.