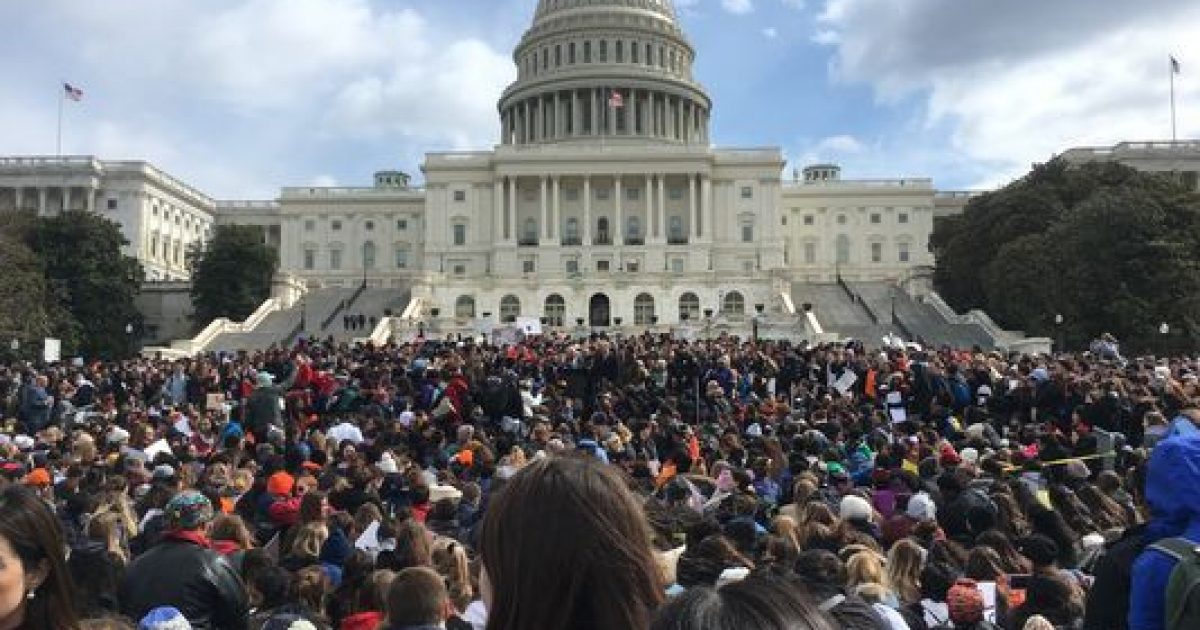 Well, I suppose this is about as close as you can get to being invited to the White House without actually being invited that I suggested would more than likely take place.  The White House issued a statement encouraging anti-Constitutionalists who stormed DC without permits praising their ability to exercise free speech and then touted President Trump’s latest attacks on the Second Amendment.

As children, who are not even of legal age to vote just yet, stormed Washington, DC illegally, with the encouragement of their teachers and other supporters on Saturday to protest the Second Amendment, the White House issued a statement in support of them.

“We applaud the many courageous young Americans exercising their First Amendment rights today.

Keeping our children safe is a top priority of the President’s, which is why he urged Congress to pass the Fix NICS and STOP School Violence Acts, and signed them into law.

Additionally, on Friday, the Department of Justice issued the rule to ban bump stocks following through on the President’s commitment to ban devices that turn legal weapons into illegal machine guns.”

OK, so yes, people do have the right to exercise free speech.  Of that, there is no doubt.  The question I have is, should the White House be praising these “useful idiots” for their protests which attack the Constitution?  After all, the President takes an oath to defend and uphold the Constitution and protect it from all enemies foreign and domestic.  I ask you, are these people not domestic enemies of the Constitution?

I believe they are.  This is not a dialogue of ideas.  This is little brainwashed, scripted Communists and their handlers going to the public square issuing political threats against representatives who would uphold their oath of office concerning the Second Amendment.

For instance, listen to little David Hogg, a foul-mouthed little boy who can’t even say his lines correctly and slanders alternative media hosts until he is called out on it and then he becomes as cowardly as the Broward cowards in the county he lives in.  By the way, there is no doubt that Hogg did not write his little speech here, but was written for him,just like the lines he was given after the incident in Parkland, Florida in Februaryand the scripted answers students were given to provide to the media.

“The cold grasp of corruption shackles the District of Columbia,” Hogg said.  “The winter if over. Change is here. The sun shines on a new day. And the day is ours. First-time voters show up 18% of the time in midterm elections. not anymore.  Now, who here is going to vote in the 2018 election. If you listen real close you hear the people in power shaking.”

He finished his little speech by promoting “democracy” flourishing rather than a Republic governed by laws.

“So, I say to those politicians that say change will not come, I say, we will not stop until every man, every woman, every child and every American can live without fear of gun violence, and to that I say, ‘No more,'” Hogg said.

Of course, Hogg’s arrogance was on display as he threw the Communist fist in the air and proclaimed to change the world.  Sadly, there is no way ever, until Jesus comes, that the world will not have to deal with gun violence of some sort, simply because there are guns and there are criminals.  Additionally, there is lawful gun violence, like when law-abiding citizens stop criminals with guns.

So, Hogg’s comments are more Marxist utopianism, which only results in government having the very guns he wants banned, and we all know what that results in… no wait, Hogg doesn’t know, he’s just a child.  So, for Mr. Hogg, and those with his mentality who have not learned from history, let me pose these two brief videos.

If Hogg really wanted to dampen gun violence, history teaches us that he is going in the wrong direction.

Sadly, so is President Trump and establishment Republicans and Communist Democrats.  Praising such comments that undermine the Constitution is truly deplorable and the White House would have done well to simply remain silent on it.

To add injury to insult, touting unconstitutional legislation that is a complete joke, like the STOP School Violence Act, which does nothing to keep schools safe and only grows government and unconstitutional spending (because the central government has no business in education in the first place) along with the unconstitutional Fix NICS legislation and the illegal banning of bump stocks by the executive branch which has no constitutional authority to do so is tantamount to the very attacks on the Constitution and Second Amendment these little Communists in DC this weekend are advancing.

So, whose side is President Trump and those in DC who are pushing this agenda really on?  You know, and if you have your eyes open, you can actually say it to others who are still in the dark and deceived by the two-party system.

And don’t tell me about the Deep State and don’t just blame Congress in all of this.  The President holds the veto pen in all of this.  He could have stopped any of the things I listed above, but chose to ignore the Constitution.  I’m with Ann Coulter that he may not get a chance in six months to do anything because he should be impeached for his conduct in these matters.

Yeah, because you’ll be impeached.

When you see these attacks on the Second Amendment coupled with the unconstitutional omnibus bill and you hear the talk about the only reason to pass it is “national security” and military, you know that tyranny is rising and dangerous times are just around the corner.