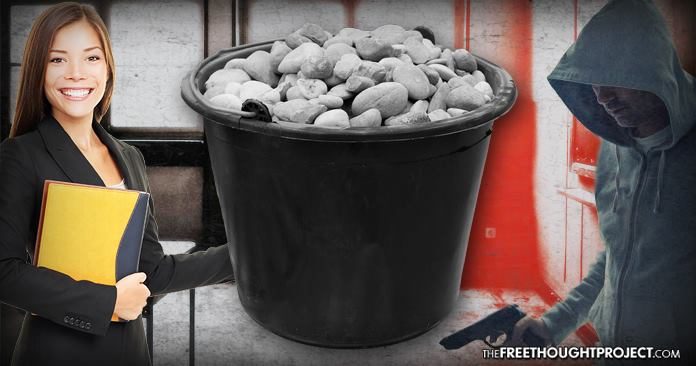 Schuylkill County, PA – A school district has announced that in its attempt to stop a possible mass shooter from killing students and teachers, every teacher will be armed with a 5-gallon bucket of rocks.

Blue Mountain School District Superintendent David Helsel told WBRE News that he believes this strategy will provide an unexpected line of defense that could take out the shooter, without him realizing what hit him.

“We’re empowering our teachers and our students to do something,” Helsel said. “They hit somebody in the head it could actually knock them out or even hit them in the temple, it could kill them.”

The school district consists of 2,600 students in three elementary schools, one middle school, and a high school, and while it may be one of the first to announce its plan to arm teachers with rocks, Helsel said the plan has been in the works for nearly two years, and it is the most he can do to arm teachers under the current laws.

Randy Nunemacher, a middle school math teacher, was supportive of the idea. He told WBRE, “We’re going to throw them at a person who comes through the door as hard as we can.”

Middle school math teacher Jill Kerstetter said she believes this plan gives power to both the teachers and the students because the students can also take part in throwing rocks at an intruder.

“It gives me just a little bit of confidence to know that our students aren’t just sitting targets,” Kerstetter said. “I’m not sure anyone has one answer, but doing something is better than sitting doing nothing.”

The announcement comes at a time when the country is debating whether teachers who have concealed handgun licenses and have received the proper training should be allowed to carry guns in the classroom.

Following a mass shooting at Marjory Stoneman Douglas High School in Parkland, Florida, student Colton Haab spoke out in support of arming teachers and faculty. He said that he believes football Coach Aaron Feis, who was one of the 17 people killed in the massacre, may have been able to take down the shooterif he had been allowed to carry his gun on campus.

“I believe if we did bring firearms on campus to teachers that are willing to carry their firearm on school campuses—and they got their correct training for it—I think that would be a big beneficial factor for school safety,” Haab said. “Because if Coach Feis had had his firearm in school that day, I believe that he most likely could’ve stopped the threat.”

There are a number of public schools in the United States that allow teachers to carry concealed weapons, based on the belief that replacing “gun-free” zones with warnings of armed personnel, will serve as a much stronger deterrent to intruders.

The Harold Independent School District in Texas was one of the first in the country to allow concealed carry, and Superintendent David Thweatt told KFDX News that not only are the weapons concealed, but the faculty members who carry them are approved by the school board, they receive additional training, and their identities are not made public.

“They keep it on them at all times,” Thweatt said. “Folks who come in, if they are coming in to do something like just happened, then they don’t know where they are going to meet resistance and that is very critical to our plan. So, it’s very simple, train the individuals and keep them here. Make sure people know that is exactly what we will do to answer an intruder.”

The debate over whether teachers should be armed also comes at a time when school resource officers are failing to protect students. In addition to a number of school cops who have been caught on cameraharming students, the sheriff’s deputy who was on duty at the high school in Parkland chose to wait outside of the school while children were murdered inside, instead of putting his own safety at risk.

Former deputy Scot Peterson can be seen on surveillance footage standing outside of the building and refusing to go inside and confront the shooter, even after he said over his police radio, “Be advised we have possible, could be firecrackers, I think we have shots fired, possible shots fired—1200 building.”

In the case of the Blue Mountain School District, Superintendent Helsel said he hopes the 5-gallon bucket of rocks in each classroom will serve as a deterrent to would-be school shooters who consider targeting their district.