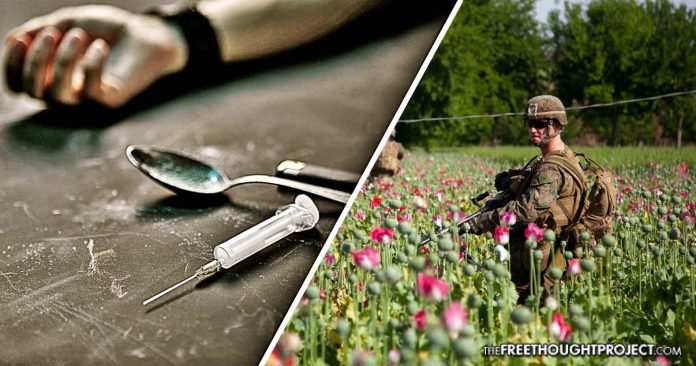 The Afghanistan War is the longest in United States history, and despite initial claims that the goal of the invasion was to keep Americans safe by destroying the Taliban and al-Qaeda, the result has been a massive increase in opium production that has fueled an on-going opioid crisis in the United States and ensnared more than 2.5 million Americans in heroin addiction.

As whistleblower and former FBI contractor Sibel Edmonds noted, before the U.S. invaded Afghanistan in 2001, there were around 189,000 heroin users in the United States. By 2016, that figure increased to 4.5 million—an estimated 2.5 million heroin addicts and 2 million casual users.

The number of heroin overdose deaths in the U.S. also skyrocketed with a 533 percent increase from around 2,000 deaths in 2002 to more than 13,200 deaths in 2016. The is part of more than 64,000 deaths attributed to drug overdoses in 2016, according to the National Institute on Drug Abuse.

If the United States’ goal was to eradicate the source of heroin in order to cut down on addiction and overdoses among Americans, then troops would be destroying opium fields with flamethrowers. Instead, the opposite is happening and U.S. troops have been caught guarding poppy fields. Under supervision from the U.S., Afghanistan is now responsible for producing 90 percent of the world’s opium supply.

As the U.S. warns that there is no end to the Afghanistan War in the foreseeable future, the country’s contribution to the world’s opium supply continues to increase. Coinciding with the completion of a massive troop surge, the United Nations Office on Drugs and Crime and Afghanistan’s Ministry of Counter Narcotics released a report claiming that the “area under opium poppy cultivation increased by 63% since 2016, reaching a new record high.”

As a result of the increase in 2017, the report acknowledges, “The significant levels of opium poppy cultivation and illicit trafficking of opiates will probably further fuel instability, insurgency and increase funding to terrorist groups in Afghanistan. More high quality, low-cost heroin will reach consumer markets across the world, with increased consumption and related harms as a likely consequence.”

Many users who are currently addicted to heroin did not start with the drug. They were originally prescribed opioid painkillers, and when their prescriptions ran out they began looking for alternatives. A 2014 study from the Journal of the American Medical Association claimed that “there is now growing evidence that some prescription opioid abusers … graduate or shift to heroin, at least in part because it has become more accessible and far less expensive than prescription opioids.”

An analysis by the Centers for Disease Control noted that “heroin use has increased across the US among men and women, most age groups, and all income levels,” over the years and that individuals who are addicted to prescription painkillers are now 40 times more likely to become addicted to heroin.

The Afghanistan War will cost American taxpayers more than $45 billion in 2018 and while the U.S. continues to monopolize on the country’s opium production, it is having a direct effect on the millions of Americans who have found themselves in the snares of a deadly addiction—and while most are paying for it with their taxes, thousands are being for it with their lives.