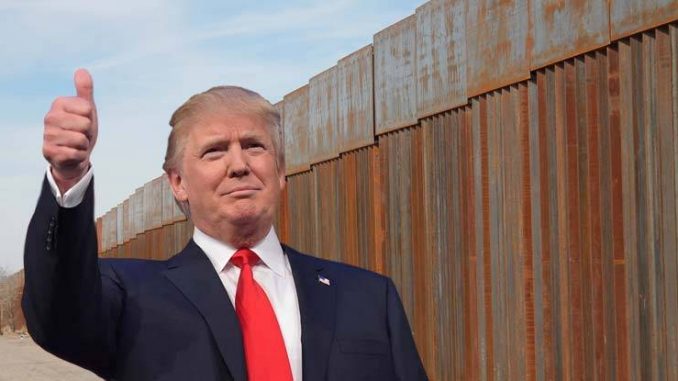 The Consolidated Appropriations Act of 2018 (aka HR 1625) funds the federal government through September 30, 2018. It is a bloated piece of legislation full of pork, which seems to betray many of Trump’s campaign promises by:

The reaction among Trump’s base to his signing of the “budget deal” was outrage and talk of revolt. (InfoWars)

On the same day that he signed the “budget deal,” President Trump also sent a fascinating and somewhat cryptic letter to the leaders of the House and the Senate (WhiteHouse.gov):

In accordance with section 7058(d) of division K of the Consolidated Appropriations Act, 2018 (H.R. 1625; the “Act”), I hereby designate as an emergency requirement all funding so designated by the Congress in the Act pursuant to section 251(b)(2)(A) of the Balanced Budget and Emergency Deficit Control Act of 1985, for the accounts referenced in section 7058(d).

The details of this action are set forth in the enclosed memorandum from the Director of the Office of Management and Budget.

What does the letter mean?

To begin, the so-called “budget deal” — the Consolidated Appropriations Act of 2018 — is actually an omnibus spending bill, not a federal budget bill.

Note: The word “appropriations” means funding or spending. The word “omnibus” refers to a legislative bill comprised of two or more general subjects that is designed to compel the executive to approve provisions that he or she would otherwise reject but that he or she signs into law to prevent the defeat of the entire bill.

Congress is supposed to create a new budget for the federal government each other, having been designated by the U.S. Constitution as having “power of the purse”. But Congress has failed in exercising that power by not passing a federal budget bill for FY 2018. It is precisely because they have failed to pass an annual budget that led to Congress passing a series of appropriations bills, like the Consolidate Appropriations Act of 2018, as “stop gap” measures to fund the huge apparatus of the federal government, because federal agencies cannot spend money unless funds are authorized and appropriated.

What is President Trump’s constitutional role in all this?

According to the National Priorities Project, “The Constitution does not, however, specify . . . a role for the president in managing the nation’s finances“.

Appropriations bills, like the Consolidated Appropriations Act of 2018, specify how much money will go to different government agencies and programs. There are two types of spending:

Both Congress and the President must abide by the mandatory spending. It is the discretionary spending part of the omnibus spending bill that President Trump’s enigmatic letter of March 23 addresses.

In accordance with section 7058(d) of division K of the Consolidated Appropriations Act, 2018 (H.R. 1625; the “Act”), I hereby designate as an emergency requirement all funding so designated by the Congress in the Act pursuant to section 251(b)(2)(A) of the Balanced Budget and Emergency Deficit Control Act of 1985, for the accounts referenced in section 7058(d).

(2) The Balanced Budget and Emergency Deficit Control Act of 1985, aka the Gramm-Rudman Act, was the first binding spending constraints on the federal budget, signed into law by President Ronald Reagan. The Act aimed to cut the federal budget deficit (which at the time, in dollar terms, was the largest in history) by providing for for automatic spending cuts (“sequestration”) to all departments and programs by an equal percentage, if the discretionary spending in Congress’ appropriation bills exceeds that year’s budget totals.

Alas, Gramm–Rudman failed to prevent large budget deficits. Balanced budgets did not actually emerge until the late 1990s when budget surpluses (not accounting for liabilities to the Social Security Trust Fund) emerged. However, the budgets quickly fell out of balance after 2000 and have run consistent and substantial deficits since then.

(b) ADJUSTMENTS TO DISCRETIONARY SPENDING LIMITS.—

(2) SEQUESTRATION [automatic spending cuts] REPORTS.—When OMB submits a sequestration report under section 254(e), (f), or (g) for a fiscal year, OMB shall calculate, and the sequestration report and subsequent budgets submitted by the President under section 1105(a) of title 31, United States Code, shall include adjustments to discretionary spending limits (and those limits as adjusted) for the fiscal year and each succeeding year, as follows:

In other words, in his March 23, 2018 letter to the respective leaders of the House and the Senate, President Trump is saying he intends to “repurpose” certain funds that Congress had appropriated as “discretionary spending,” towards “emergency appropriations, overseas contingency operations/global war on terrorism”.

What might those “emergency appropriations” and “global war on terrorism” be?

In his speech to the nation on March 23, announcing that he has signed the omnibus spending bill, President Trump called the funding of the border wall and illegal “immigration” — and by extension, sanctuary cities and states — a matter of “national security“. His March 23 letter to Congress suggests he intends to “repurpose” or use the discretionary funds appropriated in the omnibus spending bill to construct the border wall and combat illegal immigration, including sanctuary cities.

There is precedent of a president “repurposing” discretionary funds for some other purpose. He is none other than Barack Obama.

President Obama has irked close allies in Congress by declaring he has the right to ignore legislation on constitutional grounds after having criticized George W. Bush for doing the same.

Four senior House Democrats on Tuesday said they were “surprised” and “chagrined” by Obama’s declaration in June that he doesn’t have to comply with provisions in a war spending bill that puts conditions on aid provided to the World Bank and International Monetary Fund.

In a signing statement accompanying the $106 billion bill, Obama said he wouldn’t allow the legislation to interfere with his authority as president to conduct foreign policy and negotiate with other governments.

Earlier in his six-month-old administration, Obama issued a similar statement regarding provisions in a $410 billion omnibus spending bill….

“During the previous administration, all of us were critical of (Bush’s) assertion that he could pick and choose which aspects of congressional statutes he was required to enforce,” the Democrats wrote in their letter to Obama. “We were therefore chagrined to see you appear to express a similar attitude.”

[…] Obama issued his first signing statement after receiving a $410 billion omnibus spending bill. He said the bill would “unduly interfere” with his authority by directing him how to proceed, or not to, in negotiations and discussions with international organizations and foreign governments.

Lastly, there is also another way that President Trump can thwart the omnibus spending bill — by not spending some of the discretionary funds appropriated by Congress, in the interest of slashing the bloated budget.

Indeed, Politico had reported in August 2017:

Lawmakers and activists are preparing for the possibility that President Donald Trump’s administration, in its zeal to slash the federal budget, will take the rare step of deliberately not spending all the money Congress gives it — a move sure to trigger legal and political battles.

The concern is mainly focused on the State Department, where Secretary of State Rex Tillerson has drawn criticism for failing to spend $80 million allocated by Congress to fight Russian and terrorist propaganda . . . . Activists and congressional officials fear such practices could take hold at other U.S. departments and agencies under Trump.